I Want to Drive My Cybertruck

Our friend Millie is here to inspect the remodeled kitchen. Her voice carries, and I can hear her oohs and aahs from the other end of the house. Minus one ordered-at-the-last-minute overhead cabinet, a couple of glass-fronted doors, and backsplash tiling, our kitchen is operational again. The dishwasher, disposal, sink, cooktop, ovens, exhaust fan, and countertops are in and we’re cooking our own meals again. Curiously, while the square footage of the new kitchen is identical to that of the old, there’s more room: Donna, Polly, and I prepared separate parts of our first dinner together and all three of us had plenty of room to work … before, only one person at a time could do any serious cooking or prep; two was a crowd and three … forget it.

Here’s the before & after (the after taken before everything was done). I agree, the layout’s essentially the same, but I’m not deluding myself about there being more room: all three of us noticed the difference. Maybe it’s the placement of the cooktop … the way it was before there wasn’t much workspace on either side. There’s also more distance between the refrigerator and the island now, and that helps. The higher ceiling over the island has no practical effect, but there’s a psychological one. 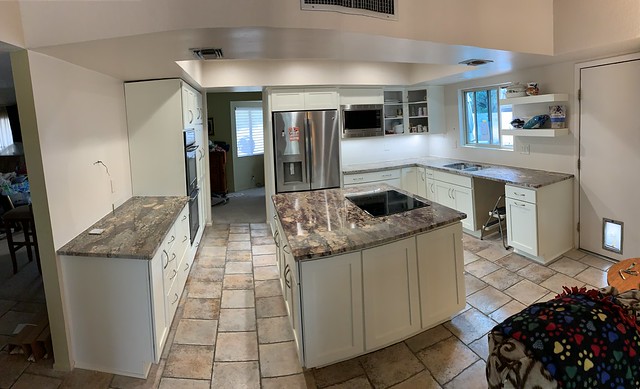 My frustration now is that the countertops are covered with stuff to be put away in the new cabinets and cupboards, and I can’t take a photo of the nearly-completed kitchen (well, I could, but I wouldn’t want to share it). Later today, perhaps, I’ll be able to get a shot of the entire thing. Here are a few details for now:

I did manage to get a nice photo of the adjoining family room the night we put it back together: the new paint on the ceiling and walls matches that of the kitchen. One of my sisters commented on Facebook that it looks warm and inviting. So come visit already, sis! 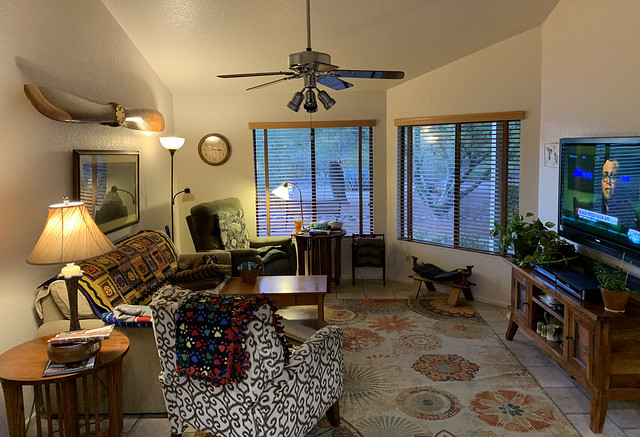 When this is all over, I’ll have a trailer load of stuff to truck to the dump. Good thing we have a truck and trailer, right? Speaking of trucks, ever since Elon Musk unveiled his Cybertruck, the chorus of Queen’s “I Want to Ride My Bicycle” has been playing on a loop in my brain:

Years ago I tacked carpet to a plank to make a ramp for Schatzi, our first dachshund, to use when getting on and off the couch. She loved it. Our auxiliary dachshund Maxie uses it still, but Mister B is determined not to and fights with us when we try to force him. He’s eleven now, and I don’t know how much longer he’ll be able to jump on and off the couch, so we’re working on it. My latest teaching technique is to put the harness on him and lead him up and down the ramp on a short leash. Donna tried to do it by simply grabbing his collar and I thought he was going to bite her: he really really hates that ramp (or maybe he just hates being told what to do).

We’re enjoying both Jack Ryan (Amazon Prime) and The Crown (Netflix), but I’m especially happy to see Donna as engaged as I am with His Dark Materials (HBO). I wish I could get her into The Man in the High Castle (Amazon) and Watchmen (HBO), but hey, I can’t get into some of her shows either, so we’re even. Now where’s this Jack Reacher TV series they’ve been talking about? I know we’ll both watch that! BTW, I wish more people would include which channels and streaming services run the TV shows they recommend. We’re at our limit on the number of streaming services and premium channels we can afford to subscribe to; it sucks to hear about great shows from friends, go looking for them on Netflix or Amazon, and only then find out we have to pay for Britbox or Disney to watch them. Disappoint us right up front, please.

I’m a few chapters into Margaret Atwood’s The Testaments; the brilliant and chilling follow-on to her most famous work, The Handmaid’s Tale. I don’t know if Trump will resign (even if he’s impeached, he certainly won’t be convicted, so throwing in the towel à la Nixon is the best we can hope for), but if he does we’ll have Pence, and if Pence has his way we’ll have Gilead. Atwood is a timely read, to say the least.

There’s an annual 100-mile bike race here called El Tour de Tucson, and elite riders from all over compete in it (Lance Armstrong used to be a regular before we knew he was a cheater as well). It’s always on the Saturday before Thanksgiving, which was yesterday. There are three starting points: riders can choose to ride the complete course, two-thirds of it, or a third. I’ve ridden the short course three times; Donna rode with me the third time. But that was a few years ago; since then I’ve been content to walk to the Houghton Road end of our subdivision to watch the leaders on the full course whiz by. In the past that always happened around 9 AM, some two hours into the race.

So at 8:50 AM yesterday I headed out with Mister B, and as we turned the corner onto the main road through the subdivision the lead peloton was going by, off in the distance. I don’t know what changed, but something must have. We got close enough to take a video just in time for the second pack:


Mister B was more curious about our MAGA-hatted neighbor than he was about the bicyclists, but I kept a firm grip on his leash anyway lest he dart out to join the fun.

Local color, that race, and honestly at my age more fun to watch than to take part it.

One thought on “I Want to Drive My Cybertruck”