It’s been a couple of years since the Southwest Woodfords assembled in one place. But family gatherings are what Thanksgiving’s for—at least that’s what it’s come to mean for many American families, ours included. Not only are we together, we even proved we can hold still long enough for a group photo.

I’d be remiss if I didn’t say thanks to our dear friend Mary Anne, who joined us for dinner and took our photo. Taylor’s boyfriend Jordan was here too, and our friend Darrell dropped by to say hello. In every way, it was a wonderful day. We got full use of our remodeled kitchen, even to having both ovens running at once. My contribution was a smoked brisket; Donna and Beth cooked the traditional turkey, stuffing, gravy, and green bean casserole; Polly was in charge of mashed potatoes; Mary Anne brought corn pudding and a caprese salad. Later that night (much later, with light groaning in faux protest), we managed to eat wafer thin slices of Beth’s awesome cheesecake and Costco pumpkin pie (which can’t be beat, and I’ll fight you if you disagree). Here’s part of the spread, which we served buffet style because there wasn’t room on the table for it all.

Our son, daughter in law, and grandson drove down from Las Vegas Tuesday evening, and so far we’ve had all of Wednesday, Thursday, and Friday (today) together. They’ll drive home tomorrow. Our granddaughter Taylor and her boyfriend drove in from Phoenix yesterday afternoon, had dinner with us, then drove back since they both had to work this morning. Polly didn’t have to work an overtime shift at Amazon last night, another blessing we’re thankful for.

Wanting to do something together today, we planned a day trip to Tombstone and Bisbee. Heavy rain woke us early this morning, or maybe it was our cell phones, beeping with severe weather warnings and a tornado alert for northwest Tucson. Twenty minutes later, the wind—and the even heavier rain that came with it—arrived in our northeast neighborhood, and it’s coming down still, hours later. Plan B was to see Ford vrs. Ferrari, but the theaters are sold out, everyone else in town having gone to Plan B as well. Thus we started down the slippery slope to the mall, the most dispiriting possible option for a post-Thanksgiving Friday. They offered me the option of bailing out and I eagerly accepted. Which is why I’m in my comfy Mister Rogers cardigan at home, uploading photos and writing a blog post, while the rest of the family kicks, elbows, and head-butts their way through Black Friday throngs.

I had a foot-pumped hydraulic motorcycle scissor lift in the garage, neglected and unused. You can jack it up while standing, but you have to get down on your knees to open the bleed valve and let it down, and I really have trouble doing that since my second knee replacement. But it’s the perfect lift for Gregory’s garage and his fancy BMW, so he’s taking it home to Las Vegas with him. I was going to get an expensive table lift for my bike, but now I’m thinking of just getting a better scissors lift, one that works with the air compressor and has a foot pedal for raising and lowering. It looks like the kitchen came in on budget, so there’s a little money left over … enough, I hope, for a new ceiling fan in the family room, a new flat-screen TV for same, and my motorcycle lift.

So yeah, life is good. I certainly don’t deserve it, but I’m thankful, and I hope all my friends and readers are happy and healthy as well. I know one friend is in hospital, and I’m worried, and if he’s reading this he’ll know I’m thinking of him. But I think I’ll send him a note and tell him so directly.

Meanwhile, a few additional photos from our family Thanksgiving week:

I suppose I should explain the first photo for new readers: on many a weekend in the mid-1980s, my son and I would ride our motorcycles over the causeway from Tampa to Clearwater to eat and drink at what was then the one & only Hooters. We still have a fondness for the place, even though it’s no longer quite the thing. Since Quentin was a little boy we’ve been taking him to different Hooters locations whenever we get together. I’ve documented every visit in a Flickr album titled The Boyz @ Hooters. You should click on it, if for no other reason than to watch Quentin grow to his imposing present 6-foot 5-inch height. My god.

You know what? I just realized I’m not done. I have to share the post I put up on Facebook this morning. I’m sure you all can relate: 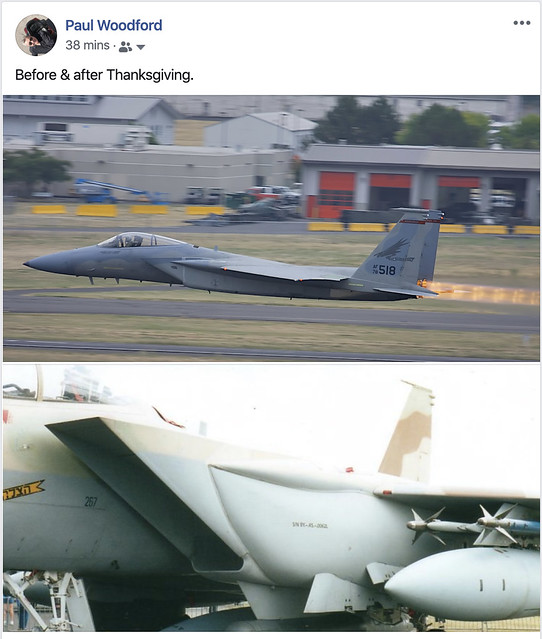