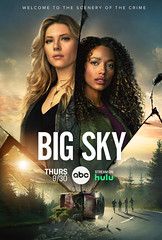 We’re happy to see a new season of Big Sky starting on Hulu. The show’s based on novels by C.J. Box, as is Paramount’s Joe Pickett, and we’re big fans of the books and the shows.

Big Sky’s actually a network show, running on ABC Wednesday evenings. Hulu subscribers get to watch it Thursday, one day later … but without ads. It’s worth the wait, to me anyway.

I mean, fuck ads. Hell, I waited more than two years for Netflix to finally stream the fifth season of Better Call Saul. Oh, I tried watching when it first aired on AMC, fast-forwarding through the ads, but then they started inserting snippets from the show in the middle of commercial breaks just to trick fast-forwarders into clicking “play” with three ads still to run, and I said screw you AMC, I’ll wait for Netflix. And now I’ll probably have to wait another two years before I get to watch the sixth and final season. Thanks, AMC, I’ll wait. That’s how much I hate ads. Streaming TV was made for folks like me.

Coming back to Big Sky, though … even though we don’t see the ads, the commercial break points are so obvious and frequent they chop the show up into little bites. Like many shows today, every episode of Big Sky has two to three storylines running simultaneously, and they switch every time there’s a break. It’s like listening to an excited and easily distracted person try to tell a coherent story. That’s not how TV series used to be, and I know this because I stream older shows like Buffy the Vampire Slayer. Buffy’ll be on the verge of staking a vamp when a scene ends for what was originally a commercial break … a second later when the next scene starts, you’re right back in the cemetery with Buffy and she’s driving the stake home.

We’re not binge-watchers, so we’re okay with the weekly model for new series on streaming TV. I’m not saying binge watching is bad, just that we rarely do it. Still, there are times we wish we could watch two episodes at once, especially when one ends in a cliff-hanger. I might have the patience to wait for a series to run its course and not start watching until every episode is available … as I did and am doing with Better Call Saul … but when it comes to shows Donna and I watch together, our patience doesn’t run that deep (if you haven’t guessed, she’s not into Saul, so I can deprive myself all I want when it comes to that particular show).

The raw spot on Fritzi’s throat is almost gone and the hair is growing back. We cleaned and rubbed it with Neosporin at first, then switched to Vaseline. She stopped scratching right away, which allowed it to heal. She has her collar back on now, which she seems to like. As for Mister B, he gets his last liver pill with breakfast tomorrow and then he’s off meds altogether. Next for him: getting his teeth cleaned. We’ll have to put off Fritzi & Lulu’s teeth cleaning until next year sometime.

Speaking of clean teeth, our dentist announced he’s done with Delta, so we’re shopping around for an insurance plan he will work with. And now I read a lot of pharmacies are leaving the Tricare network, effective mid-October. I don’t know if that includes Walgreens, where I get most of my prescriptions. I hope not, but I guess if it does I can switch to Costco, where Donna and the dogs get theirs. Who knew military retirees would have to take such an active role in managing the medical and dental care we were promised? And what about retirement pay keeping up with inflation, huh?

I’ve come down with grammar police dyslexia. I began to suspect GPD when I started seeing “your” and “there” for “you’re” and “their” in other people’s tweets and Facebook posts, but then, on a second and closer look, saw they’d actually written “you’re” and “their” correctly. I’m seeing mistakes where there aren’t any, which makes me fear I’m not seeing mistakes where there are. Which means I’d better turn in my grammar policeman’s badge.

Not to worry, I’ll still judge you privately if you screw up.