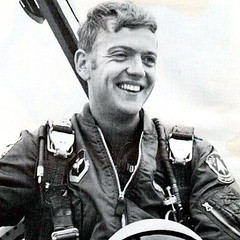 If you’re a Paul’s Thing regular you know I love aviation, military aviation in particular, and have written well over a hundred Air-Minded posts. I also post short flying-related comments and photos to Facebook and Twitter, small stuff that doesn’t necessarily show up here.

The other day I wrote a paragraph on the F-105 Thunderchief and posted it to Facebook. A friend commented, asking when I last flew a plane. It was the kind of question you can take different ways. Was he chiding me for still obsessing over aviation and aircraft more than two decades after I last had my hand on a stick? Or was he complimenting me on my boyish enthusiasm for flying, given that I’m now a senior citizen?

I’m going with Door Number Two. Yes, I’m a boy when it comes to aviation. I hope I always am. As a kid I dreamed of flying. When I should have been doing my homework I’d be imagining myself at the controls of a sleek, fast jet. I put the dreams aside in high school and college, mostly, but they came rushing back when I went flying with a friend in graduate school, and not long afterward I found myself talking to an Air Force recruiter.

I’m one of the lucky few who got to do what he always dreamed of. Flying fighters for the USAF was never a job. It was a profession in the best sense, and then some. It was what I believed, and still believe, I was meant to do. The fighter community is small and tight, subdivided even further by types of aircraft and missions flown. In certain aspects, being a member of that community is similar to being in a gang. In other aspects it’s a priesthood. You’re a made man or woman. It’s a way of life; it’s a whole life; you never really leave it. If you don’t go to the airlines afterward, you seek out civilian contract work in aviation-related fields. You get old, go on Social Security, and find yourself volunteering at an air museum. You stay in touch with former squadron mates. You keep up with what’s going on in military aviation and try to stay abreast of developments in tactics, avionics, and weapons. You might even start writing about your experiences.

Shoot, some of the old goats I volunteered with at Pima Air & Space Museum … men who flew EC-121s, KC-97s, F-100s, and B-47s in their prime … still built model airplanes. I haven’t built one in decades, but I’m thinking about getting back into it. Thank god there’s still some boy in this old man!

I haven’t flown F-15s since 1997, but I flew them for almost 20 years (and other jets before that). USAF pilots fly F-15s today and will for years to come. Air combat tactics haven’t changed in any fundamental way since I retired, and the cool new radars and upgraded missiles being fielded now were under development when I flew C models at Kadena. Going in the other direction, in the ten years I was a docent at one of the nation’s largest aviation museums, my knowledge of the whole history of aviation, military and civilian, from the Wright Flyer to the Boeing 787, grew enormously.

I’d have loved to write about flying when I was doing it every day but never would have had the time. I have the time now, and don’t plan to stop anytime soon.

Update (September 25, 2022): The idea for grouping aviation posts under the Air-Minded title came from the 1930s comic strip Air-Minded Junior by W.D. Tipton and J.H. Mason. It’s exactly the kind of thing that would have appealed to me as a boy … and still does.

Since I started using Air-Minded as a category title for aviation posts, two fellow travelers have come to my attention. First is the Australian aviation historian Brett Holman, who publishes the Airminded blog. He appears to have launched his blog in 2005, around the same time I started using Air-Minded. Just last week I discovered The Airminded Podcast, hosted by Tyson Wetzel, a retired USAF officer and pilot like me.

Way I figure it, the hyphen makes a difference, and Air-Minded (with all credit to the 1930s comic strip that inspired the name) is mine. At the same time, I’m happy to have airminded company in the blogging & podcasting arena. I wonder, do either of them know about me and my blog? Maybe I should send out a ping!