Resting From My Labors

Thinking about Labor Day, which we observed yesterday with company, dinner, and a movie. Company was our friend Mary Anne and her dog Anthony; dinner was hickory-smoked ribs, potato salad, grilled veggies, and corn on the cob (plus deviled eggs and mango gelato from Mary Anne); the movie back-to-back episodes of Justified on Hulu.

Here I am early Sunday morning, setting up the smoker and grilling area: 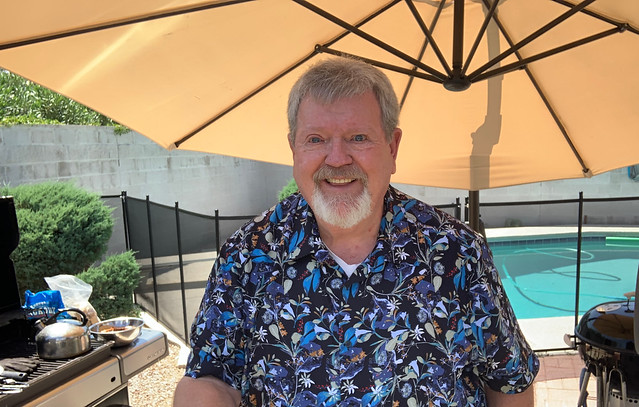 I had plenty of canine help during the three hours the ribs were in the smoker. Helping me smoke and grill is old hat for Mister B, but it was the first time the new girls, Lulu and Fritzi, have seen me at it, and they were fascinated. We made sure all three dogs got to share later that night (the meat only, though … we don’t give them bones because our first dachshund, Schatzi, once got a bit of rib bone stuck in her throat and we haven’t forgotten that scary experience).

But back to Labor Day, which of course is about celebrating organized labor and the gains of American working men and women. There must be some proposed or pending Senate bill that threatens Arizona’s right-to-work (anti-union) law, because there’s a saturation TV ad campaign here against unions, telling Arizonans to call Mark Kelly and Kristen Sinema and demand they vote against changing the existing law. The ad’s central scare message, as always, is that workers might be forced to … gasp, the horror … pay union dues.

Jesus, do Republicans ever update the playbook? To which the obvious response is, why should they? If it ain’t broke, don’t fix it. Workers’ rights and better pay? UNION DUES! Infrastructure? SOCIALISM! Police reform? BOOGA-BOOGA!

Donna and I never had union jobs. Neither did my folks nor Donna’s dad, but her stepfather was a United Autoworkers Union member at Detroit Diesel, so there’s organized labor DNA in the family.

Of course I was in the Air Force for 24 years, and to me it felt like a union job … a living wage, vacations, sick leave, education benefits, a retirement plan that’s hard to beat … although with a paternalistic, socialist overlay. The boss, Uncle Sam, provided nearly everything (including housing and medical) but of course you couldn’t strike.

Later I worked for a civilian defense contractor providing ground and simulator training for upgrading A-10 pilots at Davis-Monthan AFB. The classroom and sim instructors, retired A-10 pilots, saw a threat coming and tried to organize, asking me and my 14-person courseware department to join them, but the company shut us down immediately with a different threat: instant dismissal. What the instructors wanted to organize against was forced unpaid work at nights and on weekends to meet the contract, which the contractor had grossly underbid in order to win it. And that, of course, is exactly what the contractor had in mind for us. When the threat became reality I refused to demand or even ask my people to work overtime for free, so they got rid of me and found someone who would. It was an upsetting time in my life, but I was never so happy to put a job behind me.

Oh, you bet I’m pro-union. And a socialist as well. Happy Labor Day!

So far today, official Labor Day, I’ve taken the dogs for a walk and cleaned up the Fortress of Smoke™ after yesterday’s activities. At some point I need to fix the cantilever patio umbrella you seen in the top photo. It’s one of my more regrettable Amazon purchases, bought just before the COVID pandemic hit in 2020 and a disappointment ever since, tipping over in the slightest breeze no matter how much I weigh the base down with sand and water. I had to take it down in mid-smoke yesterday when a breeze came up. As I turned the crank to furl the umbrella it came apart. Of course the place it came apart is at the apex of the umbrella, out of reach unless I disassemble the entire thing. I was so angry I looked the umbrella up on Amazon and wrote a blistering review. I’m taking it as a given the people who made this inferior product aren’t union.

I shared the experience on Facebook and friends are giving me advice on umbrellas and shades that do work, which I appreciate, but tell you what, I can buy a lifetime supply of $60 end-of-season-sale patio umbrellas from Ace Hardware for what I paid for that worthless cantilever POS from Amazon, and will stick with those for now. I have the heavy bases for them already, so no need to buy more of those, and when the fabric wears out after two years in the Arizona sun I’ll just get new ones. It’s nice to switch the colors around anyway. 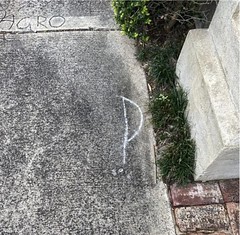 Never gets old, the stories people tell to scare one another whenever there’s talk of strange, possibly occult chalk marks on the ground.

I haven’t posted any Hash House Harriers content in a while, so here’s a social media thread prompted by a nervous citizen’s question to his neighbors in Perth, Australia:

Somebody came down our street today putting chalk marks outside some driveways — anyone know what they’re for?

The layout of the comments puts the newest ones on top and the oldest at the bottom, but if you enjoy conspiracy theories and urban myths, start at the top and scroll your way down.

Some of the first responders identified the local Hash House Harriers club as the likely culprit,. The nervous citizen who posed the question in the first place was happy with the answer and left this comment in the thread:

“Solved! The Hash House Harriers suggestions were correct. Thanks for all the funny/interesting/foil hat suggestions!”

Actually he had to post the comment twice, because conspiracy theorists and scare mongers kept adding new funny/interesting/foil hat suggestions, suggesting everything from thieves “chalking” a house for pending B&Es or dog-nappings, hobos marking homes where they might get free pie, identifying drug deal drop-off locations, or even racist graffiti marking residents for harassment by white supremacists. I particularly like this one:

“Your house is most likely marked for a number of reasons. Dogs What security system you have or even how many people reside in the house. Then again it could be marked as well as code on your neighbors house. Just make sure everything is locked up, I would maybe be sporadic with leaving times even have someone go to your house randomly during the day. If your council has smart watch have them drive past and notify the police that symbol has been placed. If it is a crim chances are they know exactly who did it”

Well, before I poke fun anyone else, I should mention that I live in a 33-home subdivision with at least two neighbors who drive their teenagers to the school bus stop on the corner and wait in their cars until the kids have safely boarded before driving the few hundred feet back home, because you never know, right? In my Hash House Harrier days I laid more than one trail through our neighborhood, and it’s at least possible those neighbors thought the marks I made on the street in front of their homes had been left by a pedophile ring.

p.s. I had eyelid surgery a few months back. As you can see in the top photo, there’s still a bit of difference from one eye to the other, but not much. I’m delighted with the results and no longer feel the need to put sunglasses on before taking selfies. Should have done it years ago.