I saw this thread on Twitter yesterday and read it with interest. In it, a new Tesla Y owner describes quality issues with his just-delivered car: crooked doors and panels, a rear bumper that droops on one side, a filthy interior, paint underspray on the doors. 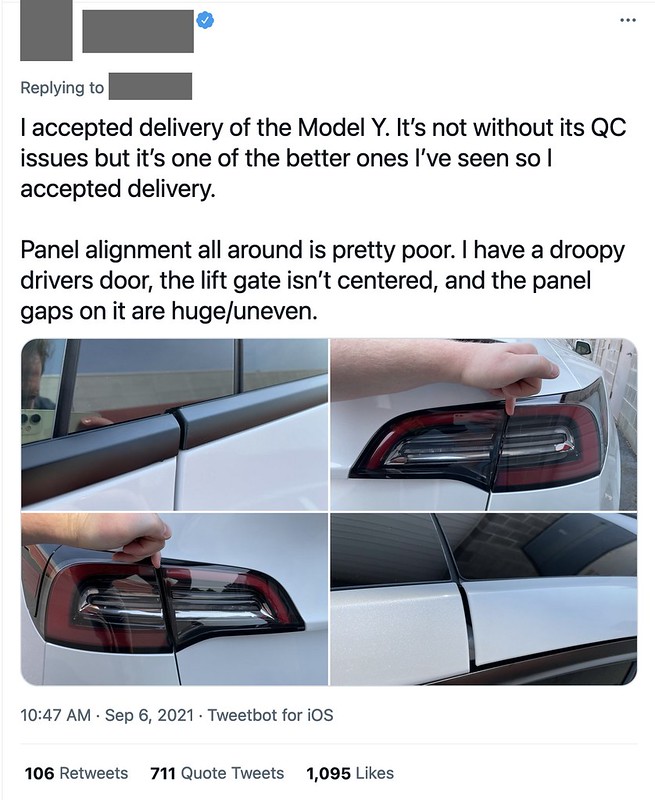 His rationalization for accepting a brand new car with such gross defects?

QC issues aside, most of them are fixable and/or ultimately not a big deal. I’ve seen a lot of Model Y that are A LOT worse. Rejecting meant another several weeks before a car replacement arrived and rolling the dice with the likelihood the second car was even worse.

I’ve seen a lot of quality/fit & finish/post-purchase factory support complaints about Tesla products on Twitter and Facebook. The only Teslas I’ve had an opportunity to examine closely (I’ve never ridden in one but a friend offered to let me drive her Model S and I regret not taking her up on it) seemed pretty nice to me, but next time I get a chance to look one over I’ll pay more attention to the alignment of doors and hatches.

Used to be, crooked doors, hoods, trunk lids, and chrome strips were standard equipment on American cars. Standard and expected — crap quality was a given. New car buyers felt themselves lucky if they managed to buy one that wasn’t built on a Monday or Friday, because shit wasn’t quite as crooked. But that was 40 to 50 years ago. After Toyota and Datsun shook things up, the quality of American cars improved. And by improved, I mean vastly.

Donna and I drove VWs and Toyotas (and a beloved Datsun 280Z) from the 1960s into the 1990s, at which point we started buying and driving American: Chevys, Fords, Lincolns, GMCs, all of which have been very good. We plan to buy one more, probably our last — and for that reason it has to be really good.

In May, Rachel Maddow led off her nightly news hour with a segment on the new Ford F-150 Lightning electric pickup truck. That’s the night we decided our next (and likely last) new car is going to be an electric vehicle — specifically the one she shilled for, a Ford F-150 Lightning.

They’re taking reservations for F-150 Lightnings now. According to the company website, customers can start placing orders later this month, and deliveries will begin in the spring of 2022.

As with the aluminum truck bodies Ford introduced a few years ago, the company has a lot riding on the success of the electric F-150, and I’m betting the quality will be world-class or at the very least as good as that of the company’s current gas and hybrid vehicles. Ditto the level of post-purchase support buyers can expect if there are problems. In fact, we’re counting on it.

It was only a matter of time before the big Detroit automakers entered the EV market.* Ford first, it seems, with GM and Chrysler to quickly follow. Once that happens, we’ll all be driving EVs in no time.

I feel I’ve written a commercial, but I really can’t write about planning to buy an EV without naming the brand, so I’ll let what I’ve said here stand. I must say, in addition, that from our first Ford purchase, a gas F-150 we bought new in 1994, we’ve been impressed with the fit & finish, paint, interiors, and overall quality of their products. To be fair, we have the same high regard for the 2016 GMC Sierra pickup truck we drive now, but GM is being coy about when it’ll start selling all-electric Chevy and GMC pickups … my guess is it’s waiting to see how things work out for Ford before going all-in.

* Yes, I know Big Three automakers have built and sold EVs before, and in the modern era GM was there first with the EV1, introduced in 1996. But I’m talking about major Detroit automakers putting all-electric versions of best-selling cars and trucks on dealership floors, a major commitment as opposed to a limited test. And with that, it seems to me Ford is taking the lead.