Air-Minded: These Boots Are Made for Flyin’

A friend, knowing I’m a Cold War veteran who flew fighters in Europe, sent a link to this interesting video, titled “Who Won the Air War? (A Strange and Unexpected Story of Cold War Intrigue).”

Fair warning: it’s almost 10 minutes long. If you don’t want to sit through it, here are the main points.

USAF aircrew members in my day (1974-1997) often wore customized flight boots. I say “customized” because they were most often USAF-issue flight boots that had been modified with side zippers. A few wore tailored custom-made civilian boots, but they got them in Korea or the Philippines, not Germany. Anyway, now I know where the popularity of side zippers came from. I never trusted those side zippers, thinking they’d fail during an ejection, and wore only the lace-up issue boots when I flew.

In the video, the narrator says the USAF outlawed non-issue flight boots in 1967 after a pilot wearing them ejected and lost his toes when the boots came in contact with the lower edge of the instrument panel. USAF flight boots, he says, are steel-toed. He lost a bit of credibility with me there. The issue flight boots I wore did not have steel toes.

A quick aside on boots. In Alaska, we were issued both insulated flight boots and bunny boots. The insulated ones looked like regular flight boots but were thicker. The bunny boots were white and super-thick (you looked like Bugs Bunny wearing them). I didn’t like flying in bunnies because they were so big I feared they’d catch on the something in the cockpit in an ejection. At one point my squadron mates and I talked Alaskan Air Command into buying us Sorels, really warm civilian boots with thick felt inners. Our plan was to fly with them, but we quickly realized they wouldn’t stay on your feet in an ejection … there was no way to lace them tight enough … so we used our taxpayer-funded Sorels for snowmobiling and hunting trips. I still have ’em, though they don’t get much use in Arizona.

When I started flying fighters in 1978, the hot item on everyone’s list was a custom-made helmet. With the USAF-issue flight helmet, you had to glue foam pads of various shapes and thicknesses to the inside of the shell to get a proper fit. You could never get it quite right, and the helmets were uncomfortable on longer flights. Civilian helmet companies would send reps to visit active fighter squadrons. If you decided to buy one of their helmets, you scheduled a fitting with the rep, who’d encase your head in soft plastic that shaped itself to the contours of your skull, then hardened. The mold became the liner of your custom-fit helmet, which you’d get by mail a month or so later. I bought mine from an outfit called Protection while in F-15 training at Luke AFB in Arizona. It cost around $600. I justified it as a lifetime investment and wore it every time I flew, which included a few 10-hour ocean crossings, and it was always comfortable.

Sometime during the late 1980s, the USAF began to make custom-fit flight helmets in-house, using the same molding process the civilian companies pioneered. I had one fitted at Kadena Air Base in Japan and wore it for the last part of my flying career. It was every bit as comfortable as the Protection helmet, and even lighter. 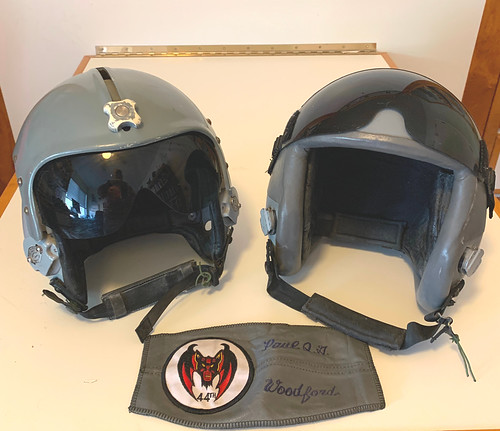 Google tells me you can still buy custom-fit flight helmets from civilian sources. They run around 1,200 bucks today. I doubt many military aircrews buy them, though, issue helmets being as good as they now are.

Now for the part about the assassination teams. I don’t doubt the bad guys knew who we were and where we lived. Whether they planned to take us out on the eve of World War Three is another thing. I flew USAF fighters in the Netherlands for more than three years, December 1978 to March 1982, living off-base in a small Dutch community. Most other pilots lived off-base as well. You’d think if the USAF had reason to believe enemy teams had us on a hit list they’d have dropped a few hints. They didn’t.

Whatever, the other side knew a lot more about us than we did about them. We were stationed in free, democratic NATO member nations, after all. The bad guys could exploit our civilian neighbors, using them as sources of intel, as well as local nationals working on US bases. Then there were the kids who hung around base perimeters and took photos of departing and arriving jets, tracking tail numbers and sharing information with a network of plane-spotters in other NATO countries. We knew their network was compromised, but there wasn’t much we could do about it. Every unit had its resident spy, tucked in among local civilian “friends of the squadron” who were allowed to visit the officers’ club bar and socialize with aircrews, support staff, commanders, and families. The Soviets likely knew each of us by name, where we lived, what routes we took to and from base, and where we were at any given moment: off-duty at home or at the club, flying a local training sortie, sitting alert, or deployed on temporary duty.

And that was just Europe. The same stuff goes on in South Korea and Japan; certainly in the Central Command AOR. In the continental US and Alaska? Maybe. Probably.

By the way, I had a great pair of German boots. Donna got them for me when we lived in Germany in the mid-60s, almost a decade before we joined the USAF. They weren’t custom fit and thus probably didn’t come from the Probst company (the makers of the boots featured in the video), but they looked the same and were awesomely well-made, with counter-sunk Philips head screws securing the soles and heels. I used to joke to Donna that marching Wehrmacht soldiers must have stopped every 20 kilometers in order to re-torque those screws. Those boots lasted thirty years. I never flew with them, but they racked up hundreds of hours of motorcycle time.