Or should that be Phather’s Day Photoblog? 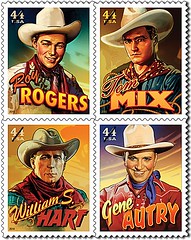 I’m reading C.J. Box’s Joe Pickett novels, a series of mysteries set in a mountainous, sparsely-populated corner of Wyoming and featuring a state fish & game warden who finds himself and his family threatened by bad men (and a few hard-to-forget women) intent on raping the West. They’re great reads, engrossing and impossible to put down. I’ve read 20 Joe Pickett novels and am about to start on the 21st, Dark Sky, the only one left. After that I’ll have to wait for Mr. Box to write another. Happily for me and his other fans, he’s a prolific writer and shows no sign of stopping.

Riding with Joe Pickett in one or another of his soon-to-be-destroyed Wyoming Fish & Game pickup trucks, I’ve learned a few things about Stetson hats, the brand Joe wears. For one thing, when Joe goes into the Burg-O-Pardner, he always rests his hat crown down on the counter. Turns out it’s a cardinal rule with Stetsons. Set ’em brim down, eventually the brim loses its characteristic curl. Joe takes care of his hat, and if he hadn’t lost his first Stetson in a narrow escape from death, he could’ve gotten 30+ years out of it, an entire career.

From Cowboy Hats in History:

Today’s cowboy hat has remained basically unchanged in construction and design since the first one was created in 1865. As the story goes, John B. Stetson and some companions went West to seek the benefits of a drier climate. During a hunting trip, Stetson amused his friends by showing them how he could make cloth out of fur without weaving.

After creating his ‘fur blanket,’ Stetson fashioned an enormous hat with a huge brim as a joke, but the hat was noted to be big enough to protect a man from sun, rain, and all the rigors the outdoors could throw at him. Stetson decided to wear the hat on his hunting trip, and it worked so well that he continued wearing it on his travels throughout the West. In 1865, he began to produce the first incarnation of his big hats in number, and before long, Stetson was considered the maker of this newfangled headwear, the cowboy hat. The original Stetson hat sold for five dollars.

You see where this is going, right? Read the books, get the hat. We had to wait a bit … these things ain’t cheap … but Father’s Day came and the time was finally right, so Donna took me to a nearby Western wear outlet and bought me one. It’s a Stetson Skyline 6X. It’s a mid-range hat, probably equivalent to Joe Pickett’s working Stetson, not a high-end number like the $800+ one Governor Rulon buys Joe for taking down a criminal conspiracy that would have devastated a large chunk of Wyoming. But it’s my Stetson, and I’m going to take good care of it.

First order of business in the care department was the stampede string you see hanging down my back. You put it under your chin to keep the hat from blowing away in gale force winds, a meteorological phenomenon triggered by, in my case, donning a hat. I purchased it along with the hat, and it may be a bit too Western for me … before replacing it with something plainer, though, I’ll give it a chance to grow on me. It does go well with the hat, I have to say. Next will be a hat holder for the pickup truck, one that’ll protect both the crown and brim when I’m not wearing it. They make those? Yup. And I bet Joe Pickett has one.

We celebrated Father’s Day on Saturday, stepping on Juneteenth’s toes, because it was an off day for Polly and she could join us for dinner. I got to pick the menu: dry-rubbed ribs, corn on the cob, and potato salad. Donna made flan for dessert. Greg and Beth sent an Amazon gift certificate and Polly gave me a little wireless keyboard that works with the smart TV so I don’t have to use arrow keys on the remote when searching for movie titles. It’s pretty cool, but the best part was the wrapping paper she designed and printed for it.

It was far too hot to smoke or grill outside, so I had to cook the ribs in the oven. I braved the heat early in the morning to crank up the patio umbrellas. They’re festive and never fail to cheer me up. The pool is just right these days, but we don’t go in during daylight, just at night. 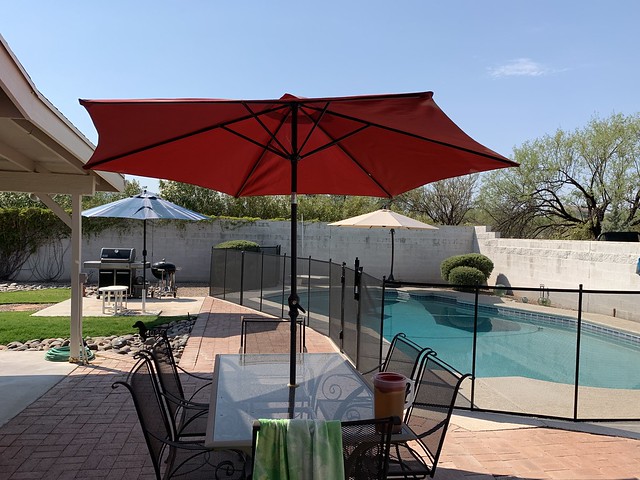 Having celebrated Father’s Day a day early, I’m entitled to scoff at conformist sheep dads who observe their Hallmark holiday the day the government tells them to.

On-On to the Glorious Fourth, the next big event on the calendar, with our neighborhood parade and brunch. We were on deck to host last year’s post-parade brunch, which of course was cancelled for COVID. Knowing we have a few die-hard Trumpite anti-vaxxers in the hood, we were reluctant to take it on this year, but another neighbor stepped up and is hosting. We’ll definitely be at the parade, but haven’t decided whether we’ll brave the brunch.

Life is good. I’ll get back to the ranting and raving you’re all used to soon. For now, I’m content to be content. Let me just note for the record, though, that monsoon rains and cooler temperatures can start any goddamn time now. Hello? Is anybody listening?