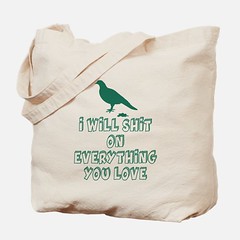 You may have noticed a trend here toward fewer topical posts. More and more, I write about life, books, and aviation. Two windows are always open on my desktop monitor: one is this blog, the other the draft of the memoir I plug away at. The personal rides shotgun these days; politics and current events ride behind, nattering away like mothers-in-law.

When I do look over my shoulder to engage with those backseat drivers, I link to sources so you can check that what I’m saying has some basis in reality. That’s not as easy as it used to be. Major news sites hide stories behind paywalls. Other sites have content-blocking popups that demand you turn off ad blockers.

With persistence, I can usually find open sources. I don’t know what effect the FCC’s gutting of net neutrality will have on my ability to continue doing so, but I expect it to get harder, not easier. Still, I promise never to get so sloppy I start making shit up and then linking to my own blog as “proof,” as Sean Hannity (Stupidest Man on TV & Radio Combined™) does here: 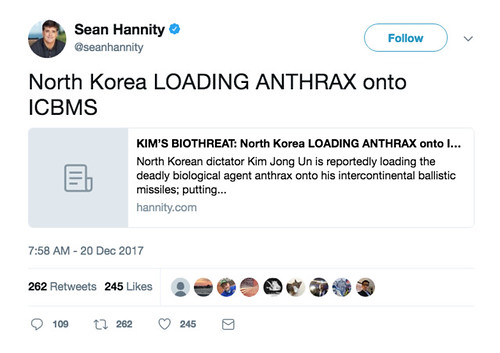 Do I think the North Koreans might want to do this? Yes, I do. Do I think they have the capability to do it now or in the near future? No, I do not, and even if they did, would it work? I’m thinking back to 1993, when the Aum Shinrikyo cult sprayed aerosolized anthrax from the rooftop of their headquarters in a Tokyo suburb. A few people reported foul odors. A few people vomited.

Aum Shinrikyo struck a much harder blow two years later with the sarin attack they carried out on the Tokyo subway: that time they killed 12, severely injured another 50, and caused temporary vision problems for 5,000 more. In 2001, in the wake of the 9/11 terror attacks, 5 Americans died after opening envelopes and packages containing powdered anthrax, but as with the Tokyo subway passengers, they’d been exposed to large doses in close quarters. So no joke, but the agent, whether anthrax or sarin, is less effective when spread thinly through the air, as would be the case with a missile attack. I hope.

In any case, I’m pretty sure Hannity’s less concerned with anthrax and more concerned with helping his master Trump distract the stupids from the ever-more-obvious realization that the Russians have installed a useful idiot in the White House.

Oh, you want a link for that? Here’s one.

I offered to make breakfast this morning and Donna took me up on it. I stepped away to use the bathroom and the dog, seeing his chance, snarfed down the bacon I left on the kitchen countertop, about half a pack. He had the shits Sunday and Monday and just got over it; surely a relapse is imminent. Mr. B keeps us on our toes.

Donna’s sister Georgie and her husband Don arrive tonight. They’ll stay with us until the 30th of December, overlapping two days with our goddaughter Natasha, who comes on the 28th and stays until the 4th of January. We’re having an open house on Christmas Eve, with clam chowder and a shrimp boil. I keep thinking we’ll grow up some day and just have a quiet holiday season at home (actually, we did just that two or three years ago, and it kind of sucked).

I had an appointment with my dermatologist yesterday, just to ensure I’ll have blisters on my face while we have company. My first skin cancer appeared just before I retired from the Air Force in 1997, 20 years ago. It was on the side of my nose, and every one since has been on my scalp and face. Most have been small pre-cancers that disappeared after being frozen with liquid nitrogen, but I’ve had at least a dozen minor surgeries, and my face is pretty scarred up these days. This time, in addition to freezing eight spots on my face, she zapped two pre-cancers on my left arm. Well, that arm gets more sun than the right one (because driving, duh).

The air museum is open every day except Thanksgiving and Christmas. My regular day is Monday, which this year is Christmas; it’ll be the first time in almost eight years of volunteering I’m getting a day off. I had some free time last Monday and wandered into the back lot where we keep the old fire tankers. Looking over the fence into the restoration yard, I saw volunteers working on the lower wing panels of our NB-52A, formerly one of the flight test motherships for the X-15 rocket program, and took a couple of photos.

A friend who works in restoration told me they’d discovered serious bird damage to the underside of the BUFF’s wings. Normally we screen or plug any openings in display aircraft, and I’m sure we did with this one, but somehow birds found a way into the wings and nested there. Over the years, acidic droppings from generations of birds ate into the lower wing panels, rotting them away. What restoration first thought would be an easy touch-up job turned into a major thrash, and it may be a while yet before this historic aircraft is back on display. Corrosion is the enemy of aircraft maintainers the world over.

I was sitting in the museum snack bar Monday when a sparrow smacked into the plate glass window by my table. It fell to the sidewalk and lay there, dead to all appearances, its little feet pointing skyward. A few minutes later it began to stir, not dead after all but merely concussed. It got back onto its feet, sat still for a few minutes, then flew away. Considering what it and its mates have done to our B-52, I hope the headache lasted a good long while.