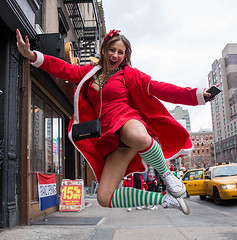 Last night Donna asked me if I couldn’t see my way clear to working up a little Christmas spirit. Sigh.

Millions are affected by holiday season depression. I always thought they were weak, but now I’m ready to admit I have a touch of it myself. It certainly helps explain my seasonal grumpiness, which rarely lifts before Christmas Eve, sometimes not even till Christmas morning itself.

Donna asked me to look in the garage for her elf stand. “Fuck that elf,” I mumbled, and she heard me. Christmas spirit. I’m working on it, honest.

Donna’s sister Georgianna and brother-in-law Don are here through the end of the month. Georgie and Donna are sorting through our bins of decorations and plan to put most of them up today, except for the tree stuff. We’ll trim the tree tomorrow night.

Decorating the tree on Christmas Eve is a tradition from Donna’s family. Her parents waited until the kids went to bed to string the lights and hang the ornaments, and the kids’ first sight of the decorated tree was on Christmas morning. Which sounds sweet, but a couple of years ago Donna fessed up to the real reason: they were poor and their folks didn’t even get a tree until Christmas Eve, when the lots were closing down and giving away what they had left. Ho ho ho.

Never mind the real reason for decorating the tree on Christmas Eve, though; it’s the way we’ve always done it, Donna’s sister Georgie too. We’re not waiting until the last minute to get the tree, though: the girls picked one out two days ago, and it’s a beaut. Don helped me mount it on a stand and bring it into the house. Mr. B lifted a leg on it while it was still outside, so it’s been christened.

Our goddaughter Natasha and her daughter Georgianna arrive on the 28th and will stay through the 4th of January, overlapping a couple of days with Georgie and Don (yes, there will be two Georgies in the house). All the more reason for me to turn that frown upside down, lest I harsh the mellow. I’m making clam chowder and boiling shrimp on Christmas Eve, then baking a ham and smoking ribs on Christmas day. That’ll cheer me up—it always does.

Last night Don and I drove to Rosati’s to pick up a pizza. Don looked over to the west and said “Holy shit lookit that!” I looked and couldn’t at first figure out what I was seeing. I quickly realized it was a rocket launch, and the only place it could have come from was Vandenberg AFB on the California coast, 600 miles west of Tucson. 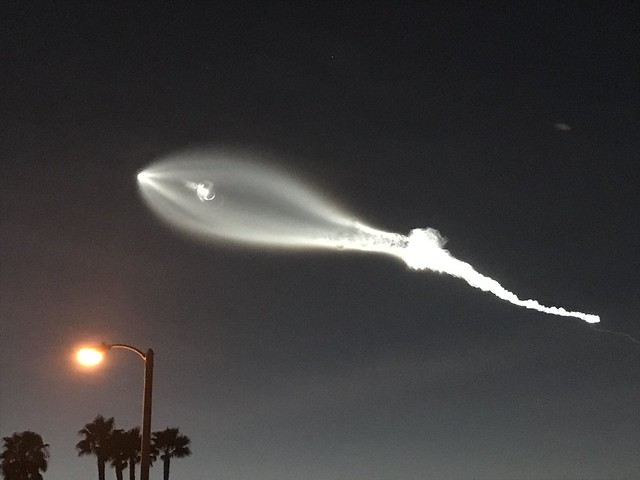 I wanted to pull over and take a photo, but didn’t think the cell phone camera would be up to the task. Fortunately, others did, and I was able to find this photo online (no idea who took it, there’s no credit given). There’s a video too, taken from a Phoenix TV station’s news chopper:

Tucson News Now
I Googled “rocket launch vandenberg” as soon as we got home: it was a SpaceX Falcon 9 rocket taking ten communications satellites to orbit. Not only was it a successful launch, it was done with a reused first stage that had been to space before. The reason we could see it so clearly in the early evening Tucson sky is that the sun was still up over the Pacific, shining through the rocket’s trail from the west.

From news reports I’m reading this morning, there were massive War of the Worlds-style freakouts all over the Southwest, and rightly so: it was impressive as hell. Well done, Elon Musk!

What times we live in!

Donna and Georgie were sitting on the couch next to me last night, our two dachshunds between them, just the tips of their snouts poking out from under a comforter. I couldn’t resist taking a photo and sharing it with you this morning: 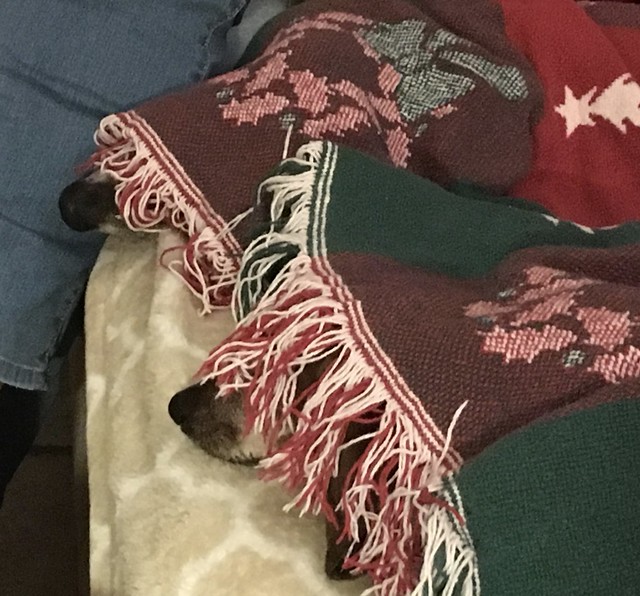 By now you’ve figured out I’m trying to cheer myself up, so work with me here, okay? Happy holidays, dear readers!