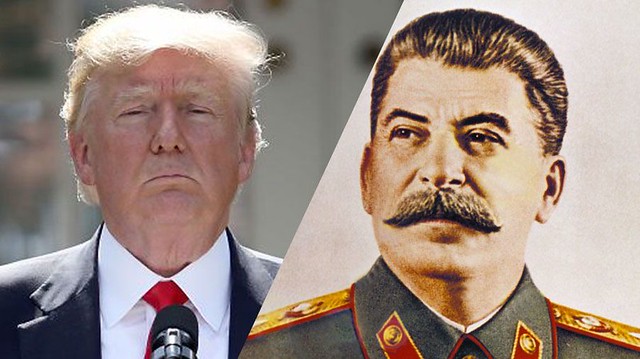 From an article titled State of Terror, written by Keith Gessen and published by The New Yorker on November 6, 2017:

Stalin soon began to receive warnings of an imminent German invasion. Despite the ravages of the Terror, his anti-Nazi spy network was still the best in the world. Hitler issued a top-secret order for Operation Barbarossa, the invasion of the U.S.S.R., in mid-December of 1940. Within two weeks, Stalin had an accurate description of the operation on his desk. In the months to come, as the Germans moved much of their Army and Air Force and logistics staff to the border, he received more and more warnings, and disbelieved them all.

He trusted no one, including his spies. When, in May, 1941—just six weeks before the invasion—Pavel Fitin, the head of N.K.V.D. foreign intelligence, brought him the most credible reports to date that the invasion was on its way, Stalin blew up. “You can send your ‘source’ from the headquarters of German aviation to his fucking mother,” he shouted. “This is not a source but a disinformationist.” The fact that Stalin had executed so many of his previous intelligence chiefs—in the case of military intelligence, the last five—did not encourage his intelligence officials to talk back. As Fitin, who later organized the spy network that infiltrated the Manhattan Project, remarked of Stalin’s blowup, “Despite our deep knowledge and firm intention to defend our point of view on the material received by the intelligence directorate, we were in an agitated state. This was the Leader of the Party and country with unimpeachable authority. And it could happen that something did not please Stalin or he saw an oversight on our part, and any one of us could end up in a very unenviable situation.”

Gessen wrote his article long before this week’s revelation that CIA and DIA officials censor the Presidential Daily Briefing, omitting or soft-pedaling negative intelligence about Russian activities in order not to upset the Man in the High Chair. Still, it’s clear Gessen means for readers to draw parallels between Stalin’s distrust of his own agents and Trump’s constant denigration of the nation’s intelligence agencies, unfailing admiration of Vladimir Putin, and repeated claim that the investigation into Russian meddling in the 2016 presidential campaign and election is a “witch hunt.”

At the moment, I see more Keystone Kops than Stalin in Trump and the band of third-raters he’s surrounded himself with in the White House, but that could change. George W. Bush also rejected intelligence he disagreed with: then as now, to many Americans GWB’s administration seemed more laughably inept than fearsome, but ask Iraqis if they saw anything funny about it.