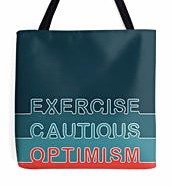 Parents of adult children should be able to relate to this: our 40-year-old daughter Polly left her boyfriend in late June and moved in with us. It’s just until she gets back on her feet, we told ourselves. Since then she’s been employed three times: once for two weeks, once for two days, once for a single day. In between she’s been on her laptop, submitting electronic applications and emailing copies of her resume. We resolved, over the holidays, to lean hard on her to get out and knock on doors—not electronically but physically—and to lower her sights; in short, to find work and start contributing to the household economy.

The bag says “exercise cautious optimism,” and that’s what we’re doing now. Today is Polly’s first day at job number four. Her new gig is keeping the books for a used car dealership near the air base. Full time, decent pay. Apparently this guy’s record-keeping and financial management is a mess, but he’s been in business for years, so we don’t think it’s a fly-by-night deal. Now the question is, can Polly keep this job? We’ve learned not to start popping champagne corks too soon.

As I write she’s walking out the door to drive to work, spiritually wreathed in mental waves of cautious optimism from her mom and dad. It wouldn’t hurt if you, dear readers, kept your fingers crossed for her, too. Thanks!

Here’s another short video, this one a blooper reel from the motorcycle ride my son and I took a week ago, me on my Goldwing, Greg on a rental Harley. Just outside the little mining town of Superior, Arizona, I pulled over so we could swap bikes. Greg got on my bike but couldn’t remember how to start it. I shut his bike off and walked over to show him how to start the Wing. Once Greg was squared away I couldn’t figure out how to get the Harley started, and he had to walk over to talk me through it. Eventually both bikes were running again and Greg took off with me in pursuit, assholes and elbows on the unfamiliar Harley: how do you shift this thing, where’s the brake, why does the windscreen shake like it’s about to fall off? A comedy of errors captured on my Christmas GoPro. 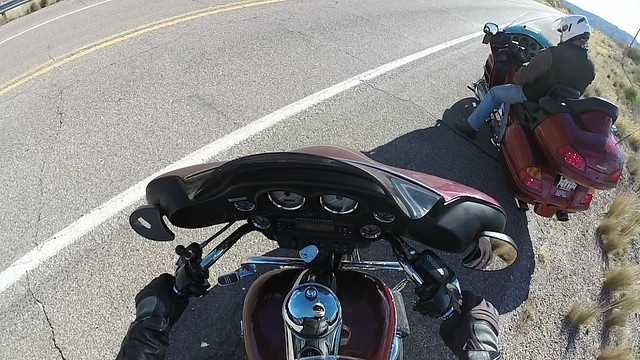 More to come in future posts.

As a fan and supporter of President Obama, I’m pleased to see questions being raised about whether Ted Cruz and Marco Rubio are eligible to be president. Eligibility requirements are set forth in Section 1 of Article Two of the Constitution:

Donna and I are natural-born citizens of the USA. We happened to be living in Germany when our son was born, but there’s never been a question about whether he could be president some day: he too is a natural-born citizen of the USA. Ditto George Romney, born in Mexico to American parents, who ran for president in 1968. Ditto John McCain, who ran in 2008, born to an American military family in Panama. Being born in another country is not the issue, it’s the citizenship of the parents.

Cruz seems iffy to me. He was born in Canada to an American mother and a Cuban father, so there’s room for debate. And I hope there is, because I simply don’t like the guy. Rubio was born in the USA but his parents were Cuban. I always thought, as with US-born babies of undocumented immigrant parents, that if you’re born here you’re automatically an American citizen, so I think Rubio’s case is less shaky than Cruz’s.

I follow a few aviation groups on Facebook and Tumblr, mostly for the historical aircraft photos and videos members post, some of which give me ideas for Air-Minded posts of my own. Last night the owner of one of those groups put out a call for writers, and I responded. If it turns out they want contributors to write for “exposure” rather than cash, I’ll withdraw. After all, I’m already writing for free, and as my writer friends say, you can die of exposure.

So far, no response. But I’m cautiously optimistic.