The H-Bomb of Justice 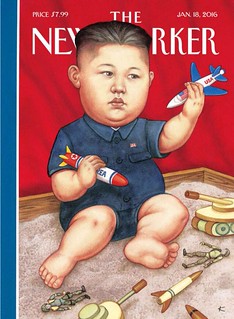 If you know me, you know I obsess over North Korea and the Kim regime. Probably because I spent some time in neighboring South Korea, sitting air defense alert at Osan Air Base and running trail near the DMZ with the Seoul Hash House Harriers. The closer you get to the 38th Parallel, the spookier it gets, and once you’ve been there you can never forget it.

I decided to read what the DPRK is saying about its H-bomb, if indeed it really has one (experts so far say seismic data indicates a partially-successful A-bomb, similar to those they’ve detonated before).

I found the following article on the Korean Central News Agency site. The site is set up in a way that prevents anyone from linking directly to individual articles, so I had to cut & paste what you see below.

It’s not as bellicose as most KCNA articles, and it lays out, in relatively sane language, the Norks’ rationale for wanting an H-bomb. But there are still some amusing and uniquely North Korean turns of phrase, such as “world progressives are shouting hurrah while the hostile forces are making screams.”

The sad part is that even now, translators are busy rewriting this in Persian.

Having an access to H-bomb by its indigenous efforts and technology, the DPRK fully demonstrated to the world the development of its nuclear force on a higher level and proudly joined the advanced ranks of nuclear-weapons states.

Its access to the strongest nuclear deterrent marks a great event in the national history spanning thousands of years.

The world progressives are shouting hurrah while the hostile forces are making screams.

The H-bomb test conducted by the DPRK was a measure for self-defence to thoroughly protect the sovereignty of the country and vital rights of the nation from the daily-growing nuclear threat and blackmail by the hostile forces and reliably guarantee peace on the Korean Peninsula and security of the region.

History proves that powerful nuclear deterrence serves as the strongest treasured sword for frustrating outsiders’ aggression moves and protecting peace and security of the country.

When the U.S. desperately pursued the policy of the Cold War against the former Soviet Union after having access to nuclear weapons through the world’s first test for explosion of A-bomb, the latter could stand up against the former because it had access to nuclear weapons without delay and conducted a H-bomb test in the year after the former carried out H-bomb test, thus putting an end to the era of the U.S. monopoly of nukes.

The then U.S. President Eisenhower in a press interview deplored that the Soviet Union’s access to H-bomb caused new problems in the security of the U.S., reluctantly sending a message representing the U.S. intention not to fight a war with the Soviet Union.

It was a bitter lesson drawn by the situation in the 21st century that a country should possess nuclear weapons without fail to protect its sovereignty and dignity under the present international political order in which a jungle law is in force.

The Saddam Hussein regime in Iraq and the Gaddafi regime in Libya could not escape the fate of destruction after being deprived of their foundations for nuclear development and giving up nuclear programs of their own accord, yielding to the pressure of the U.S. and the West keen on their regime changes.

The U.S. and other imperialist big powers are interfering in the internal affairs of sovereign states and making weak countries their scapegoats through their high-handed military actions.

The U.S. nuclear threat and blackmail against the DPRK have steadily increased since the 1950s.

The U.S. has staged large-scale joint military drills every year. It has worked hard to ignite a nuclear war against the DPRK by amassing its nuclear strike means including nuclear carrier task force and nuclear strategic flying corps in south Korea and the vicinity of the Korean Peninsula.

It is due right of the DPRK to cope with the moves of the U.S., chieftain of aggression, to start a nuclear war against the Korean nation.

High-handed and arbitrary practices can never work on the DPRK.

It is as foolish an act as wishing to see the sky fall to demand the DPRK scrap its nuclear program and halt its development, unless the U.S. rolls back its outrageous hostile policy toward the DPRK and imperialist aggression forces give up their infringement upon sovereignty by use of force in the international arena.

The DPRK is proud of having access to H-bomb of justice.