Class Is as Class Does

A friend, Tony from Texas, asked me about the watches I photographed for yesterday’s post, Expensive Hobby Update.

So, the watches in the case, L to R: the Seiko Pogue from 1974, one of the first automatic chronographs you could buy back then; a new Seiko Recraft casual dress watch I bought two weeks ago because I liked the green dial, a Breitling Chronomat Donna bought me in Hong Kong on our 25th anniversary; the limited edition Seiko Pogue lookalike I got last year for about $250 (scalpers were already flipping them on eBay for triple that by the time I ran down one of the last available examples); a Seiko diver I bought new in 2015 for less than $200. More …

It’s the “more” at the end I want to expand on today.

In 1978, after qualifying in the F-15 Eagle, I thought I’d earned a reward. A fighter pilot ought to have a Corvette, right? And a Rolex. I went to work on the Corvette first. 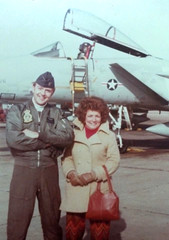 During the last two months of 1978, Donna and our kids stayed with my father in Missouri while I finished an advanced stage of F-15 training at Langley AFB, Virginia. The program was intense and I didn’t have a minute of spare time, so Donna was in charge of finding and buying a Vette for us to ship to the Netherlands, where we were headed once I finished at Langley.

She wound up getting us a six-month-old Datsun 280Z. A guy had bought it for his wife, who wouldn’t drive it because it had a manual transmission and no power steering. It had less than a thousand miles on it — essentially a brand-new car. Dad and his fiancee Lois drove it to Virginia and handed it over to me (the car was just the excuse for the trip: what Dad really wanted was for me to meet Lois and give them my blessing to marry — the inset photo is when I first met her, on the Langley AFB flight line in December 1978). After they flew back to Missouri, my blessing upon their heads, I drove the Z to the nearest port and put it on a boat to Rotterdam. Donna and I drove that lovely car all over Europe, later taking it with us to postings in Alaska, Virginia, Florida, and Honolulu (finally selling it to an airman at Hickam Field in 1994). No, it wasn’t a Vette. It was better.

The Rolex didn’t come along until November 1990, and when it did it wasn’t a Rolex. We were at Kadena AB in Okinawa then, me back in the cockpit after a staff tour in Florida. Some Marine Corps officers’ wives organized a trip to Bangkok, Singapore, and Hong Kong, and since it was coming up on our 25th anniversary we decided to join them.

HK was the place to buy Swiss watches, we’d been told, so I saved up beforehand, planning to buy a Rolex while we were there. On the recommendation of American and British friends, I made an appointment with a watch dealer in a third-floor shop at the Royal Navy’s China Fleet Club. The cheapest Rolex he had was six grand, way more than I’d imagined and far out of my price range. But he knew I was a fighter pilot, looking for something similar to the Seiko chronograph on my wrist, and when he showed me the Breitling you see in the middle of the photo at the top, I forgot all about the Rolex. The fact that I could actually (barely) afford the Breitling sealed the deal, and it remains to this day my one and only Swiss watch.

I’m uncomfortable showing off my watches, because I think it’s low-class to talk about, let alone obsess over, one’s possessions, but here I am doing just that. I guess if I’m going to have a vice it’s not the worst one to have, but still. Anyway, I just want to say, once again, that as fine a watch as that Breitling is, the modestly-priced Seikos on either side of it are every bit as good. And if Donna and I could go back in time to 1978, we’d skip the Corvette and buy that 280Z all over again.

I relayed these stories to Tony, closing with the observation that Donna has run out of patience with me and my new-found wristwatch hobby, and will not countenance the purchase of additional timepieces. Which is true, and I’m okay with that. Anyway, Tony says I should share these stories with all my friends, so here you are. Happy Cinco de Mayo*, everyone!

*Not to beg the question, but does Mexico have a wristwatch industry? Well, Mexico’s economy being the 14th or 15th largest in the world,  why wouldn’t it? Prices seem reasonable, too. Hmmm …

One thought on “Class Is as Class Does”