The Yankee Air Pirate Seiko is back from the watch repair shop.

Donna bought it for me at the Vance AFB BX in 1974 when I started pilot training. I wore it daily during a 24-year flying career and for several years afterward, until the day 20 years ago I forgot to take it off before getting in the pool and water got inside. It stopped running, the crown and push buttons locked up, and over time rust spots appeared on the dial. A local watch repair shop assessed the damage and said it wasn’t worth what it would cost to repair it, so I put it in a dresser drawer and tried to forget it.

I didn’t forget it. Last year Seiko came out with a limited edition tribute watch based on the 1970s original. In the process of tracking one down (they were surprisingly hard to get), I learned that the originals, commonly called Seiko Pogues after Colonel Bill Pogue, the NASA astronaut who wore one on a Skylab mission in 1973, are now collectors’ items.

In other words, getting the new Seiko made me want to get the old one fixed all the more, and damn the expense.

Earlier this year I went online looking for authorized Seiko repair shops, eventually entrusting my watch to Total Watch Repair in Encino, California. It came back earlier today, repaired and refurbished, looking like new and working perfectly. I don’t mind giving them a plug … they do great work, and when it comes time to have my other watches serviced, TWR’s getting my business.

Now, at last, my collection of automatic self-winding wristwatches is complete (meaning it fills all five slots in the display case* I bought for them, obsessive watch nerd that I’ve become). 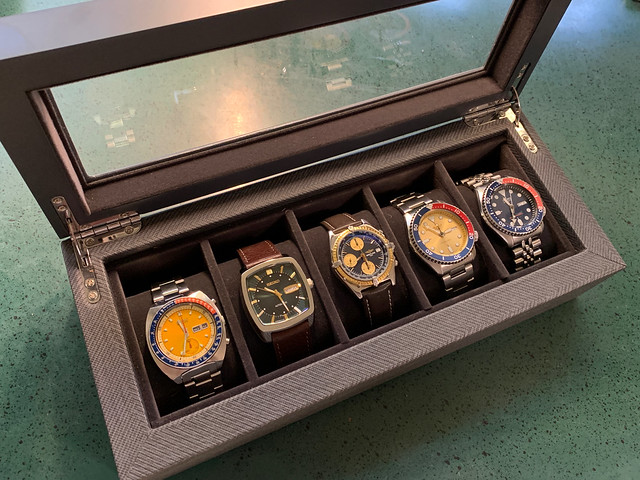 *With one exception (the one in the middle) the watches in the box are modestly-priced Seikos. The Pogue, when new, went for less than $100 (Col. Pogue paid $71.50 for his in 1972). My other Seikos, purchased new during the past two years, ran from $150 to $250. The Pogue is on the left; the lookalike tribute watch is next to last on the right. Mechanical Seikos IMO rival Swiss watches in quality and accuracy and are a hell of a deal for the price.