I have some aviation and automotive updates for you today. 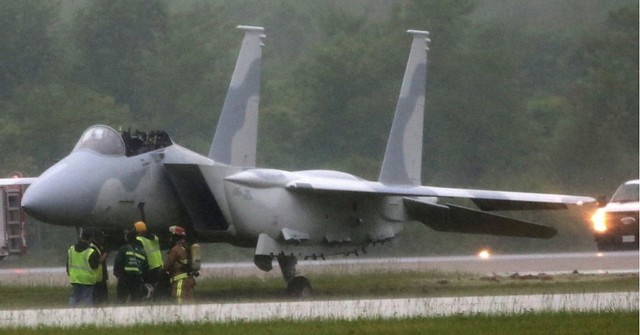 Interestingly, the pilots punched out on the ground after landing and departing the runway. Both are okay, but no information has been released as to why they ejected. The F-15QA, upon which the USAF’s new F-15EX is based, is manufactured by Boeing at its St. Louis Lambert International Airport factory, while USAF instructors train Qatari aircrews in their new aircraft across the river at MidAmerica St. Louis Airport in Illinois.

The first aircraft I flew equipped with a zero/zero ejection seat was the F-15 Eagle (zero/zero translates to zero altitude/zero speed, meaning a seat that will safely eject its occupant from a stationary aircraft on the ground). Prior to the F-15, I flew T-37 and T-38 trainers, neither of which had a zero/zero seat. The T-37’s ejection seat was fairly primitive … the minimum safe ejection altitude and speed was 200 feet and l20 knots, and you could expect just one swing in the chute before hitting the ground. The T-38’s seat was more sophisticated … you could eject at zero altitude, but only if you were rolling down the runway at 100 knots or more and didn’t weigh much to begin with.

I’m not going to speculate on why the pilots in that Qatari Eagle decided to eject on the ground after landing. Glad they got out okay.

Update (5/20/21): Still no word on why the crew ejected, but this followup in The Aviationist offers some interesting details and photos. Both pilots were active duty U.S. military members, one Air Force, one Navy. The airframe appears to be undamaged, but there is undetermined damage to the glass cockpits from the ejection seat rockets. The aircraft has been recovered, which I take to mean towed from the grass area by the runway to a different location.

Rachel Maddow devoted last night’s A block to Ford’s new electric F-150 pickup truck and its chief engineer, Linda Zhang (the video links cuts off before the part about Linda Zhang; you can read a written transcript here). It’s worth watching. We haven’t had new car fever in decades; after watching the segment Donna turned to me and said, “This is going to be our next car,” and I enthusiastically agreed. The official unveiling is scheduled for this evening … I can’t wait to learn more about its range and capabilities.

I’ve had my eye on Teslas over the past few years, but the more I know about them the more questions I have about build quality and customer support. Neither should be an issue with Ford, and I’m glad to see the big automakers finally getting their own electric vehicles to market. As Rachel said last night, “… if what Ford has done is build a Ford F-150 that is all electric, that is better than Ford F-150s that are powered by gas or diesel, this will change the game. This will change the climate literally. This will change America’s relationship to the internal combustion engine faster than anything else could. That one vehicle would make that big a difference.” 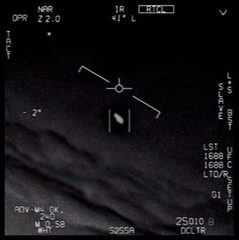 Here’s a transcript of last weekend’s 60 Minutes segment on UFOs, titled UFOs Regularly Spotted in Restricted U.S. Airspace, Report on the Phenomena Due Next Month. Before you get too excited, read Tyler Rogoway’s analysis of it at The War Zone defense blog: Adversary Drones Are Spying on the U.S. and the Pentagon Acts Like They’re UFOs.

Last year, after The War Zone published detailed incident reports released by the Navy, I wrote a post about encounters with unidentified flying objects in military airspace off the Virginia coast. The objects described in those reports were generally small, either floating the the air or moving slowly, and were observed at medium to low altitudes. 60 Minutes worked hard to find a couple of pilots willing to report encounters with faster objects that moved strangely, but in general the incidents on which they based last weekend’s segment were the same ones The War Zone and I studied last year, describing unidentified objects that might well be drones or balloons, possibly placed in military flying areas for the purpose of collecting electronic intel on U.S. military aircraft radar and electronic countermeasures capabilities, something adversary nations have always done (and to which I’ve had a front-row seat).

Look, we all want to believe space aliens have found our planet and are visiting us on the regular, but this stuff? It’s not extra-terrestrial. Not by a long shot.

A while back I described a humorous Twitter encounter with Chuck Yeager’s widow Victoria, who posts to social media under Chuck’s name, correcting anyone she thinks has attacked his reputation. She’s still at it. Two days ago, aviation reporters and journalists observed the 68th anniversary of the first supersonic flight piloted by a woman. This Twitter post by Ron Eisele was typical: 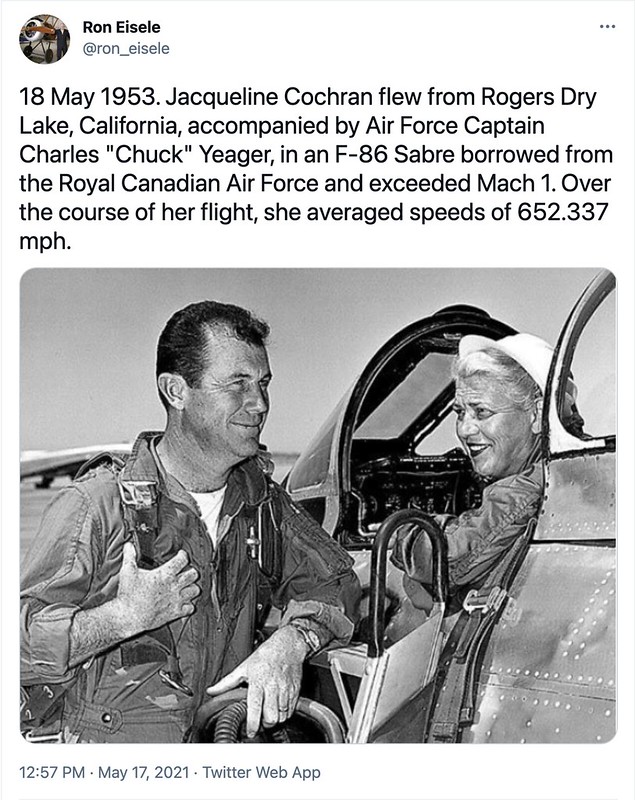 Accurate, to the point, and deferential to the Man Who Broke the Sound Barrier™, Chuck Yeager. Or so you’d think. Having had a personal encounter with Victoria Yeager, I sent Mr. Eislele a quick heads-up: “A certain someone would say you aren’t giving enough credit to Chuck Yeager.”

Sure enough, this post popped up a few hours later:

I’m surprised she didn’t use the same photo, since Chuck’s in it … maybe because Jackie’s in it too?

Last but not least, a hard-to-find photo of the Eagle Eye, the rifle scope we mounted to the F-15 Eagle’s HUD bracket for visual identification of target aircraft too far away to ID with eyes alone. 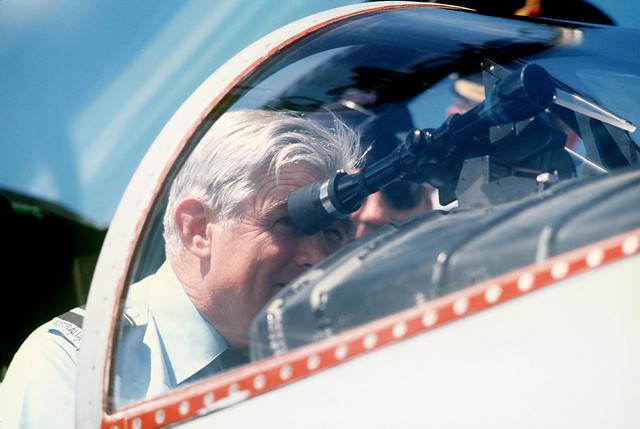 The Eagle Eye was a simple, homegrown way to get an early visual ID on targets. At the closure speeds of jet air combat, by the time the black dot in your canopy became a MiG-21, it’d be too late to fire a missile at it, and since the combat ROE (rules of engagement) required a positive visual ID before you could shoot, you’d be forced into a turning dogfight. The whole point of the Eagle’s powerful radar and long-range missiles was to engage the enemy BVR (beyond visual range), but the ROE didn’t allow that, taking away much of the Eagle’s advantage. The Eagle Eye wasn’t good enough for BVR target identification, but it gave you enough of an edge to get a missile off coming into the fight, and we loved it.

The way it worked, you’d lock up a target between 10 and 20 miles, pull to put it on the nose, then take a quick look through the scope. It worked. Surprisingly well. And the best part? Fighter pilots were the ones who came up with the idea and put it into practice using unit funds, not the USAF’s acquisition and budgeting system. Bottom up, not top down.

Today, electronic systems help identify targets at long range. I have no idea how accurate those systems are, or whether today’s ROE allows engagement beyond visual range. I flew with the first generation of electronic ID systems, and they were shit. If those systems have evolved to the point where they’re accurate enough for BVR engagements (and the ROE has caught up with those capabilities), great … but somehow I doubt things have changed that much.