Friday night was drama night at our house. Via YouTube* on our smart TV, we watched our grandson Quentin play Colonel Mustard in his high school’s production of Clue.

We thought at first it was a live performance. Partway through, for comic effect, they sped up the motion of players crossing the set, and we realized it was taped. Our son Gregory, Quentin’s father, was on speakerphone during parts of the play. He explained that the play had been recorded an hour earlier, and that as we watched the cast was actually celebrating at a post-performance party.

I don’t think they had a live audience. Thanks to the pandemic, Quentin’s own parents were watching from home, as were all the other parents, grandparents, friends, and classmates. Coronavirus intruded in another way: the players had to wear masks. As you can see in one of the fuzzy photos below, some masks were transparent, some were not. Some had those circular breathing valves, and when I first saw the characters wearing them I thought they were smoking prop pipes. Transparent, opaque, and/or valved, the masks muffled the actors. Not our grandson, though. His lines came through loud and clear. He’s the gentleman on the left in the second photo.

Quentin’s high school graduation ceremony is the second of June. We’re driving up to be there in person. He’ll start attending classes at Dixie State University in St. George, Utah, in August. My, how time flies!

*By the way, if you’re going to fire up YouTube on your smart TV in front of others, whether to watch a family member perform in a play or for another reason, you may want to clear your history first, lest you and your guests be forced to squirm in embarrassed silence as you try to make a list of recent search terms like “Buffy Summers naked/Dr. Pimple Popper squeezes a big one/police car chase compilation” vanish from a 65-inch screen. Just sayin’.

I gave the Goldwing a sponge bath Sunday. Since it wasn’t very dirty to begin with, the results were almost as good as if I’d taken it to the neighborhood pressure wash. As is my wont, I wrote about it on Facebook and Twitter, where I described it as a “whore bath.” A few people asked me to explain what I meant by that. “Pits, tits, and naughty bits” is the description I’ve always heard, and that should be explanation enough. In the current climate, I’m surprised no one got after me for dissing sex workers, or using a phrase that’s applied only to women (though I don’t know why it wouldn’t apply to male sex workers as well … or anyone of any gender who’s ever skipped a shower and just wiped up instead because they’re in a rush). 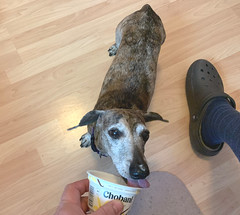 Mister B will accompany us on our upcoming trip to Las Vegas. He’s been a great companion throughout the quarantine, a very very good boy in all respects. I shared a bit of my breakfast with him this morning, as you can see by the yogurt on the tip of his nose.

We’re taking him to the animal hospital tomorrow to see if he’s finally kicked valley fever. If the titer test says it’s still there we’ll change medications to see if that’ll get rid of it. Not that he’s suffering … the med he’s on now, fluconazole, keeps him symptom-free, and the valley fever only shows up in his blood when he gets these periodic tests.

For years now, I’ve advocated taking military commanders out of the sexual crime investigation/punishment loop. This is from a post I wrote in March 2014:

Military leadership has promised, over and over again, to get tough on sexual assault. Military leadership has failed, over and over again, to keep that promise. Commanders routinely sabotage sexual assault investigations and prosecutions to protect favored male officers. The military has demonstrated that it is unwilling to protect victims of rape and assault, unwilling to punish perpetrators. Enough is enough; it’s time for a change.

This week General Milley, chairman of the Joint Chiefs of Staff, dropped his opposition to a proposal to take decisions on sexual assault prosecution out of the hands of commanders.

This is huge. Maybe something’s finally going to happen.

The military should be leading the way in going after sexual assault, as it did with racial integration in the 1950s. I’m ashamed that military leaders have, up to now, chosen to protect a broken status quo. As far as I’m concerned, at least when it comes to sexual assault, military leaders forfeited the moral authority to invoke the sacredness of the chain of command long ago.