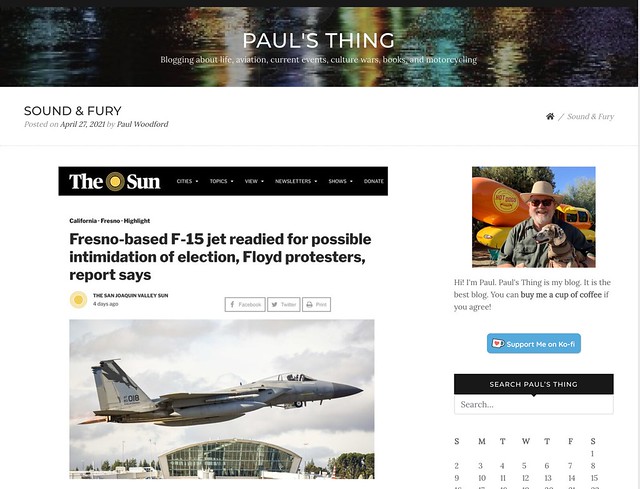 In my earlier post, I said the idea of using military jets against civilians, flying low and fast over crowds of protesters to confuse and disperse them, left a bad taste in my mouth, and that if I’d been ordered to fly such a mission I hoped I’d have had to fortitude to refuse it. It appears I’m not the only one to feel that way. 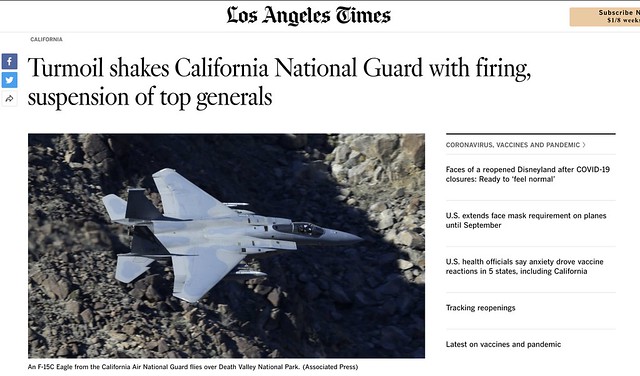 The fallout, detailed in this story from the LA Times, has been fast & furious. The article, unfortunately, is paywalled, but here are the highlights:

Turmoil has gripped the leadership ranks of the California National Guard, with the firing of the general who commanded its air branch, the suspension of a second key general, and new limits placed by Gov. Gavin Newsom on the organization’s use of fighter jets for civilian missions.

Guard sources told The Times that last year’s order to put the F-15C on an alert status didn’t spell out the mission but, given the aircraft’s limitations, they understood it to mean the plane could be deployed to terrify and disperse protesters by flying low over them at window-rattling speeds, with its afterburners streaming columns of flames. Fighter jets have been used occasionally in that manner in combat zones in Iraq and Afghanistan, they said.

The sources said the directives from Guard headquarters made their way down orally or in text messages, rather than in formal written orders, which was unusual and heightened their concerns that the jet would be used inappropriately.

… Col. Jeremiah Cruz, who commanded the 144th Wing until January, said: “At no time during my tenure as wing commander, vice wing commander, and operations group commander was I ever tasked to utilize an F-15C at the 144FW to respond to a civil unrest event nor has the idea ever been discussed with me as an option.”

An earlier email reviewed by The Times shows that Cruz had referenced concerns over the jet’s use to several officers three days before the Nov. 3 election. “There is no expectation that the F-15C will be used in any way in support of civil unrest,” he wrote, instructing the recipients to keep him apprised of “any requests or upcoming requests” from Guard headquarters in Sacramento.

Yeah, there’s that little matter of the Posse Comitatus Act. Not to mention common sense.

If you can get around the paywall (hint: open the link in an incognito window), the article contains some juicy details of backbiting at the highest levels of the California National Guard. Well worth a read.

Boys and their toys. Sometimes the grownups have to take them away.