Wheels on the Wagon Go Round & Round

This week we’re taking our houseguests, Donna’s sister Georgie and her husband Don, on a four-day drive to the Grand Canyon, Flagstaff, and Sedona, with side stops in Cottonwood and Jerome.

Honestly, I look forward to the getaway as much for an escape from fix-up projects as for the sights. Don is handy where I am not. He’s happy when he’s doing things, and the things he’s been doing are things that need to be done, but I can’t just sit around and watch, so I’ve been hopping when I’d just as soon be lazing. By “hopping,” I mean driving Don to Ace Hardware and Harbor Freight. I try to be nowhere to be found while he does the actual work.

I’ve been meaning to fix that old wagon for years. I’ve been meaning to fill in that triangle with rocks for years. I was perfectly content intending, not doing. Thanks to Don, the doing got done. Plus: new LED overhead lighting in the garage; sticky drawers in the bathroom sticking no more; the old wheelbarrow with its flat tire and cracked wooden handles now good as new. Thank you, brother in law, but you’ve raised the bar and I’ll suffer for it when you leave! 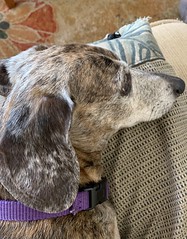 A bad thing happened. Don and I took some patio junk to the county recycle center. Mister B wanted to come, so we took him. When we got there I put him in the pickup bed so he could watch while we unloaded it. I turned my back for a second and he jumped off the tailgate to the pavement below, a long drop. He landed on his chin, hard. There was blood. I think he bit his tongue, but his teeth seem okay. He recovered quickly and seems his old self, but damn, I feel like the worst dog dad in the world. No … I am the worst dog dad in the world.

Mister B will stay with our friend Millie and her three dachshunds while we’re road tripping with our guests. He’s boarded there before and always has a good time, but naturally he’d much rather go with us on a long car trip. We’ll make it up to him when we take him along to visit our kids in Las Vegas next month. He’s an avid traveler and a good one. If I still traveled by air (something I hope never to do again in the time I have left), I’d buy one of those bogus service dog certificates so he could come along.

You may have heard that Arizona Governor Ducey, like some of his red state counterparts, declared mask mandates illegal, but most businesses here (bars and restaurants excepted) still require them. Enforcement isn’t consistent — our local Safeway quit enforcing its mask policy months ago and I notice more and more customers not wearing them, but surprisingly, the hardware stores Don and I have been frequenting take a hard line, even though their customers can be presumed to lean right. Don forgot his mask when we went to Harbor Freight yesterday and they made him buy one. Everyone inside was masked (and properly so, pulled up over their noses), and no one was acting out or making an issue of it. It seems the Ayn Rand libertarians were right all along: if you drown government in a bathtub, the invisible hand of the market will step in to maintain order and public safety (insert sarcasm emoji here).

Looking for something on TV we and our guests could enjoy together, we put on the first two episodes of The Crown on Netflix. With the death of Prince Philip, it was a timely selection. The first season, especially, was kind to Elizabeth and Philip (while at the same time showing his racist side). It was a rewatch for us, a first viewing for Georgie and Don. I must say Donna and I were more impressed with the series the second time around. When TV is good, it’s really good.

While waiting for new seasons of favorite streaming TV series to drop, I’ve been going back through The Expanse and Buffy. As with last night’s rewatch of The Crown, I see and appreciate so much more on a second or third viewing. I’m not so much into re-reading books, but am hitting The Expanse in print as well as on TV, giving the novels a second look while I wait for the ninth and final one to be published (“Leviathan Falls,” due in November). The books more than hold up on a second read. As do Philip Pullman’s His Dark Materials novels; as do Patrick O’Brian’s Aubrey/Maturin novels. Okay, forget what I said about being not so much into re-reading books!

Blogging may be on hiatus for a few days, but I’ll check in on social media. Stay safe, and keep wearing your masks in public, okay?