This blows my military mind: 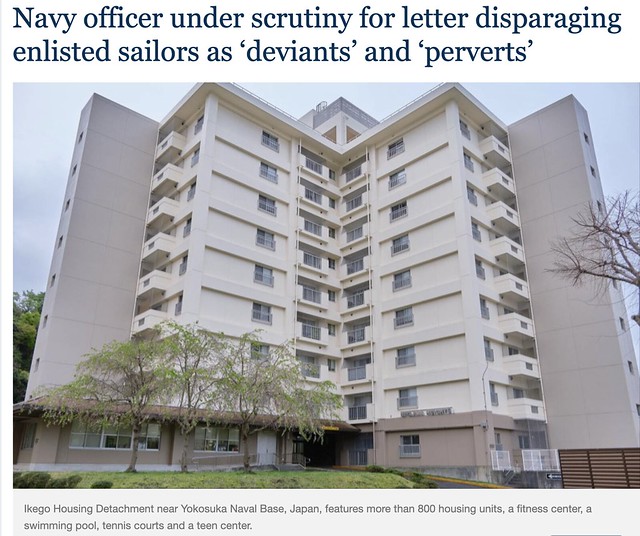 The gist of the story is that a U.S. Navy officer and his family were assigned quarters in enlisted family housing at a base in Japan. The officer protested in a letter to base housing authorities, and somehow (oops!) it went public. The authorities, rather than investigate the complaint, have turned their attention to the complainant. Unsurprisingly, the same authorities leaked his identity to Stars & Stripes, the newspaper of U.S. military communities abroad, publicly shaming him without a trial, a particularly nasty form of retribution I remember well from earlier times at an Air Force base on Okinawa.

The letter, allegedly authored by Lt. Nathanael Allison of Naval Hospital Yokosuka, states that living in the Ikego Housing Detachment in an apartment building for enlisted families is “unacceptable.” The message, filled with spelling and grammatical errors, condemns enlisted sailors as “perverts” and accuses them of egregious behavior such as rape, involvement in drug cartels, and attacking each other with hatchets.

“There are often drunk and often hostile sailors hanging around enlisted housing,” the letter states. “Housing with enlisted greatly increases the risk to my family. I have a good-looking family, a wife and two daughters ages 3 and 4. They are prime targets to be victims for these deviant enlisted activities.”

The letter states that officers are “more respectable” than enlisted members and that Allison’s children should “only be friends with officers’ children” and his wife “only friends with officer wives.” He also expressed concern that his officer colleagues would not want to visit him in enlisted housing.

The story hit Twitter a couple of days ago, drawing outraged commentary from all quarters, military and civilian. For sure, it is not done for officers to disparage enlisted members (and vice-versa), at least not out loud or in print. I have to say, though, that bit about sailors attacking each other with hatchets is strikingly specific, and I’d love to hear the rest of that story!

While everyone’s down on Lt. Allison, I’m boggled that the Navy housed an officer and his family in enlisted housing, given the military’s position on fraternization. Today, we mostly think of fraternization in terms of sexual affairs between officers and enlisted members, but it applies to all facets of military life, on- and off-duty. Military base housing has always been segregated, with enlisted housing in one section and officer housing in another. Even within those sections, there are separate mini-neighborhoods for junior, NCO, and senior NCO enlisted families, and for company grade, field grade, and flag rank officer families.

As for the offensive remark that the lieutenant’s wife should “only [be] friends with officer wives,” permit me to share a story. I was, for a few months in the 1980s, one of two F-15 pilots assigned to Elmendorf AFB in Alaska. Our job was to prepare the F-4 squadron there for transition to the F-15. My colleague, Larry, was a lieutenant colonel, sent there to take command of the squadron once the conversion was complete. Larry and I were friends from a prior F-15 assignment in the Netherlands, where he and his first wife had divorced. Newly single in Alaska, he started dating Leila, a young woman who met him at the Elmendorf officers’ club. Leila was an active duty junior airman, and when the wing commander found out about the relationship, he called Larry on the carpet. Fraternization of that kind was and is a no-no, punishable under the UCMJ, even though Larry and Leila weren’t in the same chain of command.

Larry solved the problem by marrying Leila. Donna and I hosted their wedding reception at our quarters in Elmendorf officers’ housing, and at Leila’s request I wrote a letter to the Air Force asking the service to release her before her term of enlistment was over. My central argument was that Leila, as the wife of a squadron commander, would have to work closely with and lead the spouses of other officers in the squadron. Were she forced to remain on active duty as an enlisted airman, she wouldn’t have social authority over those officers’ spouses, nor their respect. I didn’t make this argument up … there were examples of similar pleas from other officer/enlisted couples floating around, and I basically copied what they’d written in their letters. A month later, the Air Force released Leila from her commitment, and she became a civilian. Larry and Leila went on to have a long and successful life in the Air Force.

Gotta say, though, attacking each other with hatchets? Wow. As a fighter pilot, I’ve seen officers get up to some shit, but nothing on that order. Color me impressed!

Update (4/10/21): Navy Disciplines Officer for Calling Enlisted Sailors Hatchet-Wielding Perverts. As predicted, the Navy did not investigate the complaint. In time-honored tradition, they punished the complainant. Well, at least Lieutenant Allison now knows what it’s like for female sailors who report sexual assaults.

From the linked article:

“The command’s investigation into this matter has concluded and been adjudicated, with appropriate disciplinary measures taken,” Kowitz said. “The command cannot release or discuss the details of administrative actions for misconduct due to privacy regulations.”

Privacy, eh? This from the same command that leaked the lieutenant’s letter, along with the names of him and his family, to the Pacific Stars & Stripes?

Speaking of housing, here’s a glimpse into our quarters, where we’re fraternizing with Donna’s sister Georgie and her husband Don. If you look closely, you can see the two boxes of Costco seafood paella we reheated for last night’s dinner on the patio.

I posted this photo to all the usual social media hangouts, with this caption: “Two months ago this would have been a super-spreader event. Thanks to Handsome Old Joe Biden & his vaccination program, it’s just a family gathering (our first since Feb 2020).”

My post drew an admonition from a friend, who said “Easy does it, Paul. Vaccines are not 100% effective.” Unless I’m reading the news wrong, COVID vaccines are at least as effective as other vaccines and maybe more so, not only preventing fully immunized people from getting the virus but preventing them from carrying it and passing it on to others, and that per CDC guidelines, we can “visit inside a home or private setting without a mask with other fully vaccinated people of any age,” which applies to every person in the photo except Polly, who hasn’t had her second Pfizer shot yet but who is tested every week at the Amazon warehouse where she works.

When it comes to resuming visits with immunized family members, I’m more than comfortable with the odds. You can be certain, though, that we’ll continue wearing masks in public. I worry that if the vaccinated quit masking up in public, the numbers of people lying about being vaccinated in order to go maskless will skyrocket. It’s already happening. Stay safe, my friends!