Well, another year shot to hell. Once again I’ve caught up with Donna, and for the next six months she can’t call herself a cradle-robbing older woman. We’re both 74 now, which sounds old but doesn’t yet feel so (we still think of ourselves as being in our high-40s, mid-50s tops).

Seriously now, just for a minute … I shared my big day on Facebook with some forgotten Halloween-born children, men, and women. Victims of Hitler’s death camps, memorialized on the Auschwitz Memorial Twitter account, some were Jews, some were political prisoners or gays, one was a Roma child. Natalia Wyplach’s entry for some reason affected me more than the others, so I’ll share it here: 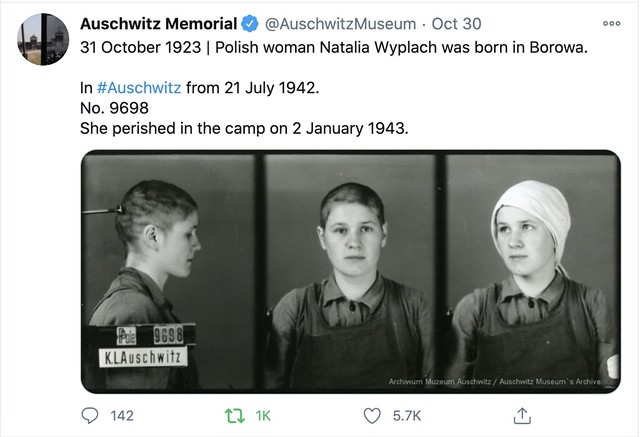 There’s no visible patch, so I don’t know if she was a Jew, a Gypsy, or a political. She was just 19 when she died in the camp. Putting faces with names makes all the difference. These were people like us. Like me. Like you.

Remember them. And for god’s sake, vote!

My birthday gifts included a side table with storage to go by my reading chair, cutting down on the clutter. Not in the photo, a new LED floor lamp and a caddy for the remote controls. The lamp came with a remote, bringing us up to six or seven. We had the remotes laying loose in a little basket, but invariably the one we wanted would be under the others, leading to unpredictable results from random button activations. Now we can pluck the right one out of its own fussy little slot. If you’re thinking the idea for the caddy was mine and not Donna’s, you’d be right. Type A much? I’ll own it. Our friend Mary Anne gave me a letter opener, allowing me to retire the steak knife I’d been using. The kids sent an Amazon gift card, which I’ll use wisely, probably for books to put on the new side table and read under the new lamp. 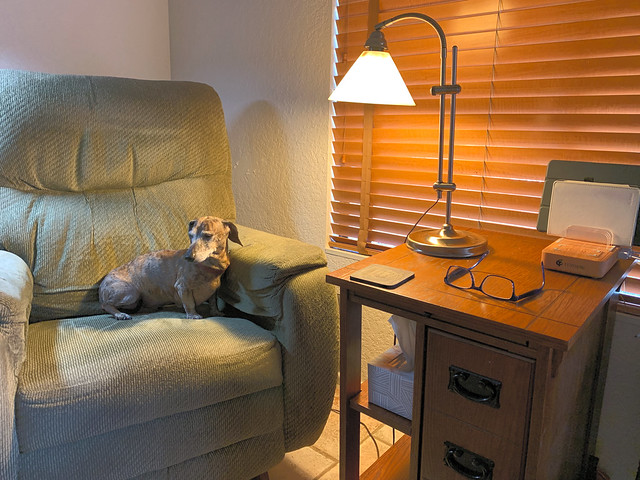 Mary Anne came over to visit Halloween night. She brought salad; I grilled steaks and Donna made a birthday carrot cake. We watched the opening episode of the new season of The Mandalorian, the one with Timothy Olyphant playing the Star Wars version of Raylan Givens (great fun), followed by back-to-back episodes of the real thing, Justified (ditto and then some).

Our approach to pandemic trick-or-treating was individual witch-finger goodie bags on a serve-yourself table by the front door. Donna put some effort into making those scary little bags. Some neighborhood parents decided to keep their kids home this year, but from the safety of our family room we saw a few wee ghouls and goblins warily approach the table and then scamper away with their treats.

My self-interest is obvious and I won’t deny it, but I’ve always thought Halloween should be a national holiday — Americans celebrate it like one, after all. In the spirit of compromise, in case the next president and senate majority leader are reading, I’ll happily give up the idea if we would instead make Election Day a national holiday, so that people would have less of an excuse to not vote!

The big news from Halloween 2020 is that our daughter Polly finally has her own apartment! She’s been living with us the past three years, but her job at Amazon is going well and she finally saved up enough money to pay the deposit and first and last month’s rent on a place, and yesterday I helped her and a work friend, Fernando, move her furniture out of storage and into her apartment. Living with us, she’s been using our furniture; her own stuff has been in storage all this time. It’s going to take her a few days to totally clear out, but at least the process has begun, and soon we’ll have our guest bedroom and bath back … not that we expect guests until the pandemic is over or there’s at least a vaccine. 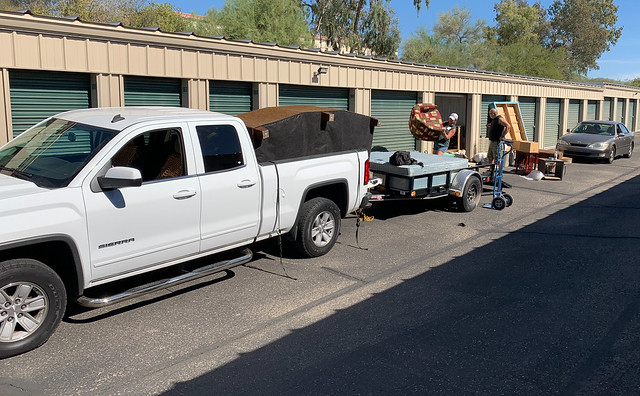 It was a great day on all counts. If I don’t check in again before then, I’ll see you on the other side of Election Day!