They did it, but I’m not gonna doom & gloom over it. You never know how things are going to turn out. The Supreme Court may now have a 6-to-3 conservative supermajority, but for how long? Conceivably, a few deep breaths may have just done Clarence Thomas in, and who knows whom else he could infect before he starts showing symptoms? There’s always hope, however slim. 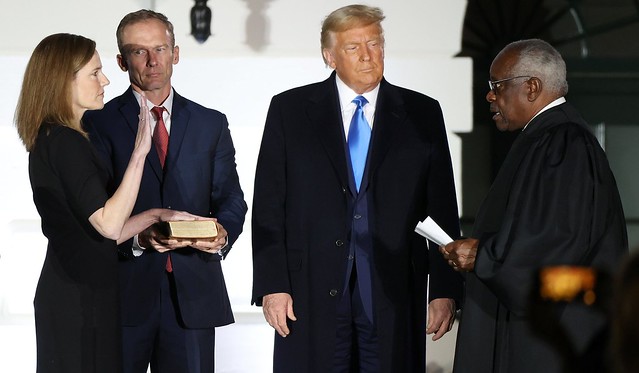 One hope I’m not going to get too invested in is that a Democratic majority in the Senate will add justices to the Supreme Court to return some balance to it. Even if we take the Senate, our majority is likely to be a small one, and as long as there are Democratic senators willing to vote against the party (and there always are), it won’t pass. Even if it does pass, Biden, should he be president, probably won’t support it.

As to next week’s election, can anyone say who’s going to win? Or say what Trump will do should Biden win, or how the Supreme Court will rule should a contested result come before it? I’m on the edge of my seat, just like you. You did vote, right?

Trump is the kidney stone in our political life. Passing it promises to be an ugly, painful experience.

Trump wants to purge the civil service of “disloyal” employees. Suppose Trump loses (and accepts the loss). Will he try to do it anyway between now and January? It’s something I’ve been worried about for a while now, and his recent executive order, granting himself the ability to conduct just such a purge, has reawakened my concern. Here’s some of what I said on this blog in March 2018:

Given what we know of Trump’s obsession with loyalty, it should be clear his real goal is to purge the civil service of “disloyal” federal employees. I’m not just talking about face cards, the agency heads he keeps firing and replacing in search of more submissive and compliant ones; I’m talking about the ranks of SES (senior executive service) and top-level GS (general schedule) employees, maybe even farther down the career ladder than that.

I have a friend in the foreign service, fairly senior in his career track and certainly in the upper- to top-level GS ranks. I worry for him. I’m pretty sure I know where his heart is, and it’s not with the current administration. I hope he’s been careful in what he’s said in the open and on social media, because I’m willing to bet MAGAts (Make America Great Again types) in every federal agency — State, the VA, HUD, Energy, Interior, you name it — are taking note of co-workers’ loyalties and political beliefs and passing lists of names up the line. You know it’s true.

Well, buckle up. We’re in for a bumpy ride, no matter how things turn out.