A friend and I were recently talking about how we came to computers. I didn’t want anything to do with personal computers when they started coming into use, and remember the stupid and condescending thing I said when my fighter squadron in Alaska first installed a desktop computer and printer in the pilot lounge for us to use: “That’s what 702s are for.” Which was Air Force speak for admin troops. 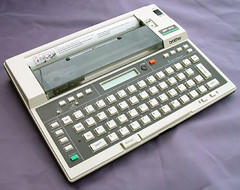 That was in 1983. Within a year my father, which whom I exchanged long typewritten letters at least twice a month, started using one of the early word processing electric typewriters. He loved it and talked me into getting one too. Those devices introduced a lot of people to computer functions we’d later come to take for granted: typing documents into memory and editing them before printing, scrolling from paragraph to paragraph in a small text window above the keys. They had built-in spell checkers, and — first time I’d ever heard of such a thing — a cut & paste function which allowed you to move sentences and even entire paragraphs around. I was instantly hooked. 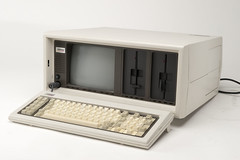 In 1985 the USAF sent me to Armed Forces Staff College in Norfolk, Virginia. Every officer in my seminar group was issued a portable (“luggable” was the word I remember we used) Compaq computer to carry back and forth between the classroom and our quarters. The object was to introduce new field grade officers to personal computers. You couldn’t not use it: we had to compose and write our graduation thesis on the Compaq. I remember how heavy it was and how its sharp edges would bruise my legs when I carried it by its handle. It had two 5″ floppy drives. One was for the word processing program disk (an early version of WordStar); the other was for the black disk on which we were to write and save the thesis and bibliography. As primitive as it was, it was a quantum leap from the electric typewriter/word processor I was still using for personal correspondence, even if I did have to lug it across the quad to the schoolhouse in order to connect it to a printer.

It would be another ten years before most of us learned about email and the internet. On a list of momentous developments in my lifetime, those two things will certainly place near the top.

I owe you an update on our dachshund, Mister B. He came home from the animal hospital groggy and gurgling with intravenous fluids, antibiotics, and anti-inflammatories, but has since transitioned to oral meds. His cough has come back, but it’s not as persistent as before and is getting steadily better, along with his breathing. The fever is gone. I’m concerned that he seems to get food caught in his throat, but he perks up at breakfast and dinner time and is back on his regular food again. It’s an agonizingly slow recovery, but we’re seeing small changes for the better. It’s up to Mister B now because we can’t afford another hospitalization. There are several days’ worth of oral meds still to administer, mostly antibiotics (whoever invented pill pockets deserves a Nobel). Your continued healing thoughts and wishes are welcomed!

Donna’s been working on a custom shirt pocket logo for a client. He came over yesterday afternoon to look at and approve a sample sew-out. With his partner and dog. They wound up staying for two hours. It wasn’t just a business call: we know the couple socially but haven’t seen them in two or three years.

We don’t think twice about masking up when we’re out shopping and mingling with strangers. With friends, whether they visit us or we them, masks in the home just seem rude. We did what we could to keep a polite six feet between us without looking like we were forcing the issue. Today a neighbor dropped by to help us get our new cable TV connections and remotes working, basically a bare-faced repeat of yesterday. This morning I went out for a haircut: my barber wore a mask but I couldn’t — the straps would have been in the way. It ain’t easy.

Donna asked if I wanted anything for Father’s Day and I said no, but would enjoy firing up the smoker and cooking a rack of ribs. It was indeed a fun day, made even better by a call from our son and his family. Our daughter wished me a happy Father’s Day a week early, but that’s okay, I saved and savored it anew yesterday.

As to the smoking, I tried a new, slower method of lighting the charcoal, along with a more scientific approach to regulating airflow through the smoker vents to control the temperature inside. The results were gratifying. I didn’t take a photo of the ribs, but I did take one of the grilling and smoking area, set up on our old hot tub pad: 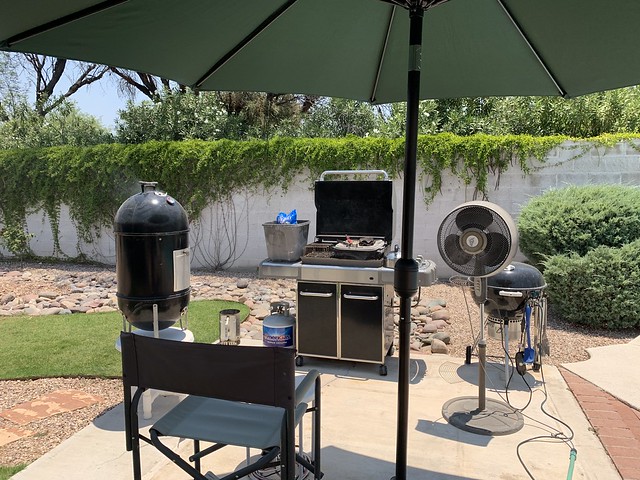 It takes about four hours to smoke a rack of ribs. Getting the smoker set up and going takes awhile, but after that things pretty much take care of themselves. I spent a few minutes with the smoker every hour, adjusting vents and adding wood chips. Knowing it was going to get up to 105°F, I set up an outdoor misting fan to keep me cool during those visits. It helped tremendously, that and the shade from the umbrella. As you can see, I put the smoker on a stand to bring the work of tending to it up to my level. There you have it: my Fortress of Smoke™.

Happy belated Father’s Day to all you dads!

One thought on “Father’s Day”