I’d be reluctant to fly the national airline of any country where corruption is a way of life. We don’t know how good we have it here in the West. In the wake of the May 2020 Pakistan International Airlines crash, Pakistan’s own aviation minister admits that as many as one in every three pilots for the nation’s airlines has a fake license and isn’t qualified to fly at all.

We like to think we’re free of, or at least able to overcome, societal, national, and racial stereotypes. Well, here’s an exercise in self-awareness for you: make a list of national flag carriers you wouldn’t fly on if they paid you.

Our daughter Polly has a move-in date for an apartment. If nothing changes she’ll move out of our house the first week of August. Wish I didn’t have to say “if nothing changes,” but with Polly it’s always best to be prepared for curveballs.

After much effort (and another trip across town to the Xfinity/Comcast store) I sorted out our cable and TV issues. So I thought, anyway. The two big TVs and their associated cable boxes are on an upgraded plan, incompatible with the third cable box/TV, the one I’d forgotten about, the one Donna watches in her sewing room, which Comcast no longer supports. I endured a descent into Comcast’s voicemail hell and finally got through to an agent. A new cable box for the sewing room should arrive tomorrow. With luck, I’ll hook it up and Donna will be happy again (you can probably guess she takes a dim view of me buying a new TV in the first place, which started the cascade of cable connection problems).

Meanwhile, the refrigerator has started leaking water. If it ain’t one thing, it’s two!

Or three! Our good boy Mister B is still sick. The veterinarian who treated him at Valley Animal Hospital said his recovery would be a long one: he still coughs and gets fevers, though not as often or as severe as before. He has some trouble swallowing and keeping food down; some of that is probably due to the meds he’s on, though the swallowing thing really worries me. We’re hopeful, and giving him lots of TLC.

If my blog posts seems less organized and more random of late, it’s because Mister B is foremost in my mind, and I hope you’ll understand.

A few entries back I wrote about live audiences on TV game shows. We were told, back in late February or early March, that shows like Wheel of Fortune and Jeopardy! were going to be taped without live studio audiences for the duration of the coronavirus pandemic. If any such shows were taped, they haven’t been shown, and I feel strongly TV networks are doing damage by refusing to air them. They’re perpetuating a fantasy that there’s nothing to worry about and no need to take precautions.

But speaking of the two game shows I highlighted in that discussion, Jeopardy! and Wheel of Fortune: the clues and answers on the first one are wide-ranging and often touch on less than pleasant realities (inflammation of the gums/gingivitis; after the deed he jumped on stage shouting “Sic semper tyrannis/John Wilkes Booth) . That never happens on Wheel, where the crossword-style answers are relentlessly bland and uncontroversial (thing/scrumptious gourmet meal; destination/tropical paradise).

What if, on Earth 2, Wheel was a little more like Jeopardy? 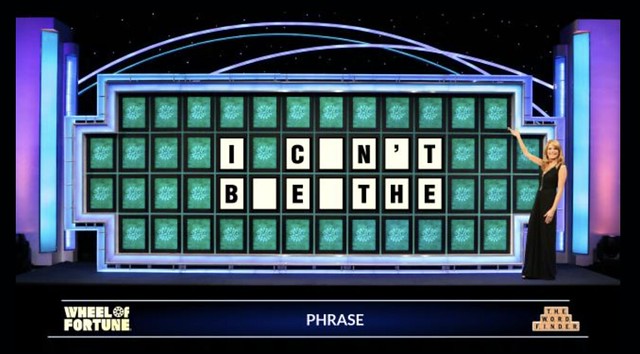