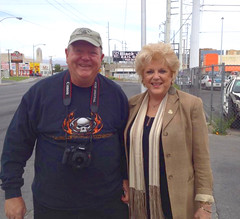 I met Mayor Carolyn Goodman in March 2014, on a motorcycle trip to visit my son in Las Vegas. She struck me as a colorful character in a city known for colorful characters, and I mean that in the best way. Her even more colorful husband Oscar, widely believed to be joined at the hip to the mob, was mayor when Donna and I lived there in the mid-1990s. They say Carolyn moves in the same crowd, but I have no idea whether it’s true or not. Anyway, I thought she was pretty cool.

I get where she’s coming from, wanting the casinos to re-open and figure out for themselves how best to protect customers and guests from the virus, with those that succeed surviving and those that don’t not. Not saying I endorse it, just that I get it. The entire economy of Las Vegas is based on gambling, hospitality, and related service industries. If there’s anyplace that has to get back to work, Las Vegas is it.

Really, how are the working people and families who live there going to survive if the casinos can’t re-open for another three months, or six, or a year, or for however long it takes to develop a vaccine?

I always thought doomsday for Las Vegas, and in fact the entire region including northern Arizona and parts of southern California, would happen when we suck Lake Mead and the Colorado River dry. But a pandemic that shuts the economy down for a year or longer would be just as devastating, and we’re only beginning to grasp the consequences.

Apocalyptic science fiction, for me and millions of other readers, has been a big help in understanding the potential impact of pandemics and other large-scale disasters like climate change and desertification. A staple of apocalyptic sci-fi is a thing called universal basic income. The baby steps we’re taking now, previously-unimaginable things like $1,200 relief checks to every adult citizen, give me déjà vu. Sinister déjà vu. Mark of the Beast déjà vu.

Don’t want to come across as a hoarder, but with news of meat processing plants closing around the country we decided to make a Costco run and stock up our freezer. Among the items we bought was a two-pack of sirloin roasts, one of which I’ll cut up today for beef and Guinness stew.

On our way to Costco we passed the corner Shell station, where regular’s still $1.97 per gallon. Let me see if I’ve got this right: oil prices have dropped to zero bucks a barrel, but for some bullshit reason that doesn’t mean lower prices at the pump? And from all the reaction I’m seeing on social media, it’s like we’re all saying “Well okay then, just keep on charging whatever, makes no difference to us”?

What is wrong with us? How is it people are marching on state capitols demanding the right to spread and die from Coronavirus, and not burning down gas stations? Pant, pant … gimme a second to get my breath back. Okay, I’m better now.

I haven’t said anything about Kim Jong Un because I don’t know what’s going on inside North Korea. No one outside NK’s inner leadership circle does. But check out this Trump bootlicker on Fox News. Talk about drinking the Koolaid!

Lou Dobbs guest says "hopefully Kim is going to be alright" and "we have to make sure [North Korea] does not become a military dictatorship"…………………. pic.twitter.com/anOWHkbA6x

Jesus H. Christ. What is wrong with people? But I repeat myself.

The local javelina pack got into a neighbor’s garbage bins a few days ago, and  I posted a photo of the carnage on Facebook: 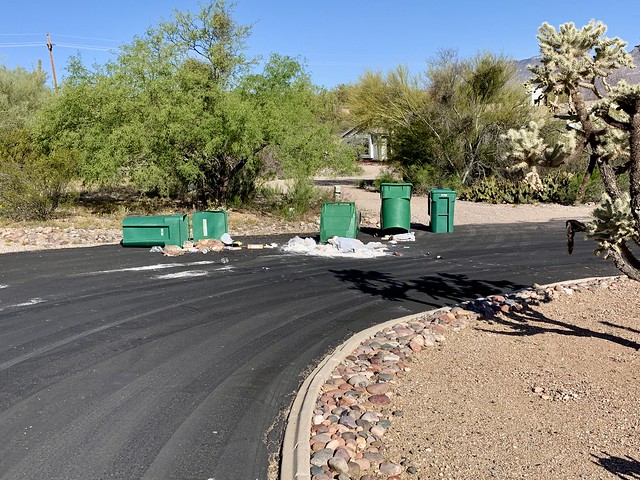 One of my friends commented on how nice our roads are compared to those in other parts of Tucson. That’s because our homeowners’ association imposes a levy to pay for patching and periodic resealing. Most HOAs on our side of Tucson don’t, relying on the county for road maintenance, and the difference is stark. Believe me, it’s worth the money. Here’s another photo I took, walking Mister B the morning after the javelina attack. 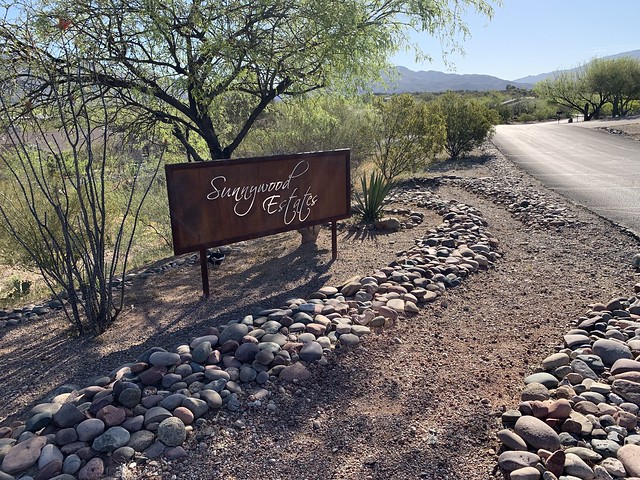 That’s the western entrance to our subdivision, looking east toward the Rincon Mountains. There’s a similar sign at the eastern entrance, but no gate at either end … we’re not that hoity-toity and make do instead with small “private community, no thoroughfare” placards. Hey, though, since we put them up last year, we see fewer cars cutting through.

Did I show you Donna’s other roses, the red ones? 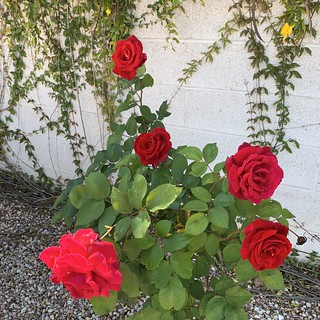 Could be worse, staying home. Time to start putting that stew together. Stay safe!

One thought on “Javelina Attack”