Days of Whine and Roses

Seeing a lot of posts like this on social media:

Why, yes, Mister Sockpuppet. Yes I do.

A guy I know fairly well (but haven’t seen in a couple of years) went hashing in Europe and the UK. This was after the Coronavirus had spread outside China and we all knew about it, but before Western countries started imposing restrictions. He went pub crawling in London the night before flying back to the States. He stopped on his way home to visit a couple he knows, started feeling sick, and began to suspect he might have the virus. He self-isolated in the couple’s guest bedroom, but somewhere in there the three of them went hashing with members of an area group … this was after WHO had declared a pandemic, COVID-19 deaths had begun to spike exponentially, and mayors and governors began imposing lockdowns.

The three of them were tested in early March. Turns out he did indeed have it. So did the wife of the couple he stayed with, likely having gotten it from him. He’s now home, recovered. I don’t know if she ever developed symptoms, or whether any of the hashers they ran with came down with it. The irony of all this is that the three of them … the guy and the couple he stayed with … are hard-core Trumpers. Even when he was sick and fairly certain he had COVID-19, he couldn’t resist spinning people up by saying that staying home and taking precautions meant they were snowflakes. I can only imagine what he’s saying to trigger the libs now.

And people ask me why I don’t believe there’s a god.

I don’t recall (and am too lazy to look up) whether I reported on the Tucson Book Hounds’ first remote meeting in March, but here’s a screenshot of our April meeting, held Saturday afternoon. 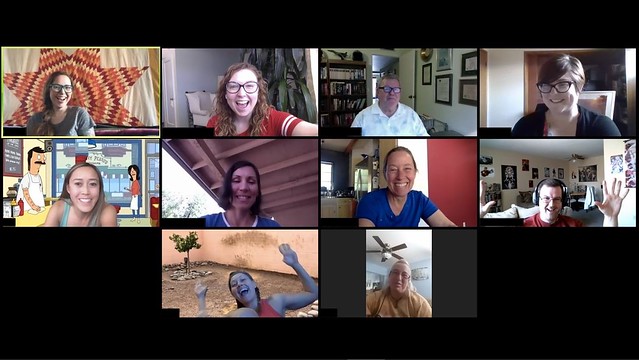 We tried Google Hangouts for our March meeting. Some of us had audio only; others could see but not hear. This time we used Zoom, which worked well for everyone. We spent as much time catching up with one another as we did on our book (The Radium Girls: The Dark Story of America’s Shining Women, by Kate Moore), maybe more. I didn’t realize until these friendly faces popped up on the monitor how starved for company I’d become. It was fun, and the only thing missing was the snacks. Now to help Donna set up Zoom for sewing guild meetings. I can use the practice: our quarterly homeowners’ association board meeting is next week, and as president it’s on me to set it up.

Who says you can’t teach an old dog new tricks?

Polly Index: still working at Amazon and healthy as ever. Three workers at her fulfillment center have tested positive, but she doesn’t know them and didn’t work around them. Her answer to the question at the top of this post is “No, I don’t.” Let us hope it stays that way. 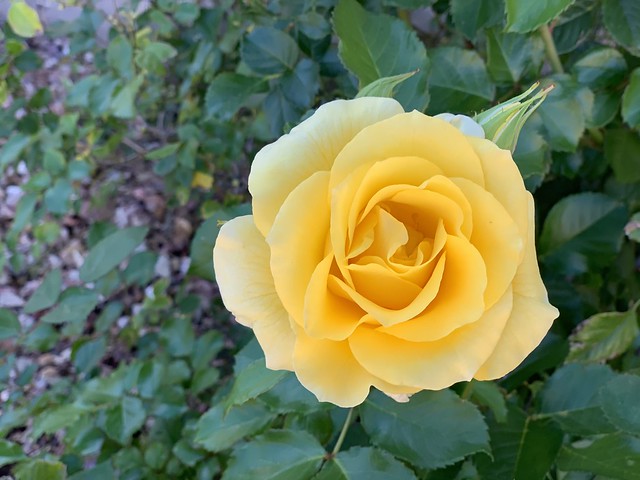 Donna’s backyard roses, despite 21 years of neglect, still come in every spring. That’s a happy note to end on, so I’ll leave it right here.