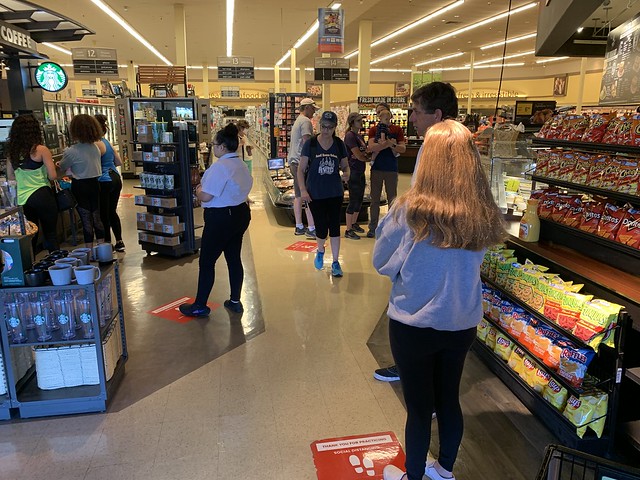 This was the Starbucks line at our corner Safeway this morning. The barista and I were the only ones wearing masks. With the exception of those two groups in the photo, most customers were at least keeping a little distance from others, but I wonder if they would have been if it weren’t for those big red marks on the floor. I keep hearing how vast majorities of Americans support stay-at-home restrictions and masking up in public, but it ain’t what I’m seeing on the ground.

And what the fuck? Still no toilet paper, flour, or yeast?

Last night Donna and I finished watching HBO’s adaptation of Philip Roth’s alternate history novel “The Plot Against America.” This morning I pulled the hardback copy off the bookshelf to read again. I read it when it first came out in 2004 or 2005, before I began reviewing books. This time I will.

The premise of the story is that in 1940 Charles Lindbergh runs for president and wins. His new administration comes to an agreement with Adolf Hitler and America stays out of the war raging in Europe. At home, Lindbergh implements voluntary (at first) programs to help urban Jews assimilate into heartland America. The Klan, and American brownshirts, aren’t long in making sure Jews get the message. The story is told from the POV of a Jewish family in New Jersey, presumably not too different from the one Philip Roth grew up in, and IMO is some of his best work.

I grew up in the 50s when heartland children knew only the heroic side of Charles Lindbergh. Although the bad side was public record … Lindbergh’s cozying up to the Nazis, his championing of the America First Committee, his open anti-Semitism … none of it was taught in school.

I thought it interesting that in the HBO series Lindbergh is more or less an empty suit; it’s his inner circle, notably Henry Ford as secretary of state, who do the most to undermine American democracy and institutions. I don’t remember if that’s how Roth depicted Lindbergh in the novel, which is one reason I want to re-read it.

In the actual plot against America, the one unfolding around us today, Trump has surrounded himself with toadies. With two notable exceptions, Bill Barr and Stephen Miller, the deliberate undoing of all that is good about America comes from Trump himself. And not a goddamn one of this crew can fly a plane.

I want to tell myself we’re going to crush Trump and the fascist Republicans who’ve hitched their wagons to him in November, but fuck me, I didn’t think he had a chance in 2016 either and look how that worked out.

Hey, I joined Twitter in 2008. Does that mean my vintage account is worth something? Apparently it is, to someone (or something, more like). Where do I cash in?