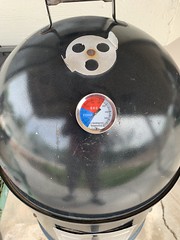 I’ve never been a scientific smoker, but have to admit regulating the temperature inside the smoker seems to produce better results. My son has been outshining me in the smoked meat department for a couple of years now, and that’s how he does it. Well, old dogs can still learn, hence the latest upgrade to the Fortress of Smoke™.

Mister Fixit here ordered a thermometer from Amazon and installed it on the lid of the smoker earlier this morning. It required drilling a 3/8″ hole through the lid. Donna, when she notices, will probably express surprise I didn’t just buy a whole new smoker, since the ones built this century come with them. Don’t think I wasn’t tempted.

As long as I’m crowing about my handyman skills, let me brag about moving the smoker from the former hot tub pad to a new storage location under the patio roof. Of course it’ll have to be moved back out into the open for actual smoking, but when not in use it’ll be where rain and sprinkler water can’t get into that eight-dollar thermometer and ruin it.

This is the hot tub pad, now our grilling and smoking pad (minus the smoker, now under the patio roof): 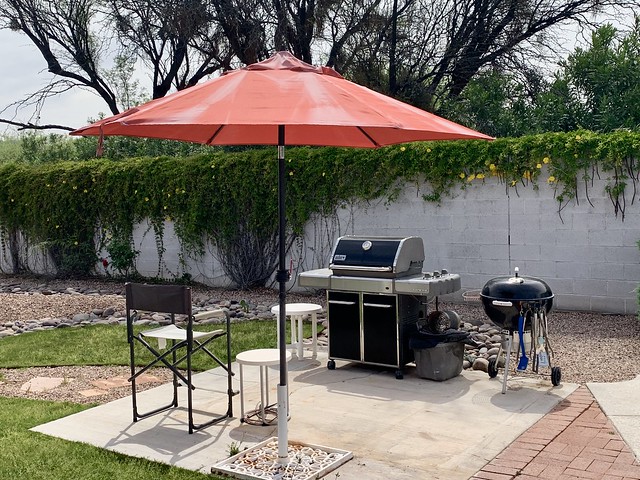 I took the inset photo at the top of the post around 9 AM, noting that the temperature inside the smoker was already over 100°F. Tucson’s scheduled to hit three digits this week … no surprise the interior of a covered black metal cylinder is already there and then some. And yes, before you ask, the house A/C’s been on since Friday.

Donna and I still dress for the day every morning, though by the time we sit down to watch the nightly news we’re usually in our jammies. I found my favorite pair of socks at the bottom of the drawer today and put on shorts in order to show them off. 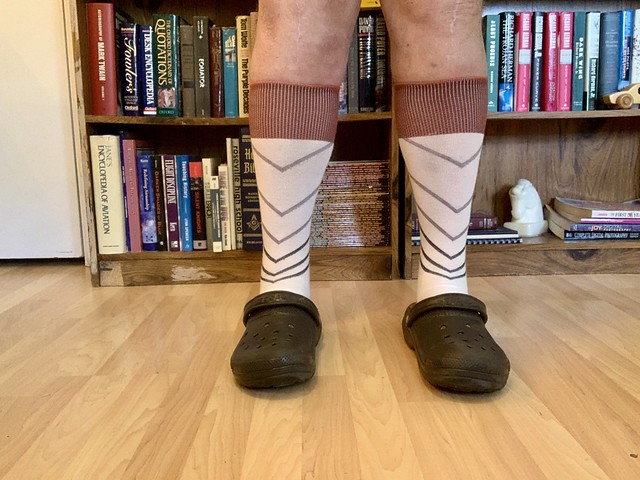 One of the pups threw up the night before last, but we don’t know which one. When you’re looking for signs a dog may not be feeling tip-top it’s easy to see them in every little thing they do. In any case, by the next evening they were both fine again, with good appetites, and the crisis had passed. 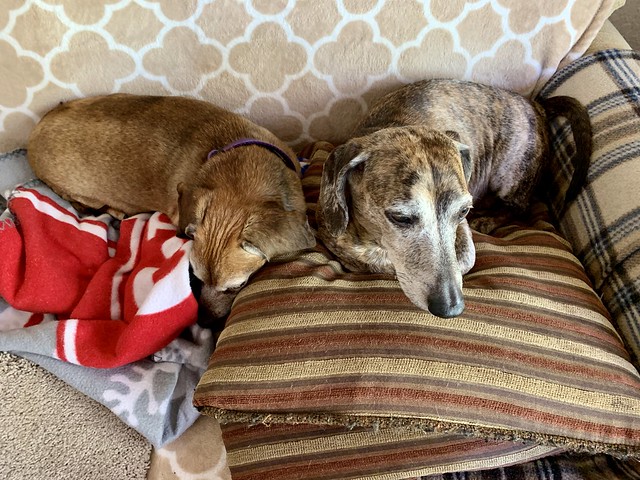 Polly Index: no change. Which is good!

Meanwhile, Trump, who confuses the Pulitzer with the Nobel (and probably can’t spell “Pulitzer’ either), threatened to strip reporters of non-existent “Noble” Prizes while complaining because he didn’t get one, now says he’s taking a break from the daily Coronavirus “briefings” (i.e., campaign rallies). Wanna bet that won’t last the day? He can’t not get in front of a camera any more than [insert insulting analogy here, add “fucking moron” for effect, express existential horror at his continued hold on the White House, try to imagine where the nation might be today if the person we actually elected hadn’t had the presidency stolen from her]. 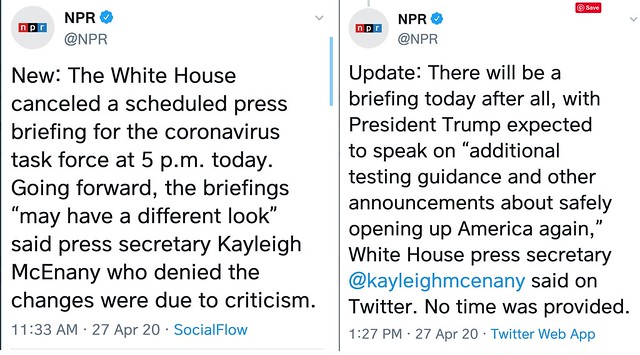