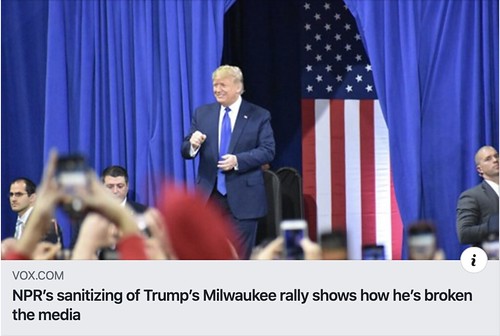 I linked to this article yesterday, and a friend on Facebook responded with a plea for civility. More accurately, she wanted to know what’s wrong with the media being civil in its reporting on Trump. The article is a straightforward description of how American media (NPR in this case, though they’re all guilty of it) normalizes Trump by glossing over many of the things he does and says, trying to appear neutral and balanced by reporting on him as if he’s just another in a long line of normal presidents … when he is anything but.

From his birtherism to his documented history as a sexual predator, from his chants of “Lock her up!” to accusing the press of being an enemy of the people, from his open violations of the constitutional prohibition against using his office to enrich himself to withholding aid to a US ally in exchange for dirt to use against his likely opponent in the next election (for which he was actually impeached, becoming only the third president to bear that distinction), there is nothing normal about this guy, and what I want to know is what’s right about the media being civil in its reporting on Trump. But I’ll settle for not normalizing his actions and behavior.

And now this Lev Parnas guy comes forward with texts, emails, and personal notes from March 2019 that show him and a thuggish US congressional candidate named Robert Hyde discussing the stalking and possible killing of the US ambassador to Ukraine, Maria Yovanovitch, a person the administration wanted out of the way of a deal it was cooking up with Ukraine’s president (in fact, Trump fired Yovanovitch a month later, in April 2019).

The congressional candidate, Hyde, is known to have rubbed elbows with Trump at Mar-a-Lago. Parnas was working for Rudy Giuliani, Trump’s personal attorney (and the man leading the effort to get the president of Ukraine to publicly announce a corruption investigation of Hunter Biden, son of the man most likely to face Donald Trump in the 2020 presidential election). Parnas, too, has rubbed elbows with Trump … not just at Mar-a-Lago but also at the White House. It’s going to be hard to gloss over the obvious conclusion that if Parnas was discussing offing Yovanovitch with Hyde, Giuliani knew about it, and that if Giuliani knew about it then so did Trump. As I commented in an earlier post, “The fish rots from the head. It’s right in front of us, and we just don’t want to smell it or think about it, but we can’t ignore it much longer.”

But I’m sure NPR, CNN, and the New York Times will find a way. Maybe they’ll describe stalking and talking about offing a US ambassador as one of a number of personnel actions that were on the table. Both sides. Civility. And what about Hillary’s emails?

In a related thought, I remember asking what was up with Secretary of State Mike Pompeo back when Trump was smearing Ambassador Yovanovitch, and why he didn’t come to her defense. I had only recently realized Pompeo was a West Point graduate and former Army officer. The concept of standing up for your troops is a central tenet of military leadership, and Pompeo’s refusal to do so was striking. At the time, I figured the answer was that he’d turned his back on quaint military ideas like honor in order to suck up to Trump, but now I’m wondering if he was in on the assassination discussion as well.

I swear, it’s like biting into a sandwich and discovering it’s full of writhing maggots. How is any of this normal? What is wrong with us that we want to pretend it is?