Cupboards and Books and Toadies, Oh My!

Can you stand another kitchen remodeling update? 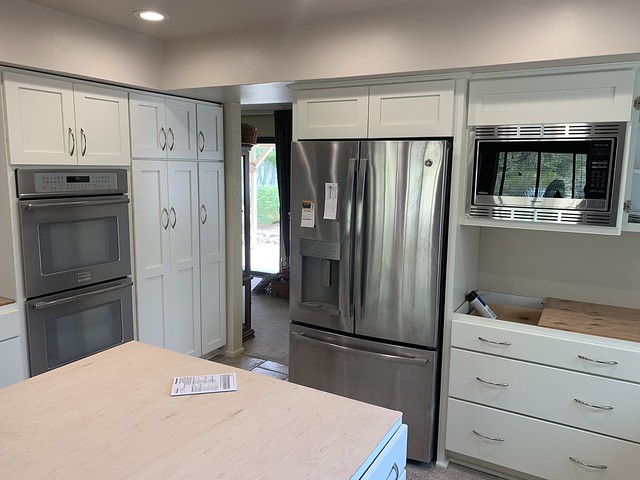 Here’s the latest: the cupboard and drawer pull handles are installed, the fridge and ovens have been installed and connected, and the new microwave is in its special cubby. We laid plywood down to make working surfaces until the granite countertops are installed next week, along with the new cooktop, pulls for the small cabinets like the ones above the fridge, top trim for the cupboards on the left, the new sink, and the splash tiling. I didn’t photograph it, but the replacement floor tiles are in as well.

So to a degree we can now cook, but we still have to carry dirty dishes and utensils back to the deep sink in the laundry room to clean up. Our old countertop microwave will go with Polly when she saves up enough money to move into a place of her own (part of our concurrent daughter remodeling project).

I’ve missed the last two or three monthly book club meetings, and I’m determined to go today even though I gave up on the assigned reading, Night Film by Marisha Pessi. The category for November was horror, but I didn’t find the novel even slightly scary, and there were more appealing selections in my to-read queue. Not to worry, I won’t bad-mouth it at the meeting if others liked it.

But hey, today we’re doing a book exchange, and that’s really why I’m going. We’re each supposed to bring two favorites: the ones I’ve picked are The Plot Against America by Philip Roth and King of the Badgers by Philip Hensher. Two Philips, and I’m tempted to bring a third, Philip Pullman’s The Golden Compass, but suspect everyone’s already read it.

I know from Facebook that many of my friends are also members of local and neighborhood book clubs, and it gives me hope. We are smarter and more intellectually curious than you might assume from the crap we normally post on social media. Now if we can just get off our asses and vote, eh?

I’ve been meaning to share some thoughts about the corrosive effects of bad leadership. Trump’s had nearly three years to replace cabinet secretaries and agency heads with yes men and toadies who share his petty vindictiveness and lack of values. The rot’s so deep now I wonder if we’ll ever fully recover.

Just the other day I read an article about a smear campaign conducted against a career State Department employee by top-level Trump appointees who openly bragged about demoting her after falsely branding her of being a disloyal Obama appointee (she was hired under the George W. Bush administration) and an Iranian national (she was born and raised in America). This was my reaction, which I posted on Facebook and Twitter:

This is the sort of behavior you’d expect from a couple of low-level Beavis & Butthead wage-scalers in the mail room. Not senior leadership. But #Trump has brought the playing field down to his level.

But this guy, last night, said it better, and far more forcefully:

If you’re not one for clicking on videos (maybe you’re at work, or maybe you just hate them, as I do), here are some of the things Mr. Rosenberg had to say about Pompeo’s lack of support for one of his own ambassadors:

Like any leader, I think he has three obligations: First to the public, the American people, second to the mission of his agency, and third, and just as important, to the men and women who serve in that agency. His silence is deafening. It is an act of abject cowardice.

I’m astonished that somebody who went to West Point and was an army officer does not have the spine to stand up for the people in his organization who are being denigrated by this president. That silence, as I said, is deafening, and it is disgusting.

What I see from him is a complete lack of leadership. I doubt he’s watching this show, and I doubt he’s listening to me, but if he was, I would tell him he’s a coward.

I haven’t paid much attention to Pompeo, who in my view was just another yes man, just another Trump toady. Until Chuck Rosenberg said it on TV last night, I hadn’t realized Pompeo was a West Point graduate and former Army officer. That really shows me how pervasive the rot is, because standing up for your own people is so deeply ingrained in the military’s idea of leadership, along with quaint notions like praising in public but criticizing in private, not to mention common everyday decency.

When I was a career officer, I knew of a few cases where shitbirds like Pompeo managed to pull the wool over their superiors’ eyes and get promoted into senior leadership positions, but I could count them on the fingers of one hand. I wonder now how many Pompeos are wearing stars today. I probably don’t want to know the answer.

The fish rots from the head. It’s right in front of us, and we just don’t want to smell it of think about it, but we can’t ignore it much longer.

Look, everyone, join a book club, get smart, and vote.