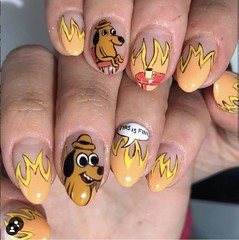 Great graphic for a rant, am I right? I can’t resist sharing it, even though I’m not up to yelling at clouds today. You can expect to see it again in future posts, though.

If I had a rant in me this morning, I’d lay into NPR for its slavish commitment to normalizing Trump, arguably not the worst unelected occupant of the White House (George W. Bush still has that distinction IMO), but certainly the most abnormal.

Just one tiny, wafer-thin example of NPR’s habit of pretending everything’s okay: during an Independence Day speech, our very stable genius said this: “Our army manned the air, it rammed the ramparts, it took over the airports, it did everything it had to do, and at Fort McHenry, under the rockets’ red glare, it had nothing but victory.” I know this isn’t the first time you’ve heard of this. It’s been all over the news, and even if you never watch the news, every other entry on Facebook and Twitter has made fun of Trump for saying it.

And here’s the thing: I listen to NPR news every morning on the bathroom radio as I make myself ready to face the day. Five whole Morning Edition shows have aired since Trump made that speech, and I’ve yet to hear NPR mention those Revolutionary War airports. The meme the lady has painted on her fingernails sums up NPR’s Trump coverage to a T: everything’s cool, both sides do it, this is fine.

I’m going to the gym and might have to finish this entry later. Such a drag, psyching myself up for a workout, but I always feel better afterward.

I’ll stop at the library on my way home to turn in this month’s book club selection, “The Friend,” by Sigrid Nunez, purportedly about a woman and her dog but actually about suicide and the miseries of being a self-absorbed writer, not my cup of tea at all and one I don’t mind not finishing. Hey, though, I did get through most of it.

I took Mister B out for a walk this morning but as soon as he saw the garbage and recycle bins on the street he hunkered down and refused to go a step further. I should’ve remembered: he’s afraid of the garbage truck that comes Tuesday mornings. I normally step off the road with him and onto a neighbor’s yard when the truck comes up the street, but sometimes that’s not enough and I have to pick him up and hold him until it’s out of sight and earshot. Today it was no way Jose, take me home now! One of Polly’s stray cats got squished by a delivery truck a couple of months ago, and maybe he remembers that. I’ve learned not to underestimate Mister B’s intelligence, powers of observation, and memory. If he’s concerned about the garbage truck, it’s probably justified.

So that’s as far as I got before gym time. And just as I thought I would, I feel great now. So great I’m ready to hit the gym again. But I know that next time, and the time after that, I’ll have to psych up all over again. No wonder I have trouble keeping resolutions … I’m a slacker at heart.

In a previous post I mentioned Pima Air and Space Museum’s secret plan to replace volunteer docents with paid guides for its Boneyard tours. Not only did the secret get out, they went and did it, hiring three guides (two of them former Boneyard volunteers) to conduct Monday through Friday tours of the 309th Aerospace Maintenance and Regeneration Group (they hate it when we call it the Boneyard), adjacent to PASM. I don’t know if similar changes are planned for the tram tours on PASM grounds, my volunteer docent speciality, but I would not be surprised.

For now, though, my services are still in demand at the museum and I volunteer every Monday. Since the first scheduled tram tour isn’t until ten, I have time to wander around the grounds beforehand. If you follow me on Facebook or Instagram, you know I post photos of one plane or another every Monday. These days I’m trying to master the portrait mode on my new iPhone camera. Here’s a selfie from yesterday, with a Beechcraft Expeditor in the background: 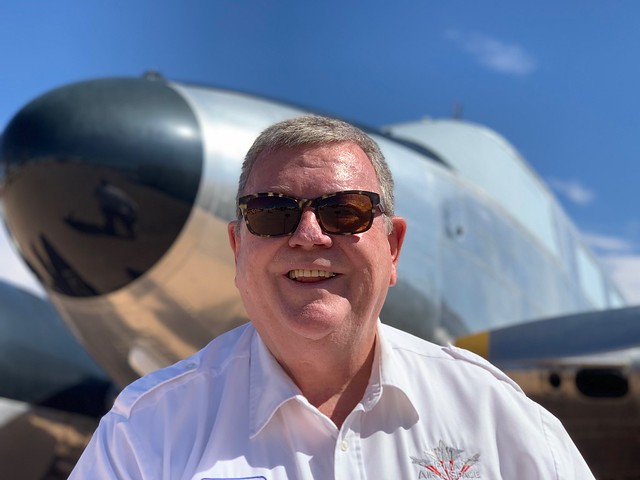 There’s a small restoration building next to the Beechcraft. They usually leave the side door open so that visitors can take a peek inside. I wandered over and looked in, and this is what I saw: 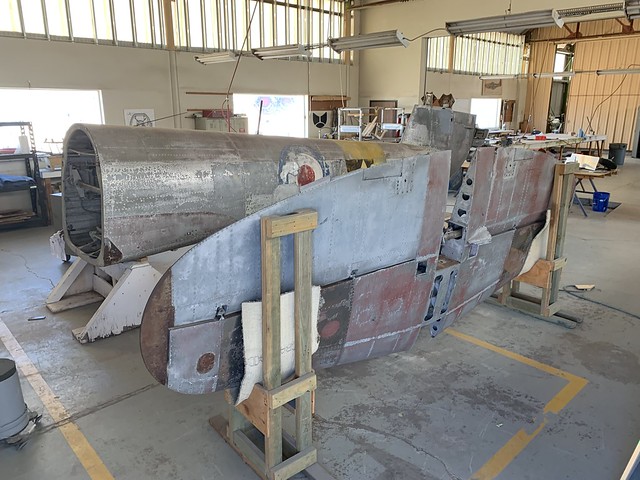 I try to stay up on what’s going on in restoration, but this was new to me and there wasn’t anyone around to ask. Two clues, the roundel and the way the horizontal tail mounts partway up the vertical tail, suggested a late- or post-WWII British fighter. I started looking through photos of piston-engine and turboprop fighters of that era but couldn’t find one with a T-tail configuration. I expanded my search and found an early jet fighter, the Gloster Meteor (the only Allied jet fighter to fly combat missions during WWII), that matched. A friend on the museum staff later confirmed my guess: it’s a Gloster Meteor T.7, the two-seat training version, and he told me the museum has “most of it.” Well, that’s intriguing … I wonder what parts are missing?

I’ll share an additional photo, one I took the previous Monday morning, of some aircraft sitting in front of the main restoration hangar. 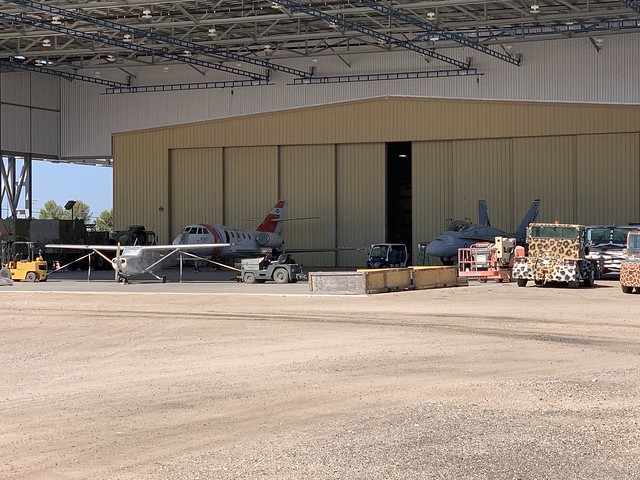 Visible here are an F/A-18, a Coast Guard Dassault Guardian, and a Cessna 172. I’m particularly interested in the Cessna, which came to the museum wearing white and red civilian paint but has now been stripped down to a bare aluminum finish, and I can’t help hoping the museum will restore and display it as a T-41 Mescalero, the military version of the Cessna 172 I soloed in during USAF flight screening at Hondo Airfield in Texas back in 1973. That would be cool.