Spotted on our neighborhood message board this morning:

My kids are very worried about a black cat that we have seen roaming about for a few weeks now. They want to find its home. Does anyone know if this cat belongs to anyone. Thanks!

The black cat, which has no name, is one of our daughter Polly’s creatures, a stray she took in. What do you want to bet Sunnywood Estates is soon at war, with us at ground zero? God damn it, they were right all along … black cats are bad luck!

Moving on: I remember when Ellen DeGeneres was an up & comer known for intelligent standup, and later as a brave pioneer for coming out on TV when doing so could easily have killed her career. That’s not the Ellen I see today when Donna (who can unerringly find her on one or another of 400+ channels with no more than two clicks of the remote) takes over the TV. Ellen’s appeal now seems, to me at least, depressingly lowest common denominator: daytime TV-style celebrity infatuation, with a screaming studio audience.

I’m coming to dread what I once welcomed: the future. Specifically the looming threat of assisted living, where we all know what’ll be on in the TV room: Good Morning America, soaps, Wheel of Fortune, infomercials, Ellen in the slots between. When the men get their turn, it’ll be Fox News and ESPN.

Well, maybe I’ll be able to lock myself in my room and read … let’s hope I don’t go blind.

My interest was piqued this morning by an article headlined “Boeing’s radical ‘transonic’ wing design could mean higher, faster airplanes.” Wait a minute, I said to myself, jet aircraft have always been transonic. Some WWII prop fighters could go transonic. What’s radical about that?

I clicked the link, where I read this astonishing statement:

During development, which is still at conceptual phase, engineers have also been able to obtain an increased top speed from a planned Mach 0.70-0.75 to Mach 0.80, only slightly below the speed of sound, or Mach 1.

The F-15s I flew, though capable of speeds in excess of Mach 2.0, cruised at Mach 0.9 or slightly faster. Boosting airliner cruise speeds into the Mach 0.9 range would be a significant development, and perhaps that’s what Boeing’s “radical transonic wing design” is meant to help achieve. Meanwhile, when reading about aviation and aircraft, keep a grain of salt handy … the people who write those articles often have only the haziest notions of the subjects they’re assigned to cover.

For example, the brouhaha (love that word) over the Israeli F-15D that recently lost its canopy at 30,000 feet. Media reports, like this one on the Jalopnik website, breathlessly portrayed the incident as a catastrophic emergency, one from which the crew’s safe recovery was nothing less than a miracle. Which gets clicks, and I suppose that’s what it’s all about.

In fact, though, there have been other F-15 canopy losses over the years. I once talked to a fellow Eagle driver who lost his canopy in a single-seat F-15A; he said it was no big deal. The windscreen, which is fixed to the airplane, protected him from the wind blast. He lowered the seat, pulled the throttles back, descended to a lower altitude, and found a safe place to land … which is exactly what the Israeli aircrew did in the most recent incident, the difference being they were flying a two-seat family model. The guy in back was exposed to considerably more wind blast than the guy in front, but he survived … he didn’t even lose his helmet.

As long as we’re on fighter jets and fighter pilots, get a load of this: the American Family Association is advertising a 12-disc video series it says will convince Christian men to abandon pornography by showing them men at war … specifically fighter pilots in fast jets … and a “battle plan for purity.”

Speaking of Soesterberg Air Base, here’s a photo our friend Peter sent yesterday. 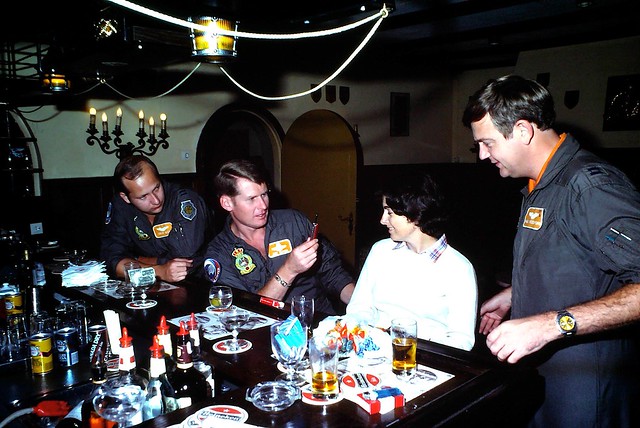 Peter, who was our Dutch liaison officer at Soesterberg, took this photo one night in the American Officers’ Club bar. Donna and I are on the right, talking with two of our 32nd Tactical Fighter Squadron mates, Steve Beck and Jeff Cliver. I didn’t know this photo existed until yesterday, and today memories of those days are flooding back. Thank you, Peter!