Here are some things I’ve been thinking about this week:

The V-2, Chabon rhapsodized, with its sleek cigar-shaped body, pointed nose, and swept-back fins, entered the imaginations of people the world over. It lent its iconic shape to the science fiction spaceships of the 1950s and 60s, and still has a firm grip on our dreams. Many of us remember a centerpiece of the original Disneyland, the needle-nosed TWA Moonliner standing tall on its launchpad in Tomorrowland.

Elon Musk posted this image on Twitter yesterday, helpfully pointing out that it’s an actual photo, not an artist’s rendering as most viewers might at first assume. If you look closely, you can see a SpaceX engineer standing beneath it. The rocket is a small test version of what will some day be the SpaceX Starship.

Michael Chabon, you are so right! And Elon Musk, you’ve got your problems, but I’ll take you over that blood-stained Nazi Wernher von Braun any day!

Until now, mankind has been unable to penetrate it. Ladies and gentlemen, I give you the next Chuck Yeager, determined to push beyond the Lie Barrier to see if it’s true that fact and fiction are reversed on the other side.


This rivals even Chico Marx’s famous line, “Who you gonna believe, me or your own eyes?” Trump literally says he said Mexico would pay for the wall, then in the same breath says he never said it. Absolutely staggering.

Years ago, on a lonely stretch of road, I hit “scan” and the radio locked onto an AM talk station where some asshole was blaming the recent crash of an airliner not on pilot error, weather, or mechanical failure, but on Democrats. He repeated the point several times, with piggish single-mindedness. What a stupid fuck, I thought. That was my introduction to Sean Hannity. 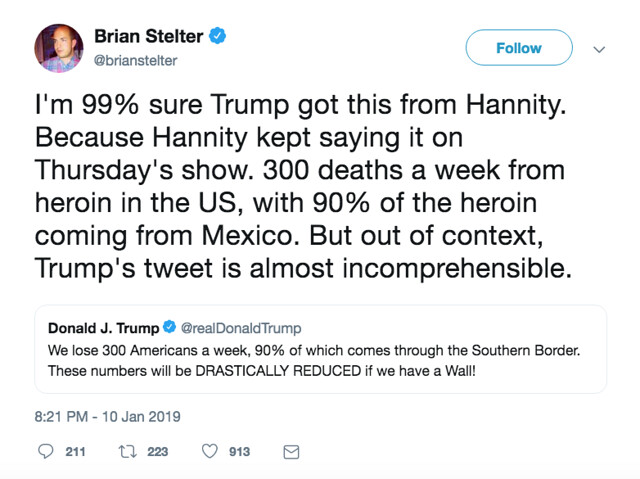 If you’d told me then that stupid fuck would some day be the trusted advisor to an even stupider fuck installed in the White House by a foreign government, I’d have floored it and aimed for the nearest bridge abutment.

Finding money to spend on aerial refueling tankers instead of fighters and bombers is as much of an uphill battle as coaxing politicians into spending tax money on repairing infrastructure: there’s no glamor in it, and little sense of urgency.

Apart from 60 KC-10 Extender tankers, introduced in the 1980s, the USAF’s tanker fleet is made up of KC-135 Stratotankers, almost 400 of them, the newest of which rolled out of the Boeing plant in 1965. We plan to keep the 135s in service until 2040 and perhaps a little beyond, if you can believe it.

You can’t say the issue’s been totally neglected, though. In 2001 the USAF decided to lease a fleet of new tankers from Boeing. That turned into a corruption scandal: people went to jail, others were fired, and the deal fell apart. In 2006 the Air Force tried again, this time deciding to buy and operate its own tankers. After reviewing proposals from defense contractors, the USAF in 2008 awarded a contract to Airbus for a couple of hundred tankers based on the 330 airliner, to be built with American labor in a new factory in Alabama. Boeing protested the award and everything ground to a halt. In 2011, after a new round of proposals and reviews, the Air Force gave the contract to Boeing. The new tanker, as with the original leasing scheme of 2001, would be based on the 767 airliner and would be called the KC-46 Pegasus.

Eleven years later, this is the latest headline: USAF Finally Accepts Its First KC-46A Tanker, but the Design Still Needs Years Worth of Fixes. Yes, the new tanker’s been in flight test this whole time. I can’t find the exact number, but I think fewer than ten have been built. Four KC-46s from Boeing’s test program will be turned over the the USAF this month; the first one, as the article says, was handed over yesterday. Eventually, the USAF will have 179 KC-46s.

The linked article is the best I’ve seen to date in terms of explaining ongoing problems with the new tanker’s refueling system. One problem that jumps out at me is that the KC-46’s boom, in its present state, won’t positively lock into a receiving aircraft’s refueling slipway without a firm push (1,400 pounds’ worth) from the receiver (and without a positive lock, you don’t get fuel).* This could be a problem with aircraft that don’t have a lot of thrust in reserve, like the A-10 in the photo. Reading the article closely, it even appears receiving pilots might have to push against the boom the entire time they’re refueling, and that doesn’t sound like any fun at all.

I’ve been there with malfunctioning KC-135 booms, where I had to bump the F-15’s throttles to push against the boom until it locked. In my experience, at least, once the boom lock engaged I didn’t have to keep pushing. Once, though, on a cross-Atlantic flight from the Netherlands to Florida, one of our squadron mates had a malfunctioning slipway that required him to keep a constant push against the tanker’s boom the whole time he was refueling, which amounted to five or six 10-20 minute sessions over the course of the flight. He was exhausted by the time we finally landed.

Normally, development problems encountered in flight test are fixed before the USAF accepts a new aircraft, but hey, we’re on the other side of the Lie Barrier now and all the rules are different. Did I mention Trump’s new acting secretary of defense, Patrick Shanahan, was a Boeing executive from 1986 to 2017? He has a long history with the 767 program, over a time span encompassing both the original leasing scandal and the subsequent protest of the Airbus contract … but I allege nothing, and will even throw in a couple of extra allegedlies to cover my ass:

By the way, that Airbus tanker? It’s called the Airbus A330 Multi Role Tanker Transport, and it’s been in service since 2011 with the UK, Australia, Saudi Arabia, Singapore, France, and the UAE. It will soon join the air forces of Poland, the Netherlands, Norway, and South Korea. And it works just fine.

*Update (1/12/19): A friend who works for the USAF as an aeronautical engineer at Wright-Patterson AFB points out that the 1,400 pound force resistance issue is on the USAF, which specified it in the contract, not on Boeing, and that the USAF has agreed to pay Boeing for modifications, which may take up to two years.

One thought on “Air-Minded: Tankers … in Spaaace!”