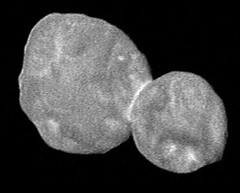 It’s an old tactic, attempting to shame and shut down one side of a debate by invoking the evils of Nazi Germany, as in “Oh yeah, you know who ELSE wanted a wall?” A Norwegian friend tells me they call it “Hitlering” over there.

A couple of days ago, as the New Horizons probe neared the distant planetoid 2014 MU69, NASA began calling the object “Ultima Thule.” Newsweek was quick to sound the alarm: NASA Named its Next New Horizons Target Ultima Thule, a Mythical Land with a Nazi Connection.

Ultima Thule, a name for distant unknown regions and the extreme limits of travel and discovery, has been in use for thousands of years. Now it so happens that Nazi mystics in the 1930s and 40s co-opted the name to refer to a mythical homeland of the Aryan race. Many seized on this small part of Ultima Thule’s history to label NASA’s use of it Nazi-like and even anti-Semitic, a slap in the face of the 6 million killed in the Holocaust.

Social media was filled with amateur examples of Hitlering. To give you a flavor, here’s a representative tweet from a concerned citizen:

Hey everyone who feels compelled to write me and say, BUT THE DEFINITION IS THIS. Stop. I am aware that the words Ultima Thule were around before Nazi’s. The point is that any whiff of Nazi *anything* doesn’t belong near a NASA mission. This is not hard to understand.

If my father was still around, he would be devastated that @NASA has chosen to use the name “Ultima Thule” as part of its scientific exploration.

“Ultima Thule” tastes like white supremacy and violence and genocide.

It does not taste like science or space exploration.

I’m not making fun of anyone. These complaints are sincerely felt … the author of the second tweet, for example, is a Jew whose father experienced horrific anti-Semitism in his day, and who has every right to Hitler NASA over the name Ultima Thule. But in this case at least, invoking the memory of Hitler and the Holocaust failed. NASA still calls the snowman-shaped object Ultima Thule, and the controversy seems to be dying down.

Did anyone ever really think invoking Hitler and the Holocaust was a sure-fire way to shut down the other side in a debate? I ask because both progressives and conservatives have been Hitlering one another’s arguments since the end of the Third Reich and to my knowledge it’s never once shut the other side up.

This doesn’t mean we shouldn’t ever invoke Hitler. Trump’s demonization of Latin American and Muslim immigrants and his policy of separating migrant families crossing the southern border and locking their children up in internment camps: these actions are plainly Hitleresque and cry out to be condemned as such. Not to do so … that would be the real slap in the face of the 6 million killed in the Holocaust.

Just don’t expect it to stop Trump from what he’s doing.

Update (later, same day): My Norwegian friend had a point to make about Hitlering, and I didn’t mean to ignore it in this post. It’s not entirely true that Hitlering never shuts anyone up. Anyone on the left, that is. A lot of well-intentioned people are reluctant to voice concerns about large immigrant populations that resist assimilation and the long-term effects that may have on society and culture, lest they be accused of racism. Others are reluctant to speak out against Israel’s treatment of its Palestinian population lest they be accused of anti-Semitism. I’ve zipped my own lip a number of times on various topics where I sense my opinions would alienate friends and people I respect. Hitlering, in these cases, does have a chilling effect on debate, at least on one side of it. The other side, of course, could not care less, and probably takes pride in its racism and anti-Semitism.