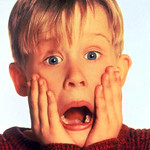 Fending for myself: Donna drove to Palm Springs to spend a few days with her sister and niece. Right after she left I heard one of the dogs howling. And she thinks they love me more than her!

Since I had the TV to myself last night, I turned on Netflix to watch what must be the shittiest Stephen King movie ever, “Stephen King’s Silver Bullet.” In terms of dialog, hammy acting, even the color and graininess of the film, it might have been a spaghetti western (or a 1980s porn flick). Afterward I cleansed my mental palate with the first episode of “3%,” a Brazilian sci-fi TV series, followed by an episode of “Buffy the Vampire Slayer.” We never watched Buffy back in the day. Friends kept telling us it was good, and maybe even culturally important. Okay then. Don’t know about Donna, but Buffy’s growing on me.

Donna’s back went out again earlier this week, forcing her to delay the Palm Springs trip one day. I’m worried her back issues are becoming chronic. She started physical therapy, and if it has a positive effect we’ll have to get her an Anytime Fitness membership so she can continue exercising once the PT runs out. For sure my own Anytime Fitness membership needs more use than it’s getting.

When I think of going to the gym I think of Fox News, because the gym rats work out to it. Speaking of right-wing media, have you noticed how all the interviewees on NPR these days are conservatives and administration apologists? Despite the liberal bent of some NPR correspondents, this translates to a near-constant pro-Trump message. At NPR, progressives are out of power and thus out of fashion. The welcome mat is still out at Chris Hayes’ and Rachel Maddow’s shows on MSNBC, but that may be only because conservatives, GOP congressmen, and Trump administration officials refuse to go on those shows.

That’s not to say prominent progressives with media platforms aren’t still out there. God knows a lot of them are raking in money making fun of the naked emperor, but as I said many times during the heyday of Jon Stewart and The Daily Show, making light of existential danger helps the wrong side. I keep remembering a friend’s incisive remark on Jon Stewart’s retirement:

She was right. We laughed, and look where we are now. Sure, we’ve still got Stephen Colbert, Trevor Noah, and Alec Baldwin on SNL, but like Jon Stewart, they’re part of the corporate media system. The net effect of their satire and comedy is the venting off of rage at the sharp rightward turn of American politics and governance. Laughing and sneering does nothing to stop the immiseration of American lives or the dismantling of institutions and society. Action is what we need … and that, I believe, is nowhere on corporate media’s list of priorities.

Oh there I go again. You’ve read it all before. I can’t promise I won’t subject you to more in future posts, but we’ll move on for now. Here’s a photo of my friend Ed’s garage, or maybe I should say “garage complex” (I can only dream). 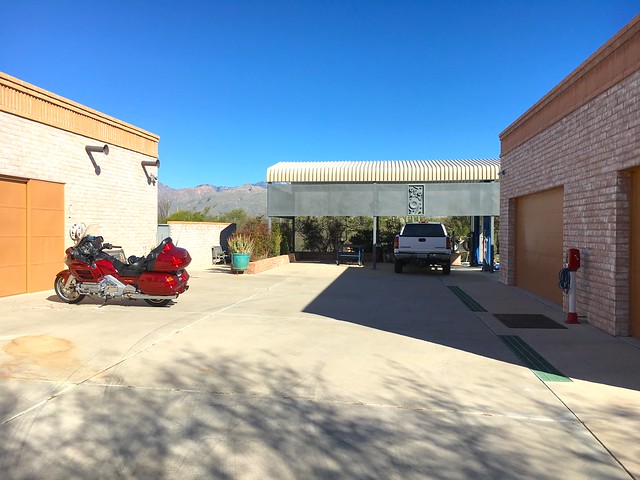 That’s my Goldwing. The heated handgrips, installed by the dealer when I bought the bike in 2001, finally gave up the ghost. Ed helped me replace them with an aftermarket set, a long job but a successful one, and now I’m ready for the return of winter weather.

But is winter over? It sure seems that way, at least here in southern Arizona. It’s been in the 70s and 80s. Every night the weather lady on TV promises the return of colder weather, but after you sit through commercials waiting for an actual number, it always turns out what she means is a drop into the 60s. Sure, it’s nice to be able to open up the house during the day, but we’re going to pay for this warm winter in a few months.

Here’s a job I was able to do myself in our own small, inadequate garage: installing a new set of handlebar grips on my mountain bike. I’ve been wanting to replace the flat handlebar with a buckhorn, but it’s an expensive proposition, especially since the cables for the gear shifters wouldn’t reach and would have to be replaced. 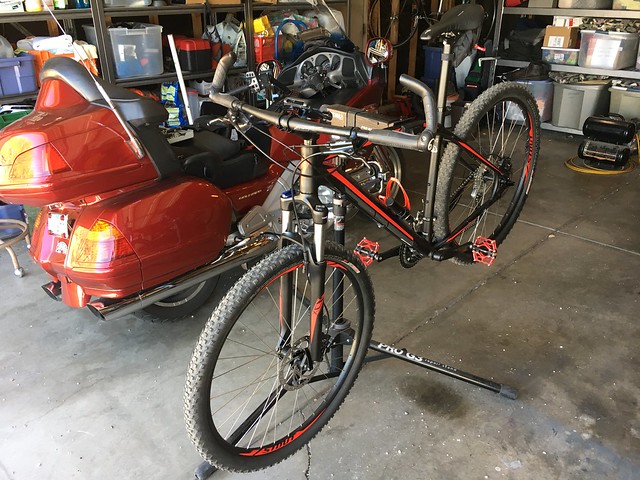 Our bike shop guy pointed out these grips, which have adjustable extensions that curve back inward. Now I can rest my hands higher and sit up straight when riding hunched over gets old (i.e., after about five minutes). Normally I don’t undertake handyman work when Donna’s away. I’m not to be trusted with tools, but this job went off without a hitch.

I’ve been feeling the need to meet more people and do more volunteering. I was invited to a Rotary Club meeting yesterday, an organization that raises a lot of money for worthy services and charities, but it felt like a networking for professionals thing to me, and since I’m no longer looking for work probably won’t pursue it. Also: expensive as hell. A friend is a Kiwanis Club member; maybe I’ll ask for a invite to one of their meetings.

Our daughter Polly is moving out of her boyfriend’s condo and into an apartment of her own. Today’s the day, I think. She called to ask if our truck and trailer are available Saturday. I’ll offer to do the driving, but my heavy lifting days are over so will have to settle for watching Polly and Joel do all the work.

Just got an email from the library. The next Jack Reacher novel is waiting to be picked up. The last one was a disappointment; if this one is too I may try re-reading John D. MacDonald’s Travis McGee novels. Of course I’m open to recommendations, so if you have some please leave them in the comments.

I’m having a love/hate relationship with this home alone thing. Donna comes home Sunday. The dogs and I are looking forward to her return.

One thought on “Home Alone”