“We are all part machine, Kaaro. Your phone is a polymer under the skin of your hand. You have a locator chip in your head.”
—Tade Thompson, Rosewater 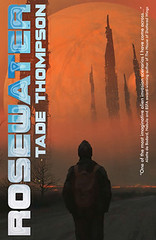 A Goodreads friend said this about “Rosewater”:

“This book is one of those discoveries that not only is enjoyable for itself; it’s good enough to make me feel overall cheerily optimistic about the future of science fiction writing. Of course, this is not to be confused with ‘feeling cheery about the future;’ the effect here is quite the opposite, in fact.”

With an endorsement like that, I had to read it. It was everything she said, and more. As I read, I found myself as excited as I had been, decades ago, when I first read “The Fifth Head of Cerberus” by an up & comer named Gene Wolfe, or later, when I discovered the work of William Gibson.

“Rosewater” tells a hell of a story. Thompson says his science fiction stories are “about people, with incidental science,” but neither the people nor the science is incidental in “Rosewater.” Both are central to his complex first contact/alien invasion novel.

I particularly liked the main character Kaaro’s flashbacks to 2055 and his first encounters with the super-secret S45, the xenosphere, Femi, Wormwood, and Bicycle Girl. As other readers reported doing, I occasionally paged back to chapter heads to remind myself which timeline I was in, 2055 or 2066, but it was not bothersome: in fact, the very minor effort this entailed drew me even more into the story and enhanced my understanding of the world Thompson built.

Thompson is a master of introducing shocking plot elements through throwaway one-liners: when you run across one like “When America went dark,” your hair wants to stand on end. I suspect most Western readers will know enough of present-day Nigeria to be somewhat frightened of it; for sure I have heard of “necklacing,” and was perversely happy Thomas didn’t paint a prettier picture of the future Nigeria. Nigeria, along with the cast of characters who inhabit Lagos and Rosewater, is gritty and entirely believable.

There’s not a hint of the didactic in “Rosewater.” Thompson is a master of showing, of putting you in the story. “Rosewater” is brilliant, and I agree with my friend: the future of SF is assured. 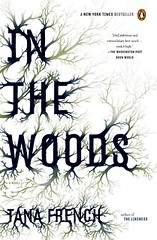 In the Woods (Dublin Murder Squad #1)
by Tana French

“In the Woods” is my first Tana French novel. I bought the ebook version after reading a glowing review in The New Yorker. I started it in November, then put it aside to read two Lee Child Jack Reacher paperbacks. The contrast between man of action Jack Reacher and the brooding and complex detective Rob Ryan could not have been more stark, and I had to cool down before I could start reading “In the Woods” again. Which is to say that after Jack Reacher, I had little patience for Rob Ryan’s tentativeness, self-doubt, and unmanly fears.

But the weeks went by and eventually I picked up “In the Woods” again. To my surprise, Rob (the Dublin Murder Squad detective), in addition to becoming even more tentative, self-doubting, and fearful, revealed himself to be a major asshole as well, losing any claim he might have had on my sympathy. I was surprised the novel went in that direction. That’s the problem with reading Jack Reacher thrillers. You expect characters to stay the same and for mysteries to be resolved. Which of course is not at all how things actually work, as Tana French clearly understands.

I’m dangerously close to spoiler territory. The Dublin Murder Squad solves a particularly nasty crime. Rob Ryan falls far short of resolving an earlier and possibly related crime, and screws up professional relationships and friendships along the way. Real life sucks. I may need a third dose of Jack Reacher to clear out my baffles.

I must say, though, Tana French is a very gifted writer. Although I didn’t like the lead character in this novel, I will definitely read more of her fiction.

Jack Reacher thrillers are, three books in, much of a muchness. Addictive and fun to read, but I have nothing to add to my review of the first Jack Reacher novel, which I’ll repeat here:

“I read a long article about Lee Child and the Jack Reacher series in a recent New Yorker. Since the same magazine had previously introduced me such brilliant writers as Patrick O’Brian and Tana French, I decided to read a Jack Reacher book.

“Reader, I inhaled it. That’s not to say Lee Child is a brilliant writer. He is what most of us would call a hack. But how refreshing it is, once in a while, to read a first-person, reasonably well-plotted and action-filled thriller where the bad guys get what’s coming to them and justice prevails.

“I was reminded of John D. MacDonald’s Travis McGee novels, which I inhaled in the 1980s. You’ll get hard-boiled detective tropes, not a little Sherlock Holmes, plenty of Hulk. You can criticize the plot for being contrived and unlikely, but you can say the same thing about most action-hero thrillers. I like Lee Child’s plain language and direct writing style. The pages turn almost of themselves.” 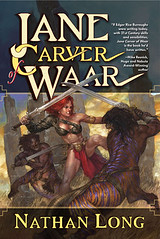 As a kid I shunned Edgar Rice Burroughs’ series of Martian adventure books. They struck me as mere swashbuckling fantasy, not science fiction, and I was a bit of a snob about science fiction. I guess I still am, but boy, was “Jane Carver of Waar” a fun read!

Which, I guess, means one doesn’t have to have a grounding in Burroughs’ John Carter books to appreciate what Nathan Long is doing with Jane Carver. She’s a gas, very like some biker chicks I know in real life, and I’d want her at my side in a Hells Angels bar.

If you’re ready for a break from serious reading but don’t want your intelligence insulted (i.e., if you’re also between Jack Reacher novels), you could do worse. And who knows, a visit to Waar might help you keep your sanity in the Trump era. 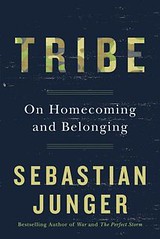 Tribe: On Homecoming and Belonging
by Sebastian Junger

A longish essay/short book on what binds men together in societies. I say “men” because Junger here writes mostly of men and war. My heart is with him when it comes to the military experience, but I don’t think it’s as binding an experience as he does: I want to believe young men and women leave the military better than they were, having shared tough conditions and common goals with people from different cultures, races, sexes, etc … but then I look at some of the KKK/white militia types coming out of today’s military (and the great racial tensions our military experienced during the Vietnam War) and I think, hey, wait a minute there Junger, do you believe this to be true, or, like me, do you wish it to be true?

One of the problems with not footnoting your work (Junger does not, but instead lists sources at the back of the book) is that it can be hard to know when the author is blowing smoke or presenting fact. Junger goes deep into woo territory with tales of white settlers running away to join Indian tribes in the early days of this country. Yes, it happened, but Junger oversells his point, presenting these defections almost as everyday occurrences, undermining his credibility.

Still, he’s on to something: times of war and hardship do unify people, and there is little to unify Americans today. This tallies with my own observations. I also related to Junger’s conservative streak, which comes out strongly in his discussion of “disabled” vets milking the VA system for higher disability ratings and pay: something I saw up close and personal during the two years I worked for the VA Hospital in Tucson. Perhaps if the military was better integrated with society as a whole, there’d be less of this … but then again, thanks to the draft the military was far more integrated with society during the Vietnam War than it is now, and yet Vietnam vets had just as hard a time reintegrating into society as soldiers do today.

Overall: interesting reading from a damn good war correspondent, but his premises and conclusions are debatable. 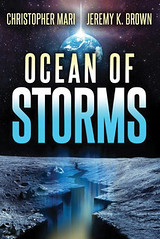 But first, let’s have a drink. Sorry, that’s a spoiler.

Fans of serious science fiction will find this novel laughable. Newcomers to the genre will enjoy it more. Young adult readers may find it appealing. But if you grew up on science fiction, as I did, you’ll find yourself wondering if “Ocean of Storms” is worth the bother.

And that’s a good question: why did I bother to finish it? Because its one redeeming quality, apart from the interesting central idea, is its Perils of Pauline format, with a cliff-hanger at the end of every short chapter. As Don Draper would say, you can’t eat just one.

Books I did not finish …

After two chapters I grew weary of the author’s heavy hand. I did not like the omniscient narrator point of view; I did not like the unrealistic dialog, I did not like being lectured to about economics. There are echoes of Christopher Buckley’s equally heavy-handed satirical novels, only without the humor. The book did not grip; I did not care about the Mandibles or their fates.

There’s a promising science fiction time travel idea here, but the narration was too fussily baroque for my taste, and the plot promised to be overly complex. Will you hate me if I say it reminded me of BBC’s “Sherlock” (the Benedict Cumberbatch/Martin Freeman one), a series which got so wrapped up in itself it lost its way? I gave up after three chapters.