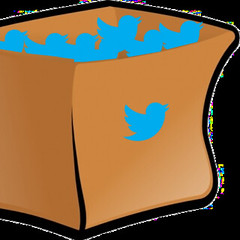 The unelected president-elect is not the only prominent politician with a Twitter account, but he’s the only one I can think of whose tweets consistently make the news.

Boeing responded with some tweets of its own, pointing out that the aircraft weren’t going to cost anywhere near that. Others responded by pointing out that Congress is in charge of the pursestrings, and that military contracts are not subject to cancellation on a presidential whim. A few others pointed out that Trump is not the president, and won’t be until unauguration* day, January 20, 2017.

When I walked in the door of Anytime Fitness this morning, the wall monitors were set to Fox News, where a reporter was justifying Trump’s tweet by claiming “everyone knows” these airplanes will cost a lot more than Boeing says they will. Fortunately the volume was turned down and the stationary bicycle was far enough away from the TVs that once I got on it I could no longer hear the smack of media lips kissing Trump’s behind.

Much ado about nothing? I’ve always looked on Trump’s tweets as his way of blowing off steam, a window to a childish, vindictive soul. Maybe he’ll follow through on his threats once he’s president, maybe not. But a lot of prominent people, in and out of the media, take his tweets seriously. In their eyes, if Trump says cancel the contract, Boeing can kiss that order goodbye. Trump’s tweets are often reported on as if they’re executive orders, or at the very minimum predictions of presidential policies to come. 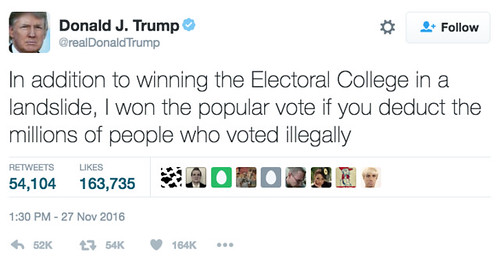 As of today, 2.6 million more Americans voted for Hillary Clinton than for Donald Trump. Trump’s claim that anyone, let alone millions, voted illegally is entirely false. But members of Trump’s transition team swear in unison he won both the electoral and popular vote. Right-wing media repeat the claim verbatim. Mainstream media uselessly straddles the fence. Republican leaders in Congress, too chicken to come right out and endorse Trump’s lie, pretend they simply don’t know if millions voted illegally. Trump voters, I think it’s safe to say, believe their man no matter what he says.

So is it true, then, that Republicans make their own reality? And if that’s true, then maybe Trump’s tweets really ought to be taken seriously. We can debunk Trump’s lies and make fun of his childish vendettas all day long, but if half of America tunes us out, if the media goes on blithely repeating Trump’s lies and taking his Twitter meltdowns seriously, if Congressional leaders shrug their shoulders and say “we just don’t know,” exactly what difference are we making? Who are we preaching to?

We can bitch and complain on social media all day long, but our tweets are as air compared to Trump’s, and he’s gonna win that war. So what can we do? Robert Reich has some suggestions for average American citizens (remember us, the ones who voted for Hillary Clinton?), things we can do to oppose Trump during his first 100 days in office, the “honeymoon” period when new presidents historically make the most impactful changes of their terms. I’m not a big Robert Reich fan, but when he says there might be a way to fight back effectively, I’m willing to listen.

* When a president-elect wasn’t actually elected by the American people (who overwhelmingly voted for the other candidate), I think it’s fair to refer to him as the “unelected president-elect,” and to January 20, 2017 as “unauguration” day.