Haboob (and Other Words You Can’t Say) 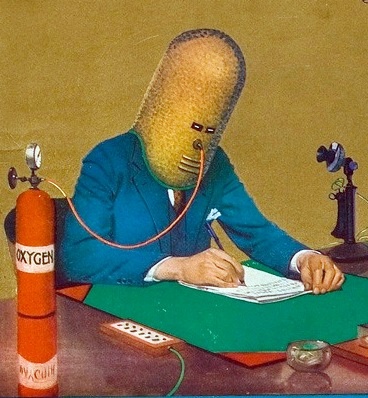 Hey look, I found a portrait of Grandpa Woodford, the first blogger! Gramps, I’m proud to follow in your footsteps.  And with that …

It’s been amusing watching news personalities struggle with the story of Rick Perry’s hunting camp, the quaintly-named “Niggerhead.”  No one … save rival candidate Herman Cain … seemed willing to say the name out loud.  The icing on the cake was watching Jon Stewart and Stephen Colbert dance around the name.  Stewart used one of his black correspondents, Wyatt Cenec, to deliver a rant about all the places in the USA that still have racist names; Colbert inserted a one-second clip of Herman Cain saying “Niggerhead” every time he wanted to use the word.  The common denominator here?  Only black people are allowed to say the n-word.  Hmm … I wish certain white folks I know could get that through their noggins.

Speaking of racist buffoons, how about that Hank Williams Jr?  They tell us he goes by the nickname “Bocephus.”  I lived in the Deep South for a few months in the 1970s.  Back then, in that part of the country, you’d see Bocephus bumper stickers on the backs of pickup trucks.  The more inbred-looking the driver, the more likely he’d have one of those stickers.  I never knew what it meant (was Bocephus the name of some confederate general’s horse?), but over time I came to associate the name with everything I hated and feared about the South: Jim Crow, ignorance, intolerance.   I hadn’t seen or heard the name Bocephus for decades and was shocked, upon hearing it again, to learn it still packs a punch: the second I heard someone refer to Hank Williams Jr. as Bocephus I flashed on the image of a good ol’ boy in a pickup, cold beer in hand and a half-empty six-pack on the seat, a pit bull and some homo-draggin’ chains back in the bed, rolling down some backwoods two-lane road on his way to a lynching.

But one must to be fair.  It’s not just the South.  It’s Arizona too.  Remember how upset the cactus conservatives got over TV meteorologists calling dust storms haboobs? Well, there have been at least three big Arizona haboobs since then.  National meteorologists on network news and the Weather Channel still call ’em haboobs, but Arizona TV weatherpersons?  The word is now taboo.  What are they afraid of?  Oh, right … Republican reaction (which in Arizona translates into “racist thugs with guns pounding on your studio door”).

Haboobs … dust storms if you insist … get the blame for multi-vehicle pileups on a dangerous stretch of Interstate 10 between Tucson and Phoenix.  I hope I’m wrong, but it seems like these accidents are happening more frequently of late.  Driving to or from Phoenix has turned into an updated Shirley Jackson story: you might as well buy a ticket in a random death lottery.

Lottery winners are randomly selected along a short stretch of I-10 near Picacho Peak and Casa Grande, a moonscape of flat sandy desert with nothing to break the wind.  This section of the interstate has recently been widened to three lanes in each direction, but that hasn’t relieved the congestion much.  If anything, it’s as congested as before … and 10-15 mph faster.  When a haboob springs up, visibility drops to zero and the pileups begin.  If you don’t slow down you’ll rear-end the driver who does.  If you do slow down you’ll be rear-ended by the driver who doesn’t.  I dread driving that section of road … as should anyone with an ounce of sense.

But the biggest source of my fear isn’t the haboob.  It’s the proliferation of heavy truck traffic.  Notice all the big rigs in the photo above?  That’s typical of I-10 traffic, any hour of the day or night.  I-10 between El Paso and Los Angeles is one of the major commercial truck corridors in the nation.  When I drive to or from Phoenix, I often find myself completely sandwiched by tractor-trailers: one in the lane to my right, one in the lane to my left, one directly in front of me, one coming up fast behind.  Everyone’s barreling along at 75 mph, you can’t see shit, and you have to maintain perfect formation if you don’t want to wind up as road toothpaste beneath those 18 wheels.  It’s scary, it’s tense, and it’s dangerous.

I know someone in the National Highway Traffic Safety Administration tracks accidents involving heavy trucks and passenger cars.  I suspect the NHTSA keeps a tight lid on that information, and that’s it’s worse than they’re letting on.  There are a hell of a lot of accidents either caused by, or aggravated by, heavy commercial trucks.  I know first hand, from my short time in the industry, how many commercial drivers are pressured into cheating on maximum driving time and are essentially … or literally … asleep at the wheel.  Most accidents, to be sure, are caused by idiot car drivers, but the mix of huge heavy trucks and small lightweight cars makes those accidents far more deadly.  Further aggravating things in Arizona, there are no lane restrictions for heavy trucks.

I seriously think it’s time to consider building a separate road network for commercial traffic.  If I were king I’d start with high-volume corridors like Tucson-Phoenix and San Diego-Los Angeles, but eventually I’d get around to the entire interstate highway system.  One for cars, one for trucks.  Stimulus?  Check.  Jobs?  Check.  Infrastructure?  Check.  Safety?  Check.  It’s a win-win-win!

Listen, y’all ever get sick of this broken paralyzed do-nothing two-party system we’re stuck with and decide to have a king instead, I’m available.  And I have your best interests at heart.