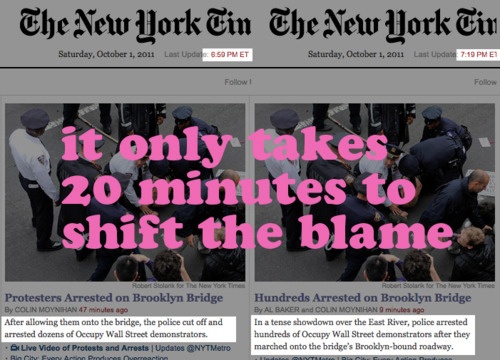 Hard to read, I know, so here’s what the highlighted sections say:

After allowing them onto the bridge, the police cut off and arrested dozens of Occupy Wall Street demonstrators.

In a tense showdown over the East River, police arrested hundreds of Occupy Wall Street demonstrators after they marched onto the bridge’s Brooklyn-bound roadway.

Gee, who do you supposed called the publisher of the New York Times at 7:00PM Eastern? The police commissioner … or the CEO of Goldman Sachs?

Here’s the video (including the by-now-famous arrest of the girl in the cap, starting at about 7:25):

The girl in the cap, you ask? Contrary to earlier reports (mostly posted to Twitter by other demonstrators on the bridge as events were unfolding), she wasn’t 13 or 14. She’s 18, and her name is Katie. I think she’s about to become the face of a movement: 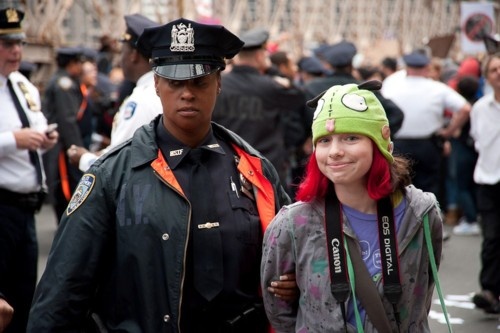 I wonder, do you think NPR has touched this story yet?