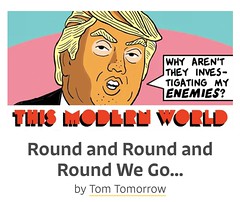 I follow This Modern World cartoonist Tom Tomorrow on Daily Kos and Twitter. His work stays relevant, no matter how old, and periodically he’ll recycle a panel from the archives.

Unlike Mr. Tomorrow, I work under my actual name. Like Mr. Tomorrow, I too recycle work from my archives. When it comes to Trump, everything I wrote from election day in 2016 on has come true in spades, and then some. So like Mr. Tomorrow, I’m recycling a post from eleven years ago. It’s about corruption, written long before Trump. But as you’ll see, I recycled the post once before, just a few months into the Trump administration, when it had already become clear the entire Republican Party, the media, and the majority of the American people were prepared to ignore corruption and pretend everything is normal.

And here we are today, as Trump’s acting chief of staff announces that world leaders will stay at Trump’s Doral golf resort in Florida for the upcoming G7 meeting, another in a long string of open assaults on the Constitution’s emoluments clause, and although there’s plenty of noise about it in the media at the moment, I bet by next week coverage will have moved on to some other outrage.

Why Congressional Democrats conducting the impeachment inquiry aren’t focusing on Trump’s repeated violations of the Constitutional prohibition against using the office of the presidency for self-enrichment … actual, provable, criminal behavior … is beyond me. It makes me think they really aren’t interested in impeachment, and that they’re going to slow roll the process into the 2020 presidential election and beyond, and moreover that as a society we’ve given up on fighting corruption. Which puts us, as I pointed out in my update two years ago, on the same level as Afghanistan or Zimbabwe, never mind our vaunted rhetoric about democracy and the rule of law.

Here’s the update from October 2017, followed by the original post from September 2008:

(Update: 10/24/17): Last night I read about the awarding of a no-bid contract to restore Puerto Rico’s power grid (awarded to a two-year-old company that had two employees when Hurricane Maria hit the PR just over a month ago, and is situated in Interior Secretary Zinke’s home town), and started thinking about corruption.

My initial thought was that the kind of frank corruption and cashing-in we’re seeing with Trump and his administration is a new thing, but then I remembered George W Bush and Dick Cheney and the rampant corruption involving no-bid contracts in Iraq after we invaded in 2003, and then I remembered that a little over 100 years ago it was normal to pay a bribe to get a government job, and then I remembered that under current House and Senate rules lobbyists are legally able to bribe members of Congress, and then … well, then I started missing the days when I could open a bottle of scotch and quit remembering things.

Probably a coincidence, but this morning a reader commented on a post I wrote on September 19, 2008, and I decided to move it back up to the top of the blog, because here we are as Trump & company dismantle even the polite white lie that this country adheres to higher principles than Afghanistan or Zimbabwe, noshing on bloody chunks of baby seal and not caring what anyone thinks, and we’re averting our eyes and doing nothing about it.

This brilliant comment, posted by a reader named Wesley to a thread on Making Light, encapsulates the current state of our ongoing culture war:

There was a short story a few years ago by Howard Waldrop, called “Calling Your Name.” It ended up in a couple of Best-of-the-Year anthologies. There’s this guy, see, and after getting a shock from a badly wired power tool he learns Richard Nixon was never president. And then it turns out the Beatles never got together. And then JFK turns up alive, married to Marilyn Monroe. And then even members of his family have different names. Little bits of his reality keep shifting away from him.

I feel like the guy in the story. Except instead of history, it’s civilization that’s shifting. It seems like every few days I wake up and find another thing that was once beyond the pale is now normal, and considered unremarkable by everyone except some blogs somewhere. The lies are a little more blatant. The standards of behavior and intellect we expect from our leaders are a little lower. And hardly anyone cares, or even notices. Maybe I’m misremembering, but twenty years ago, before George W. Bush lowered the bar, wouldn’t somebody like Sarah Palin… who ran Alaska by filling important positions with old unqualified high school buddies and subadolescent sycophants who could in cold blood email things like “YOU ARE SO AWESOME” … wouldn’t someone like this have been a national laughingstock?

I keep expecting, someday, to wake up and on my way to work pass a handcart selling baby seals on a stick, freshly clubbed, skewered while still writhing. And everyone will be like, where have you been, dude? Everybody’s always eaten live baby seals for breakfast. It’s how things are, in this great country of ours! And then they will splash me with the excess blood, laugh terrible shrieking laughs, and wander off to relieve themselves in the nearest park.

From now on, whenever I hear Rush Limbaugh or see Bill O’Reilly (which I’ll continue to do as infrequently as possible), I’ll picture them gnawing on freshly clubbed baby seal.

The title of this entry, by the way, is a line from a truly awful song I learned in my fighter pilot days.  Don’t go below the fold if you don’t want to read it!

Way up north where it is cold, you know they ain’t got gold
They all make their living from the seal skins they’ve sold.
Me I like the killing, because it’s so fulfilling
And I hate to see a baby seal grow old.

Chorus:
You don’t bludgeon a seal ’cause you want a meal
You do it cause you want to hear those little suckers squeal.
You hit ’em on the head, and you do it just for kicks
And you poke out their eyes with your eye-pokin’ sticks.
(Two — Three — Four)

My daddy was a little mean, my mama was a bit obscene,
Maybe that’s the reason for the way that I feel.
You might not believe me, but my woman wants to leave me
So I guess I’ll take it out on a baby seal.

The liberals want to lock me up because I kill the seal pups
And tie their fur up into little bales.
I know that it won’t be long ’til all the baby seals are gone
So I guess I’ll just start wiping out the whales.

Slice ’em, dice ’em, roto-till ’em, chop ’em up or just plain kill ’em,
Their fur comes off with just one easy peel (RIP, RIP, RIP)
People, people don’t you cry cause I know that when I die
I’ll be coming back as a baby seal.