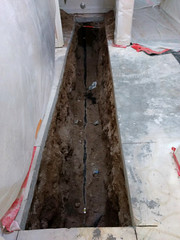 Our friend Mary Anne’s floor has been pulled out from under her. Her house, like ours, sits on a concrete pad. A pipe ruptured down below. Contractors ripped out her flooring, broke up the concrete with a jackhammer, and dug a trench through the middle of the house. She called Donna yesterday and asked if she could come over for dinner tonight … she can’t cook with her house in the state it’s in, and (perhaps more importantly) she could use some moral support. Of course we said yes, and I’m in charge of dinner. I’m making beef Bourguignon … not the full-scale Julia Child production, but an easier to prepare and just as tasty version featured on my cooking blog … and we’ll do our best to cheer her up.

Oh, and get this … her homeowner’s insurance company says the pipe repair isn’t covered. How convenient for them!

As for the state of our own house, we’ve started moving things out of the kitchen cabinets and into the dining and living rooms in preparation for the upcoming remodeling project, so there’ll be no formal sit-down dinner tonight. We’re eating on trays. Full disclosure: we eat on trays every night. We’ve fallen into slovenly ways in our golden years. And I love it. When they came out with TV trays in the 1950s, I knew even as a kid the future had arrived, and that it was glorious. Mary Anne and I like science fiction, so we’ll stream some Firefly with our dinner, and best of all Donna can’t complain about it because company!

One can’t help but notice that the Boy Emperor backs down in the face of harsh criticism, as he did yesterday on his self-serving attempt to host the next G7 summit at his Doral resort in Miami. But one cannot help but also notice that he always circles back once the heat’s died down, and don’t think for a minute he’s through trying to inject cash into Doral with future government business. Who knows, maybe USAF cargo jets on international routes will start diverting into Miami International to get their tanks topped off, with crews staying overnight at Trump’s resort. After all, it is near the airport!

Earlier this weekend he called the prime minister of Italy, Sergio Matarella, “President Mozarella,” and today he called his own secretary of defense, Mark Esper, “Mark Esperanto.” This would be endearing if it were anyone but Trump. Rick Perry, maybe. We’d laugh. I don’t know where I’m going with this thought, actually. Won’t someone do something about this human-shaped kidney stone lodged in the body politic? When will it pass, and how much damage will it do on its way out?

Normally, when I go to a car show, I put up a stand-alone photoblog. But I’m becoming less enamored with Tucson’s first big show of the season, the annual Tucson Classics Car Show held on the grounds of the Gregory School, so I’m incorporating some photos into this post instead.

What’s my problem? It’s the crowds, mostly. I’m not agoraphobic, but I do dislike being jostled by strangers, and felt squeezed on all sides yesterday. Donna rode over with me on the motorcycle, which was a treat. If she hadn’t been there I probably wouldn’t have lasted half an hour. As it was, we ogled the cars for a hour and a half. Here’s my yearly panorama from the bleachers:

As always, hot rods, muscle cars, Bulgemobiles from the 1950s, a few genuine antiques. Quite a few were cars I photographed in past years, so I tried to pick out ones that were new to me. And of course I also tried to get the reluctantly-photographed Donna to hold still for a couple.

There are a few more in my St Gregory Car Show 2019 album on Flickr. Click if you dare (c’mon, you know you wanna).