It being my birth month and all, I decided to energize my batteries with a motorcycle cross-country. Here I am leaving our home in Tucson Thursday morning, October 10th: 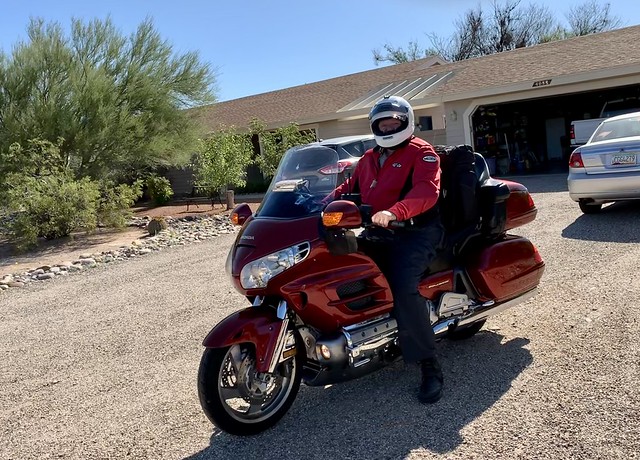 Donna came out to say goodbye and take my photo. Polly emerged from hiding as well. My dachshund Mister B was too upset to participate in the sendoff, and according to Donna stayed in a funk the entire time I was away … only four days, but to a loving dog it might as well have been forever. The first night Donna sent a photo of Mister B looking out the front window, waiting for me to pull back into the driveway. The next night she sent a photo of him waiting on my favorite chair (the one by the same window), looking for all the world like one of those faithful dogs who guard their departed masters’ graves.

Heartbreaking. I almost turned around and rode home after she sent the first one. By the time she sent the second, I was having too good a time.

I rode from Tucson to Flagstaff on the first day and registered at the military recreation facility at Fort Tuthill, just south of Flagstaff. Our son Gregory rode his speedy BMW down from Las Vegas and stayed there with me that night. The rec center is operated by Luke AFB in Phoenix, and consists of a hotel, several log cabins and A-frames, and a campground, all surrounded by pine trees. Here’s the hotel lobby, where I waited for Greg to arrive. Not bad for government issue.

When Greg got in we rode into town for dinner, then crashed early in preparation for Friday’s long ride north through the Navaho Nation and into Utah. Good thing, too, because Friday’s ride turned out to be even longer than we thought it would be. Our destination was the small town of Torrey by Capitol Reef National Park, a place Gregory chose because it anchors the eastern end of a legendary-in-the-motorcycling-community scenic road, Utah Highway 12. We rode straight from Flagstaff up to Page, stopping only briefly for gas, and on into Utah, then zig-zagged west and north on US 89 to Kanab and Panguitch, switching over to Utah 62 and 24 for more zigging and zagging, finally pulling into Torrey just before sunset. The motel was out of the 1940s and had its own restaurant … thank goodness for that because neither one of us felt like getting back on the bikes to ride into town.

As in Flagstaff the night before, the temperature in Torrey dropped into single digits overnight, and even though we had at least as long a ride Saturday as on Friday, we couldn’t leave until the temperature climbed back above freezing, just before 10 AM. It was still 35°F when we climbed on the bikes Saturday and set out west on Highway 12, fortified by breakfast at the motel’s cafe.

There must be some drama in every road trip, and the drama this time was Gregory’s. He’d put a pair of cheap Pirellis on his Beemer a while ago, knowing they’d last only 3,000-4,000 miles. He had a new set of Dunlops in his garage for when the Pirellis wore out, but chose to squeeze just one more wafer-thin trip out of the cheapos. He chose poorly. When he post-flighted his bike Friday night in Torrey, he discovered that not only was the tread on the rear tire gone, cords were beginning to show. I thought the tire would get him home to Las Vegas, but he worried and fretted and sometime in the middle of the night came up with a plan.

Which was to ride Highway 12 on Saturday as originally intended (after all, that section of road was the planned high point of our trip), then cut through Zion National Park to the only motorcycle shop between Torrey and Las Vegas, the Harley dealership in Hurricane, Utah. The GPS said we’d arrive there around 1:30 PM, and Greg’s wife Beth … a saint if ever there was one … would load the new rear tire and some tools in their car and drive 140 miles to meet us in Hurricane. Greg also called ahead to the Harley dealership to let them know we were coming.

The GPS lied, and we should have known because it had lied about Friday’s ride too. It took us nine hours to get to the Harley dealership near Zion, and another two hours to get to our final Saturday destination, Las Vegas. More on that in a minute.

Tell you what, though, it was a beautiful ride. Utah Highway 12 is a national treasure, especially around the Grand Staircase-Escalante National Monument, and I only wish I’d set up my GoPro before we left that morning. It was spectacular, but with the pressure to get to the motorcycle shop on the west side of the state before it closed for the day, we barely had time to stop and take in the views.

But as you can see, I was able to take a couple of still photos along the way. There was a marathon on Hwy 12 between Escalante and Cannonville that morning, and had we left earlier we’d have been in the middle of it and wound up just as late. As it was, we caught up with the stragglers near mile 20 and didn’t even have to slow down. Deer and cattle were everywhere, though, and we rode with our heads up and on full alert lest we run into one. Deer, judging by the number of their dead colleagues along the sides of the road, aren’t very sensible about cars. The cattle, save for one young one who bolted onto the road in front of me, seemed more used to traffic and stayed to the shoulders. The scenery was spectacular all the way, and I really want to go back and ride that road some day when there’s no pressure to be anywhere.

We got to Mount Carmel Junction, two thirds of the way to the Harley dealership, about 1:30 PM, an hour and a half later than we thought we’d be. We’d originally planned to join up with a couple of Greg’s Las Vegas riding buddies there for the ride through Zion. We figured they’d be long gone, but hey, they waited for us and you can see them behind me in one of the photos above.

There wasn’t time for Greg and I to stop for lunch because it was beginning to look dicey whether we’d make it to the Harley place before closing, but while we were gassing up I clamped the GoPro to the top of my helmet so I could at least tape the ride through Zion. Where’s the video, you ask? Well, in the rush I didn’t check how the GoPro was aimed, and it was pointed too far down. I’ve got a lot of great video of my handlebars and speedometer, but the scenery cuts off at eye level. Here are a couple of screen grabs from the video to show you what I’m talking about. You’ll have to imagine the jagged and colorful sandstone peaks towering above us on all sides. Oh, and a couple of photos from the Harley dealership (yes, we made it in time).

The ride through Zion National Park was spectacular, but the road was clogged with tourists (no tourist, no tourist, you’re the tourist!) and even after we were out of the park on the west side, heavy camper and RV traffic continued to impede our progress, but by golly we rolled into the Harley place at 4:30 PM, half an hour before closing. Beth was there, having patiently waited for us with the new tire and some tools. Greg took off his rear wheel and the Harley mechanic rolled it inside to dismount the old tire and mount the new one. Beth drove back to Las Vegas, and the four of us (Greg’s two buddies stayed with us through all this, good guys that they are) got on I-15 for a 90 mph ride back to Sin City about an hour later. Greg and I pulled into his garage around 7 PM, and Beth had takeout Chinese waiting for us.

So that was Saturday. Now that Gregory had decent rubber on his bike again, we were able to go for a relaxed putt into the mountains north of Las Vegas on Sunday, along with two fellow members of the Knuckledraggers Hash House Harrier Riding Club (Las Vegas Chapter), Jim and Jeff. Greg is a LV Knuckledragger as well, and I’m the grand master of the Baja Arizona chapter. We rode up to the helipad at the top of Lee Canyon for a traditional hash beer check, then on to the lodge at Mount Charleston, where we had lunch.

I used a different mount for the GoPro on Sunday’s ride, which resulted in far better videos, but I’m still editing them and will have to post some short clips later. Meanwhile, here are some photos from Sunday with the Knuckledraggers.

Sunday night was a family night with Greg, Beth, and our grandson Quentin. We watched El Camino, the post-Breaking Bad movie about Jesse Pinkman, and Monday morning I left for the long solo ride back to Tucson, a route I’ve traveled many many times by motorcycle and car. Happy to say the ride home was uneventful, and should probably note here that not one cager tried to kill me this entire trip. Which makes it above average. Add perfect weather and (tourists in Zion excepted) no traffic, and it was close to perfect. My batteries are recharged.

I mentioned in an earlier post that I’ve had a long recovery from my second knee replacement in July 2018, and had been a little concerned about my ability to hang in there on a long ride. Yes, the knee’s still full of scar tissue and stiff, but I can ride and by alternating between the regular footpegs and the highway pegs, I’m good for back-to-back days in the saddle. Whew, that’s a relief! Oh, and the sore tooth? It didn’t bother me on the trip, and it hasn’t flared up since. Another relief, although probably only a temporary one.

I hope you didn’t think I had forgotten about poor Mister B. I thought about him every day I was away, and when I pulled into the garage Monday afternoon, Donna was there holding him. He jumped from her arms to mine before I could even get off the motorcycle, and Donna took this photo of our reunion. Do we deserve these loving devoted faithful friends? No, we do not.

p.s. There are an abundance of photos in this post, but if you want to see more, I have a trip album on Flickr. Just click here to see it.