This one’s from the Air-Minded archive, originally published in December 2004.

When I flew fighters, my tactical callsign was Skid. How did I get a name like that? Simple: I blew a tire. But enough about my sex life!

Tac callsigns, as often as not, are based on screw-ups, minor mishaps, and embarrassing personal traits. I flew with guys named Crash, Ripple, Mumbles, Buick, and Tiny Bubbles. Crash crashed (a car, thank goodness, not a jet); Ripple accidentally fired off two live Sidewinders on a training exercise; Mumbles really did mumble; Buick got drunk and puked; TB fell in love with a Korean bar girl who milked him for hundreds of dollars’ worth of champagne cocktails. You messed up, you got a tac callsign.

When I was first assigned to the F-15 I was part of a group of new Eagle pilots destined for a USAF squadron in the Netherlands. We trained together, first at Luke AFB in Phoenix, Arizona, then at Langley AFB in Hampton, Virginia. The instructor pilots who taught us how to fly the Eagle had tac callsigns, but they made it clear to us we were not to name ourselves — our betters would bestow names on us in time, when we earned them. A few guys earned names at Luke and Langley, but the rest of us managed to stay out of trouble until we got to the Netherlands. 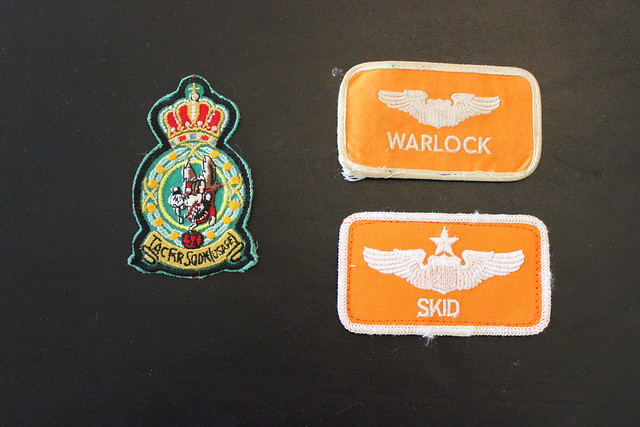 I was Warlock for a few months, for want of anything better. And then Prince Claus dropped by. Claus was the husband of Princess Beatrix, later to become Queen Beatrix. Soesterberg Air Base wasn’t far from the palace, and members of the royal family would visit from time to time. This time it was Prince Claus, and I happened to be one of two pilots on five-minute air defense alert that day. We figured we’d get a practice scramble during the royal visit, and we did, and off we went in full afterburner. An hour later we were back on the ground, rolling out on the runway. I had landed first and was headed for the turnoff at the far end of the runway when I suddenly remembered the last taxiway was closed for resurfacing, and that we were supposed to turn off at the one I was just about to pass. I stomped on the brakes, instantly blew both main tires, and lurched to a stop. The Dutch tower controller made a terse announcement: “Alpha Kilo Zero Two, you have fouled the duty.” The pilot rolling out behind me was able to stop safely, and there we sat, fouling the duty.

Lo and behold, Prince Claus was still on base, and up he rolled in a staff car with my commander, Colonel Al Pruden, who flew as Wildcat. By now I’d shut down the engines and opened the canopy, and as I sat there, sixteen feet above my shredded tires, Wildcat and the prince walked around the jet, surveying the carnage. Finally Wildcat looked up and said, “How do you like your new tac callsign, Skid?”

So that’s how I earned the name I flew under for the rest of my USAF career. Indeed, Skid followed me into retirement, when I went to work as a civilian contractor to the USAF, training fighter pilots in cockpit resource management, a flying safety methodology.

I’m not the only Skid. There are several others, tire-blowers to a man (and one woman, who when I met her was an A-10 pilot at Pope AFB in North Carolina) — with one exception.

As a CRM instructor I was always on the road, traveling to USAF bases in the USA and across the Pacific. I particularly loved going to Nellis AFB in Las Vegas, Nevada — we were stationed there before I retired, our son and his family live in Vegas, and we have several friends in town — so whenever Nellis requested CRM training, I volunteered. On my last CRM trip to Nellis, about four years ago, I was scheduled to train the USAF Aerial Demonstration Squadron, the Thunderbirds. The Thunderbirds are based at Nellis; not only do they fly together, they take their ground training together, and I had the entire team in my classroom.

I always started training sessions by introducing myself as Skid and telling that stupid joke about my sex life. This time, though, as I wrote my tac callsign on the whiteboard, I heard a couple of chuckles, and when I turned around to face the group, there was a Thunderbird pilot in the front row wearing a name tag that said Skid. I said “Hey, I bet you know how I got my tac callsign.” And he said, “Did you shit your pants in the centrifuge too?”

That’s such a good story I think I’ll end it right there!