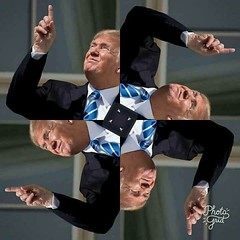 With Hurricane Harvey due to strike a heavily-populated part of the Texas Gulf Coast later tonight, potentially dumping rain that will be measured in feet, not inches, it’ll be interesting to see what manner of leadership this White House is capable of.

Has it struck anyone else that while Trump constantly lays into the New York Times and CNN as purveyors of “fake news,” he’s said not a peep about the MSNBC hosts who criticize him and are hotly pursuing the Russia investigation story, specifically Rachel Maddow, Lawrence O’Donnell, Christoper Hayes, and Joy Reid? What’s up with that?

Speaking of water damage, we’re waiting for the home repair guys, due sometime this morning. A couple of weeks ago the air conditioner condensation drain got plugged with sludge and water soaked into the carpet, baseboards, and parts of the drywall in our home office. The damage was appraised, if that’s the right word, and our homeowner’s insurance wrote a check to cover (minus our deductible) repairs and new carpet. We’re going to have wood laminate flooring put in instead, which should cost about the same as new carpet.

It’s time I had an I Love Me wall, so once the repairs are done I’m going to put up the plaques, awards, and diplomas we rediscovered when we emptied out the home office closet. Everything should be done in time for our October visitors, friends detouring to Tucson to see us on their way to and from InterAmericas Hash in Phoenix. We’re hoping we can get our kids here for Thanksgiving, but that’s a long way away (and yet will be here before we know it).

Tucson peeps: A friend of ours is working in support of an initiative on November’s Tucson election ballot, Proposition 204: Strong Start Tucson. If approved, it’ll provide scholarships for 8000+ of Tucson’s 3-5 year olds to attend high quality preschool through a 1/2 cent sales tax. I live in the county, not the city, and thus can’t vote on it, but I’d vote Yes if I could. Well, the least I can do to help is talk it up here at Paul’s Thing, and you live in the city and plan to vote in November, please give Proposition 204 your support.

Holy shit, this insane story about the Swedish journalist murdered by an eccentric inventor aboard his private submarine! As far as I can tell from news reports, there’s nothing in the accused man’s past to suggest he’s a killer, but apparently he is, and then some: not only did he kill her, he dismembered her body afterward. This is Jason- and Freddy Kruger-level stuff. Inhuman. Quentin Tarantino is probably already at work on the screenplay (shame on me for saying that … it’s a horrific crime, and I don’t want to make light of it).

As long as we’re linking to news items, I’m saddened to read about Joss Whedon, whose work (Buffy the Vampire Slayer, Firefly) I’ve always admired. Saddened but not surprised: how many movie and TV producers manage to resist temptation and stay monogamous? I’m assuming these extramarital affairs were consensual on both sides, and I’m ashamed to admit I’m curious which actresses consented. Why do I want to know? Because I had such a massive crush on Buffy and Willow, and oh golly on Kaylee from Firefly too! If Cordelia, Anya, or Faith did the deed with Joss, I’d say Meh, what else is new? Just don’t tell me it was any of my faves!