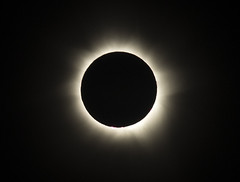 Look, I get it. The last full eclipse visible across the US was in the 1970s. The majority of Americans who went out to watch on Monday weren’t around in the 70s, so to a lot of people this one took on the proportions of a once-in-a-lifetime event. For sure, the press played it up with gusto, as they did Halley’s Comet in 1986.

I have to say, though, in Tucson the eclipse (like Halley’s Comet 31 years ago) was a disappointment. The moon blocked only a little more than 60% of the sun here, and if you weren’t looking directly at it through protective lenses, you never would have known it was happening. I was halfway through my 10 a.m. tram tour at the air museum when the eclipse was at its fullest, and as far as I could tell it was just another sunny Baja Arizona morning. If the temperature dropped, I didn’t feel it.

I enjoyed seeing all the photos posted to social media by friends who made the trek to Idaho and Oregon, standing together looking skyward with blinders on. Honestly, though, those photos would have been more interesting if giant buckets of ice had been involved. Which is to say the eclipse was two whole days ago and why is my Facebook and Twitter timeline still cluttered with eclipse posts? Get a grip, people!

Wait, I’m not quite done yet. Here’s a selfie I took at the air museum Monday morning, 15 minutes into the eclipse. See? You’d never have guessed if I hadn’t told you. 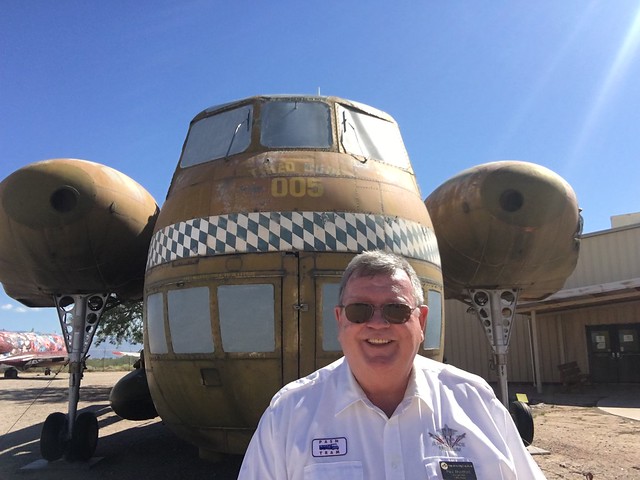 The beastly object looming behind me, like Trump breathing down Hillary’s neck during the debates, is a Sikorski CH-37B Mojave, a heavy-lift assault helicopter flown by the Army and Marine Corps from the late 50s through the early 70s … all of Vietnam, basically (in fact I have a friend who flew them for the Army during that war). Those side-mounted pods house big radial piston engines.

A friend sent an actual letter, so last night I skipped the news in order to write back. By the time I emerged from our home office the unelected president’s rally in Phoenix was over. Someone on Twitter said he’d rather read transcripts of Trump speeches than watch them on TV; that reading what Trump says rather than watching and hearing him say it is like donning a pair of eclipse glasses to protect the soul. God, yes! I cannot bear to hear that man’s voice. I cannot bear to see his piggish face. I hate him with my life, he does not leave the lizard alone.*

Speaking of Trump’s rally, a friend drove to Phoenix and was in the crowd of counter-protesters outside the convention center. She was in the heart of it, and says the cops started firing tear gas and pepper balls for no apparent reason other to disperse the protesters. The crowd had been peaceful to that point, according to her, and no one had thrown anything at the police. Interestingly, the cops started firing into the protesters just as attendees began streaming out of the convention center after Trump’s speech. I have no reason to question her account. I probably should have been there.

My motorcycle riding buddy and maintenance guru Ed loves to ride the California freeways and split lanes. It makes me nervous as hell, squeezing between lines of slow-moving or stopped cars, particularly since our Goldwings are wide machines and often leave us just inches to spare. I was casually watching videos on YouTube yesterday and it hit me that there are a hell of a lot of videos of motorcyclists being taken out by cagers** while lane-splitting. If there are that many videos, that means it happens a lot. I can take a hint.

Also, too, it’s depressingly easy to find YouTube videos of motorcyclists being assholes in traffic. FWIW, I try hard not to be one.

Sayonara, Dick Gregory. You were an inspiration, and you made a difference. Happy journeys, too, to Jerry Lewis. I remember loving Martin & Lewis movies when I was a kid, and several years ago I heard an enlightening underground tape of the two working blue in Vegas. I’m sure Lewis was a hell of a character in real life, but Dick Gregory is the one I wish I’d met in person, if only to say thanks for all he did.

One last eclipse-addled thought: you don’t suppose someone’s found a way to hack US Navy ship collision-avoidance systems, do you?

*I’m paraphrasing a famous 2011 tweet about the Muppets Movie. Here’s the original, which like a fine wine gets better with time:

I hate the muppets bcuz of the Pig girl, she was disgusting, i hate her with my life, she doesnot leave the lizard alone