I wrote this post in December 2009. The events I described occurred some 30 years earlier. Things that once seemed as if they’d never change did change … for the better, I have to admit.

My wife and I went to her salon and got pedicures. I haven’t quite digested the experience, or decided if I’ll ever get another, but (and this is not to my credit, I know) my thoughts have turned to manhood.

I went through F-15 flight training at the 555th Tactical Fighter Squadron at Luke AFB in Phoenix, Arizona, during the summer and fall of 1978. I was part of a six-man class; after we graduated and went off to Germany and the Netherlands, our class photo joined several other class photos on a wall in the Triple Nickel. I didn’t think about that photo again for many years. 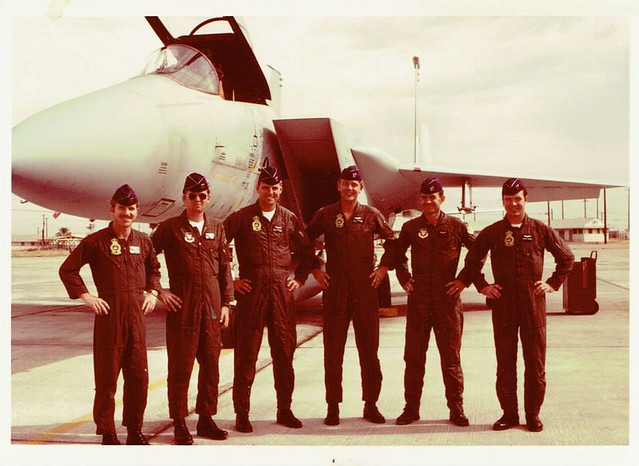 Seven years later, after back-to-back F-15 tours in Europe and Alaska, I went to staff college and a non-flying assignment at US Special Operations Command in Florida. In 1988 the USAF decided to put me back in fighters, this time in Japan. First, though, I had to return to Luke AFB for a short requalification course in the Eagle.

When I walked into the Nickel the very first thing I saw was my 1978 class photo, still hanging on the wall. Next to it was the photo of the class that had gone through training just before mine. In the middle of the photo, where a pilot’s face used to be, was a little circular hole. You could see eight pilots standing in front of an Eagle, but one of them had no face.

I flashed back to 1980, when a disturbing rumor flashed through the F-15 community: one of us was a homo! A few days later we found out it was true: an F-15 pilot from Kadena AB in Japan had propositioned an enlisted man during a drunken deployment to the Philippines; the enlisted man blew the whistle and the F-15 pilot was off the island — and out of the USAF — toot fucking sweet, literally overnight, which is how things happened then.

That’s the guy whose face was missing.

When I finished requal I went off to Kadena, former home of the Pilot with No Face, who had been a member of the 67th TFS Fighting Cocks. I confess that I was relieved when they put me into the 44th TFS Vampires rather than what every single pilot in the USAF has ever since called the “Fighting Cocksuckers.”

In the USAF it’s a tradition to wear special patches when you’re TDY, away from the home drome. At home I wore a name tag with my wings, real name, and rank. On the road, or on Friday nights at the club, I wore a patch with my wings and tactical call sign, which is Skid (click here for that story).

The first time I went TDY with the guys from the 67th, they all put on little rocker patches below their circular squadron patches. The rockers read “It Wasn’t Me!”

Everything I have just told you is the truth, as strange and politically incorrect as it may seem. Which may help explain why I’m so wrought up over a goddamn pedicure. People think things will change overnight when Obama finally gets around to shit-canning DADT (Don’t Ask Don’t Tell). No, it won’t be that easy. Just sayin’.

I’m happy to eat the words I wrote in the final paragraph. A lot has changed since I wrote them. As the gentleman who wrote in God and Country says, the story of the gay F-15 pilot and its role in the rivalry between F-15 Eagle and F-16 Viper drivers has by now assumed apocryphal status … has become an urban legend, in his words. But it did happen (and thankfully would not happen today). In fact, DADT went out with barely a whimper. 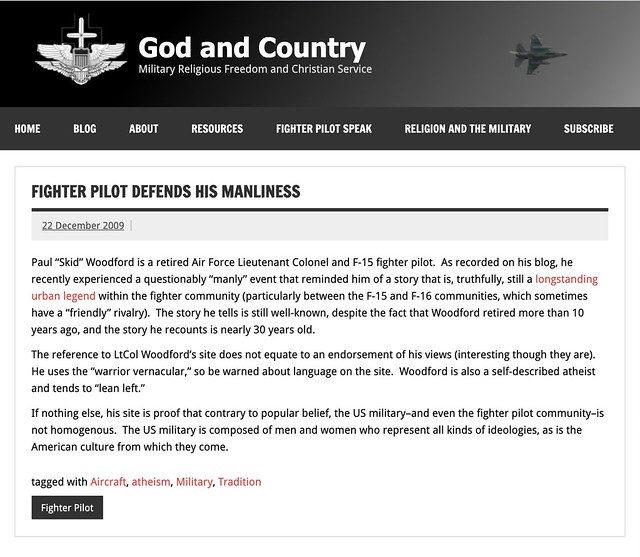