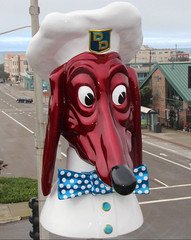 It’s time for another update on our ailing dachshund, Mister B, who’s such a good and deserving dog he gets this whole post to himself.

We dropped him off at the animal hospital again this morning, not because of any crisis or sudden worsening, but for a scheduled appointment — new x-rays and a progress check. He’s better, but far from cured — still coughing occasionally, a little feverish (not always, but sometimes), breathing better but not back to normal. Most worrisome to us, he continues to be listless, not his regular puppyish self. We’ll be picking him up later today, probably with another round of meds to administer (he may be listless, but he knows when we’re forcing pills down his throat and resists). So that’s where we’re at with our good boy. His condition weighs heavily on us. I’ll let you know if anything changes.

Two hours later: I just this minute inserted an upbeat Doggie Diner Wiener Dog photo, and here’s a fresh update to explain why. The doc from the animal hospital called five minutes ago. She confirms Mr. B has improved since his hospitalization two weeks ago, but wants to prescribe another two-week course of antibiotics, along with an anti-nausea medication to help him keep food down, and to see him once more when the new meds are gone. I’m feeling optimistic again, and the happy Doggie Diner photo reflects my mood.

Four hours later, and an even updatier update: Mr. B is home. Here we are, picking him up from this morning’s appointment — COVID-19 curbside protocols in effect: 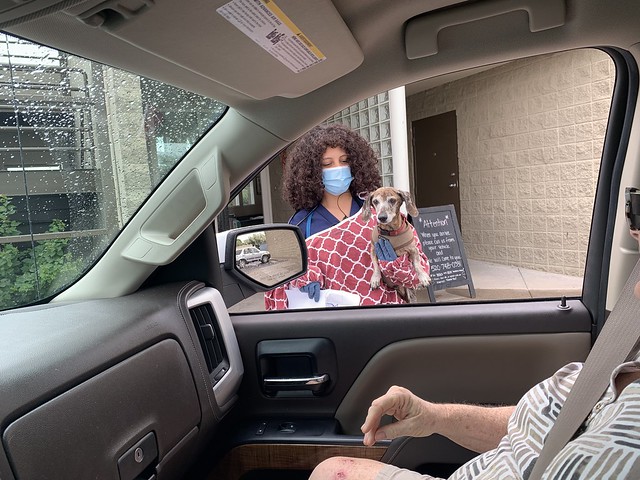 2 thoughts on “The German Patient”