A member of the Shanghai Hash House Harriers recently contacted a friend and fellow hasher, looking for sources of tunes in his club’s songbook. My friend forwarded the email to me, knowing my history as a hash songmaster (I put together one of the largest collections of hashing songs in existence, used by hash clubs and songmasters around the world).

There’s a certain amount of crossover between hashing and rugby, specifically the drinking songs we sing after trails and games, which are bawdy with a capital B. Many are so nasty – racist, misogynistic, homophobic, shockingly depraved, and just generally hateful — that I will no longer sing them, even in the shower. But at one point they were all in my songbook (I’ve since deleted some of the most offensive ones).

Which got me thinking. If collating 800-plus bawdy songs, toasts, and poems (some of which I wrote myself) into a several hundred pages-long document and self-publishing it counts as “writing a book,” I’m the author of a banned book. That is, a book that would be banned if Libs of Tik Tok knew about it!

I didn’t grow up with bawdy songs, and only started singing them when I was in my 30s, flying fighters in Europe with the U.S. Air Force (which is basically just a big rugby club with lethal weapons). Seven years ago, a group of sexual assault victims brought suit against the USAF. One of the items they introduced into evidence was a fighter squadron songbook, which they claimed showed an institutional culture of sexual violence against women. As far as I can tell, litigation is ongoing — the only online references I can find date back to 2015, the year the suit was filed. If anyone knows more, please clue me in, because it’s a story I want to follow.

I blogged about bawdy songbooks — mine and others’ — in April, 2015, and will share with you what I wrote then: 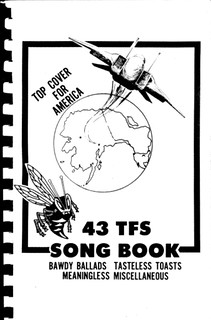 I started learning and collecting bawdy songs when I was in the Air Force; every fighter squadron I flew with had an unofficial songbook (that’s one of my old squadron songbooks on the left). Midway through my USAF career I started running with the Hash House Harriers, who, like rugby players and fighter pilots, share a love of bawdy song.

Eventually I put together my own songbook. Hash chapters all over the world use it; I get requests for copies every week. There’s a copy in the American Folklife Archive of the US Library of Congress. I’ve shared my versions of classic and little-known bawdy songs with scholars and folk singers.

Hey, it’s a hobby, but an increasingly disreputable one. Today, witness the witch hunts on Twitter, people are quick to take offense and pile on. There are a hell of a lot of songs in my collection that belittle women and depict them as depraved sexual wantons. Many are racist (though I must say not to the level of those frat guys on the bus with their n-word chant). The truly gross ones are traditional military songs about war: have you heard of a little ditty called Napalm Sticks to Kids? Jesus.

A group of sexual assault victims is suing the Department of Defense. They want to force the military to bring in outside investigators and stop allowing commanders to whitewash sexual assaults in-house, a topic I’ve addressed here before. This time they’ve introduced an “unofficial” USAF squadron songbook into evidence, claiming it exposes a “continuing culture in the Air Force and military that glorifies sexual violence.” The songbook bears the logo of the 77th Fighter Squadron, based at Shaw AFB in South Carolina. It probably looks a lot like my old 43rd Fighter Squadron songbook, and it’s very likely I know all the songs in it.

There are literally hundreds of organizations — hash chapters, military units, fraternities, athletic clubs, fire and police departments, even corporations — whose members Xerox and pass around unofficial songbooks. Unofficial they may be, but all the ones I’ve seen have organizational, corporate, or unit labels on their covers. In the wrong context — a courtroom, say, or on the front page of a newspaper — they look mighty damned official.

I no longer sing the really offensive songs in my collection (in fact I’ve deleted a few of the worst ones), but the songbook’s out there, with my name on it, and there’s no taking it back. Good thing I’m not looking for a job, I guess.