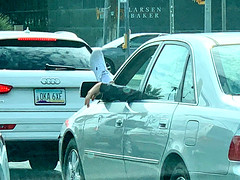 They might not have counted this Costco shopper’s vote yet, but it’s starting to look like red state Arizona’s turning blue.

As of a couple of hours ago, Senator Mark Kelly has a slim lead, Representative Raul Grijalva a substantial one, and Katie Hobbs, another Democrat, might be our next governor. Grijalva excepted, the count remains close and I don’t want to jinx it, so no more election talk for now.

I bit down on an unpopped corn kernel Sunday, breaking off an old crown on a lower molar. Our dentist filed the jagged edges yesterday and I’ll get a new crown in January. Why the delay? We’re changing dental insurance and the new plan won’t be in effect until the start of 2023. Luckily for me, the nerve isn’t exposed, and other than constantly worrying it with my tongue, I can live with the broken tooth until then. 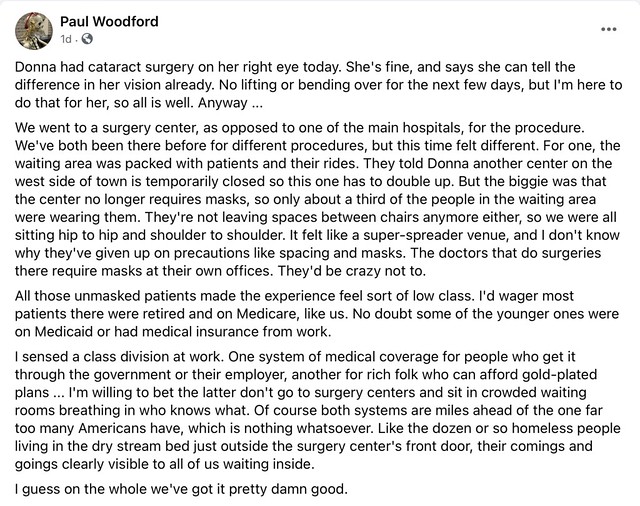 Since writing that, I’ve taken Donna to a follow-on appointment at our ophthalmologist’s office, then paid my own visit to our dentist. I’m going to have to back away from what I said in the Facebook post, because masks are now optional at both clinics, and they’ve stopped blocking off every other chair in their waiting rooms. And at both places, as at the surgery center on Monday, mask-wearers are a distinct minority.

We’re not the only ones spending time in medical offices and surgical suites: slipping Mr. B’s harness over his head the other day I noticed his snout was swollen. Looks like he has an abscess or a bad tooth, probably both. We can’t get the poor guy in to the animal hospital until Sunday, but we did make a run there to pick up doggie antibiotics and pain relievers, and since he’s been taking them his swelling has gone down. Just coincidentally the animal hospital called a day later to remind us Fritzi and Lulu are due for 90-day valley fever blood tests. We arranged to bring them in on Sunday as well. I’ll be sure to take note of the animal hospital’s masking policy for sick pets’ human escorts!

I’m reading a science fiction novel, “The Spare Man” by Mary Robinette Kowal, in which a stylish Thin Man couple and their dog solve a murder mystery aboard an interplanetary cruise ship bound from Earth to Mars. Jarringly, to me at least, all the characters include their preferred pronouns when introducing themselves. As in:

You see this in Twitter profiles today, but I’ve yet to hear anyone verbalize his/her/their preferred pronouns when speaking out loud.

I figured if I kept reading I’d inevitably come across a ze/zir, and halfway through the novel there ze was. As with previous woke pronoun novels I’ve read, the author doesn’t do anything with the ze/zir character, zwhich remains in the background. Just making a point, I guess. A few chapters later, the main character, a she/her, mentions a potential suspect who isn’t even present: “But what about Mx Smith, he/him?” Really? Like it’s her job to do that in his absence? What if she’s wrong and he’s actually a ze? Let him introduce his own damn self when he shows up, lady.

Oh, yeah, did I mention Mx? It’s pronounced mix, and in this future has completely replaced mister, missus, miss, and miz.

At least there are still plenty of he/hims and she/hers in the future, comfortable with the gender they project but polite enough to specify pronouns when introducing themselves lest the they/thems and ze/zirs feel like oddballs.

In an earlier science fiction novel, “The Calculating Stars,” Ms Kowal included several key woman, minority, and gay characters, explaining in an afterword that while women, minority, and gay scientists and engineers in fact make significant contributions space exploration, they’re mostly written out of the histories. Her goal, she said, is to write them back in. And I admire her for that.

I wish she’d have explained her emphasis on gender, which in the end adds almost nothing to the plot, in the afterword to this novel. Perhaps if she had, my reaction wouldn’t be so negative. I feel force-fed, not enlightened. Will future us really dive so deep into titles and pronouns? Will this novel be readable in fifty years, or even ten?