I started riding motorcycles when I was 15, and still ride today. Over the course of 60 years, cagers (car drivers) have tried to kill me more times than I can count. Two came close, scoring direct hits and sending me to hospital. For a long-time motorcyclist, I’m probably luckier than most.

I still get enraged when I read or see news reports of drivers injuring and killing motorcyclists and getting away with it. The excuse is always “I didn’t see him, officer,” and cops let the fuckers skate almost every time. Our first and most important job as drivers is to see and avoid, whether it’s another car, a truck, a motorcycle or bicycle, a pedestrian, or a goddamn tree, and if you fail you should at least get a ticket and have to pay a fine. Do it twice, you should have your license revoked. Do it three times? Does death by hanging seem reasonable? It does to me.

It’s the same thing with flying. See and avoid is Job One when it comes to avoiding midair collisions, and yet pilots fail to see other aircraft in their flight path all the time. Like this:

I can’t fault the pilots taping the video: they’re in a high-winged light aircraft, unable to see traffic closing from behind and above. The pilot of the red & white Cessna that overtakes them sure as shit could see though, and obviously wasn’t looking. Why? He or she was probably focused on the runway. It’s amazing what we don’t see when we get tunnel vision.

When I went through the initial phase of USAF flight training in Texas, flying Cessna 172s, my instructor was one of two Norwegian brothers working for the program. They were building flying hours toward air transport ratings so they could go home and start pilot careers with Scandinavian Airlines. The day I graduated from the lead-in program, my instructor’s brother was killed in an easily-avoidable midair like the one that almost happened in the video: he and a student were lined up with the runway to land when they were overtaken from behind and above by a solo student in another Cessna. The solo student pancaked onto the top of their aircraft, knocking them out of control and causing them to crash short of the runway. My instructor’s brother and his student were killed; the solo student managed to land his airplane and lived.

I was never so happy to move on to jet trainers and eventually fighters, with bubble canopies and better visibility. Even so, over the course of my flying career I experienced three near-midairs, all with other F-15s during dogfights. In two of the incidents, both the other pilot and I saw one another in time and maneuvered to prevent the collision. In the third, I didn’t see the other Eagle until the last second, nor did he see me, and it was just dumb luck we didn’t hit.

Here’s another near miss, same circumstances, just as inexcusable:

So anyway, next time you’re flying, driving , or riding, and you start to wonder “Does that son of a bitch even see me?” You should probably put your money on “No, he doesn’t.”

Different but still air-minded: a memory from the days we worried about the first days of WWIII in Europe, when the Russians would conduct first-strike attacks on NATO airfields to crater the runways, making it impossible for us to launch fighter/bombers with tactical nuclear bombs on one-way missions against targets in Russia and Warsaw Pact nations. Is to bomb runway? Ha! Hold my beer, Ivan!

The acronym for this pre-Harrier way of getting off the ground without a runway was ZELL: zero length launch. It never went beyond the testing phase, probably because the advent of intercontinental ballistic nuclear missiles rendered it moot.

By the way, I love the style of vintage military documentary films, with the martial music and strident-voiced narrators. This one’s a primo example of the genre. And check out the Hun driver’s post-launch victory roll! He earned the right to do it!

Speaking of acronyms, I talked about FOD on Facebook and set off a discussion about what it stands for. When I was in the USAF, FOD stood for “foreign object damage”; i.e., the damage caused to jet engines when they ingest foreign objects. I noted that FOD was also used to refer to the objects themselves, as in this piece of FOD I found in the engine intake of a DC-10 at Pima Air & Space Museum: 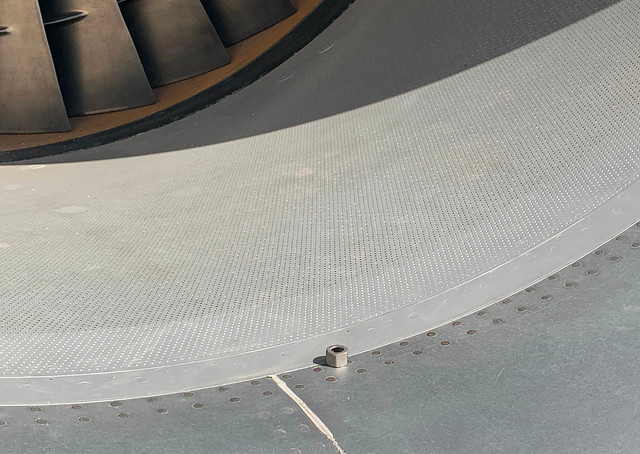 From a linguistic point of view, calling that nut FOD rubs me wrong. It’s an object, definitely foreign, but it’s not damage. If someone starts that engine it’ll cause plenty of damage, but so far it hasn’t done anything!

Apparently the military and the FAA agreed, sometime in the early 2000s, to change the meaning of the D in FOD from damage to debris: FOD now stands for “foreign object debris,” which makes more sense, and I wish I’d thought to suggest it myself decades ago.

But wait. Now it’s a problem the other way around. We still call the damage caused by debris FOD. As in, if someone leaves a wrench in the intake and it gets sucked into the engine, we say the engine has been “FODded out.”

Am I the only person in the world who worries about shit like this? Probably. Well, just for the record, in my book FOD can stand for both “foreign object debris” and “foreign object damage,” depending on whether you’re talking about the debris or the damage it causes.

And having caused enough damage for one day, I’ll sign off.